Ridley Scott to explore whether Moses was agnostic, etc. 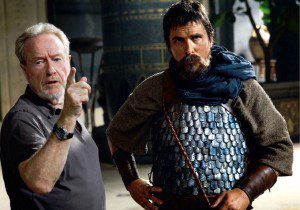 The latest issue of Entertainment Weekly has an article on ‘Hollywood’s New Holy War’. The hook for the story is the three Bible movies coming out this year, but the story itself takes a broader look at how movie studios have been openly courting the Christian demographic ever since the surprise success of The Passion of the Christ ten years ago.

Sometimes, as the article notes, the studios’ efforts have been pretty successful (The Chronicles of Narnia, The Blind Side), and sometimes they have been… not so successful (The Nativity Story, Evan Almighty).

But what catches my eye is a sidebar on Ridley Scott’s life-of-Moses movie Exodus, which has a couple of new quotes from Scott and Christian Bale:

RIDLEY SCOTT’S Exodus (out Dec. 12) will tackle all the biblical set pieces — the plagues, the burning bush, the parting of the Red Sea — but Christian Bale plays Moses as a swarthy action hero who leads the Israelites out of Egypt. Think Gladiator, not The Ten Commandments. “He’s a fascinating character when you get away from the Sunday-school idea,” Bale says. “He’s a surprising character for me, and very extreme. [With Moses] there are no half measures.”

Scott says the film, shot in 3-D, will focus on Moses’ achievements as well as his humanity — early on, he even questions his faith. “Was he agnostic? Was he a person who simply believed in dust-to-dust and ashes-to-ashes?” Scott says. “Was he cynical about the idea of an afterlife? We address all those things.”

The Bale quote is very similar to something he said back in November, but the Scott quote is new, to me at least. Scott has talked in the past about how his own atheism or agnosticism might influence the movie (e.g. “I’m an atheist, which is actually good, because I’ve got to convince myself the story works”), but this is the first time I’ve seen him allude to the character’s agnosticism.

You might think that the film would resolve this question by the time Moses has his encounter with the burning bush, but keep in mind this quote from Joel Edgerton, who plays Rameses, which appeared in Total Film last month:

For what it’s worth, this whole thing reminds me of some of the discussion that took place around Scott’s earlier film Kingdom of Heaven nine years ago. The junket for that film, which I attended, included a panel discussion featuring three historians, at least two of whom noted that the Crusaders in that film were less medieval than perhaps they should have been.

“Many of the people in the movie have, I think, a more modern sensibility,” said Nancy Caciola, referring specifically to the agnostic main character’s fair-minded ecumenism. Her point was echoed by Donald Spoto, who noted, “Atheism was unknown [in the Middle Ages]. People may have been rotten to the core and may not have practiced religion, but I think it is indefensible to say that anyone would really claim not to believe in God. That was bred in the bone.”

So it seems that Scott may be injecting more of that modern agnostic sensibility into his movie about ancient Hebrews and Egyptians, though how far he will go with it remains to be seen.

For now, the Entertainment Weekly article notes that the studio plans to promote the film “more as a Gladiator-style action epic than a biblical movie per se.” So as unconventional as Exodus might be, it sounds like the studio is trying to avoid the situation Paramount finds itself in right now, where it originally said Noah would be “a close adaptation of the Biblical story” and now finds itself backtracking somewhat.

Here is the page from which the sidebar comes: 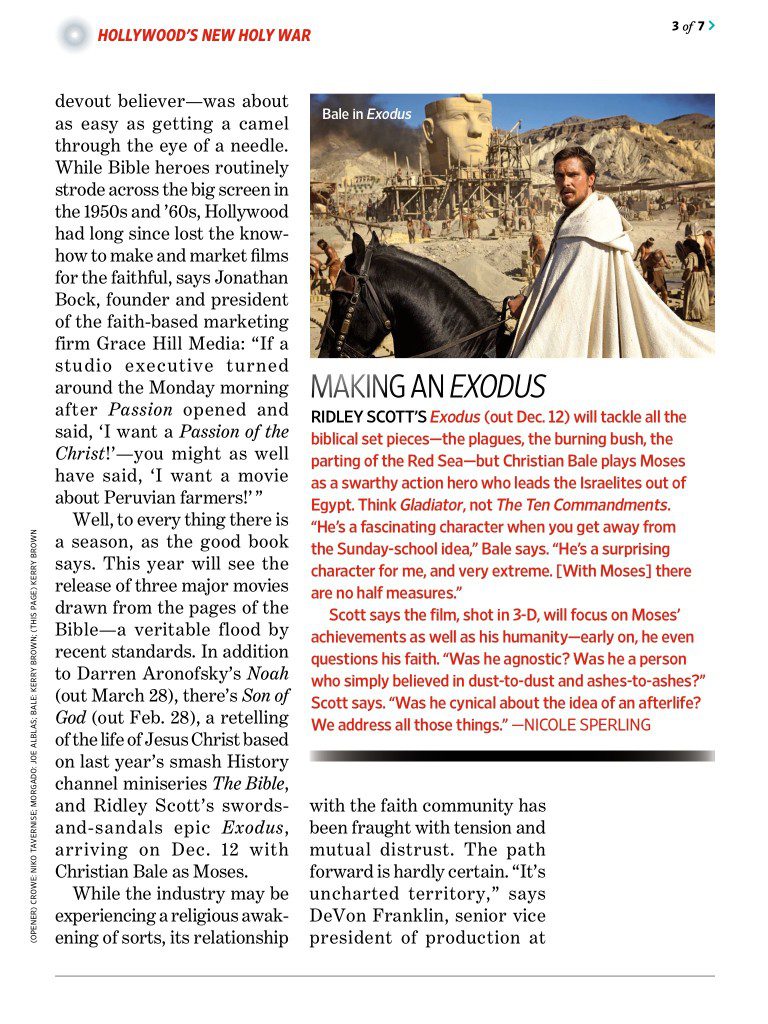 March 2, 2014
Quick updates on A.D. and The Dovekeepers
Next Post

March 3, 2014 Is seeing a Bible movie on opening weekend more important than going to church? Is it a way of "honouring God"?
Recent Comments
0 | Leave a Comment
"In 1972, yes. The movie was made in 1956 but the ratings system didn't exist ..."
Peter T Chattaway One of the reasons I do ..."
"And to think... this movie was rated G? It was."
Bishop One of the reasons I do ..."
"John 7:5 states explicitly that the brothers of Jesus did not believe in him, at ..."
Peter T Chattaway The Chosen starts shooting its second ..."
"Thanks. There is a whole other anecdote in between those two verses. Other relatives, sure, ..."
tmirus The Chosen starts shooting its second ..."
Browse Our Archives
get the latest from
FilmChat
Sign up for our newsletter
POPULAR AT PATHEOS Entertainment
1