Quick updates on A.D. and The Dovekeepers 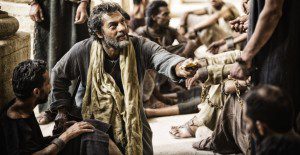 Son of God producers Roma Downey and Mark Burnett gave lots of interviews in the days leading up to that film’s theatrical release, and in a few of those interviews, they dropped a few hints about their follow-up projects A.D. and The Dovekeepers, both of which will also take place in first-century Palestine. Here’s a quick summary of what they’ve said.

First, in chronological terms, A.D. will start at the crucifixion of Jesus and cover the next 40 years of Jewish and Christian history, until the destruction of the Temple in AD 70, while The Dovekeepers will start with the destruction of the Temple and continue through to the Roman siege of Masada, which ended in AD 73. It’s not clear whether the two shows will air in chronological order — they’re being produced for different networks — but those are the historical periods they will cover.

Since A.D., a 12-hour mini-series, will cover the same basic territory as the last hour-and-a-half of The Bible, the question naturally comes up as to whether the new show will use the same actors as the earlier show. Burnett says they hope Diogo Morgado will come back to play Jesus again, but beyond that he doesn’t say.

Also, while Burnett and Downey have a commitment for one season’s worth of episodes, they hope A.D. will last ten years and cover the growth of the early church all the way up to the death of Constantine, the first Christian emperor, in AD 337.

(At this point I can’t help noting that, if Hans Zimmer comes back to write music for A.D. the same way he did for The Bible, then this could become the second Zimmer-scored production to feature the First Ecumenical Council in Nicaea in AD 325 — the other such film being The Da Vinci Code, where Nicaea appears in a flashback.)

Regarding the first season of A.D., Burnett indicated that he wanted to “take the spine of the Book of Acts” and “build around what was going on in Pilate’s mind, what was going on with Caiaphas”. But Pilate and Caiaphas were both deposed in AD 36, so they weren’t actually around for most of the events that Acts records.

A.D. is currently set to start shooting in Morocco by the end of this year. It’s not clear when cameras will start rolling on The Dovekeepers — Burnett and Downey just received the first draft of the script — but presumably it will go into production not long after that, since both shows are currently set to air next year.

Here are the relevant sections of the interviews from which I gleaned this material. First, via my Patheos colleague Rebecca Cusey:

What can you tell us about your upcoming projects, AD and The Dovekeepers?

MB: We absolutely had thought to write the outline for AD while in Morocco [as they filmed The Bible] because we’re living in the environment and thinking, boy, how did 12 guys take down Rome? Because really, wouldn’t it have been obvious that Jesus crucified, resurrects, there starts to become problems around the growing of realizing the son of god has been on earth … strange they didn’t just kill them all and just get rid of it that way.They weren’t exactly above killing everybody, were they? They crucified 500 people a day at one point. But it’s amazing you look at the four groups, the disciples, the Herod family who were insane, literally insane, the Romans who just wanted to keep peace and collect taxes, and the temple authorities who were literally battling against the people of the way and Rome at one time, it led to 40 years later, the temple finally falls, right? So that’s AD, AD is really through the line of Acts through Revelation, built around a huge drama about what was going on. By the way, it’s an amazing amount of church leaders who said to us, well, that’s a really important story because no one has really considered that much what they really went through.

And then Dovekeepers takes place actually, it starts, at the destruction (of the temple).

RD: Clearly we love this period of time and stories that show the triumph of human spirit in spite of the terrible times they were living through. And both stories have that as the heartbeat. Dovekeepers is a beautiful novel written by Alice Hoffman. In fact we’ve just gotten our first draft outline of the screenplay today, so we’re eager to get to read that, we’ll probably do that on the flight back. And it’s a great story that’s going to be a four hour miniseries, a special event miniseries on screen 2015 on CBS. And AD, we have a 12 hour commitment from NBC to make that series and we’re hoping that will be an ongoing series, that it won’t just be a one-off.

Is it through Revelation or does it go past, does it go into the early church fathers?

MB: If people are watching, it could absolutely go on. We’ve really thought of taking it to AD 337. You know what happens then, right?

MB (Laughing): You passed. Your teacher would be so happy.

Then, via Capone at Ain’t It Cool News:

Capone: I saw in December that you got the greenlight to do the 12-part series “A.D.” What is that going to cover exactly?

RD: It will only be 12 parts in the first year. We’re hoping it will go through 10 years.

RD: It will emotionally reset there.

MB: So one logline would be, how did 12 guys take down Rome? How easy would it have been for Rome to kill the 12 disciples? It could have been done, but it wasn’t God’s plan. But how did they survive against all odds? Because the Holy Spirit came. So now you’ve got Peter healing people. There’s people who the Holy Spirit killed in Ananias and Sapphira for lying to them.

RD: It’s all through the Book of Acts.

MB: Yeah, it’s unbelievable. And so if you take the spine of the Book of Acts, then you build around what was going on in Pilate’s mind, what was going on with Caiaphas, it’s very “House of Cards.” And the through line is, this group of disciples, ever growing against all odds. So the purpose of the series is for 2.2 billion Christians to look at it and say, “Is that what those guys went through to make it okay for us after the crucifixion?”

RD: It’s extraordinary that it began with 12 men, and that it is now 2.2 billion people. There’s an incredible line in SON OF GOD that comes from Pontius Pilate. He’s laying getting a massage, and his wife comes in and says, “You shouldn’t have done that. You shouldn’t have killed him.” And he says, “He’s just another Jew.” And she said, “No, he was different.” And Pilate said, “He thought he was, but he’ll be forgotten in a week.” And here we are in 2014 and it’s like, I don’t think so. I don’t think he’ll be forgotten in a week.

Capone: Are you going to be able to get the same actors to reprise their roles?

MB: Possibly. We’re looking at all of that. Certainly in some cases, absolutely. We’ve got to get through it, but in the movie, the delicious relationship between Caiaphas and Pilate, which is this absolutely unsteady and uncertain dance of politics, is all about trying to preserve their own needs.

MB: A real power struggle, and then you’ve got Diogo Morgado on the screen, who’s the lion and the lamb. We didn’t think that the word “meek” meant weak, so we have a big 6-foot 3-in. actor.

RD: Yeah, we wanted a strong actor, but an actor who could also play gentle and compassion and present the lion and the lamb, and he does both so beautifully. He gives such a lovely, nuanced performance in the central role. I had such a privilege to step into the role of Mary his mother, and those scenes around the foot of the cross in particular were so poignant to film. I can’t even begin to image what a mother would have been going through to see her own child brutally murdered in that way. We know that Mary was the mother of the son of God, but she was also the mother of the son, and playing the humanity of that was tough. And we know that Jesus only said seven things from the cross, and one of those things was that he took time to make sure his mother was taken care of, which just says so much about him. But yeah, that was amazing. So we will be going back for “A.D.” to Morocco, and we’ll be filming by the end of this year. We’re heading back down there, so we’re very excited.

“We’re working on a series called AD, which starts at the crucifixion and we’re hoping Diogo will be in it. It tells this dramatic story of what is going on in that first century,” he added. “The disciples didn’t know they were in the Bible. They were living their lives; they were following a charismatic leader who they think may be King David, and following them. It’s only revealed much later that it’s actually the Son of God. So very tense times, but in that epic scale there is this intimate, beautiful love story.”

February 28, 2014
Noah: a new TV spot, a new magazine article, and one man's list of five positive things about the film
Next Post

March 3, 2014 Ridley Scott to explore whether Moses was agnostic, etc.
Recent Comments
1 Comment | Leave a Comment
"This was a refreshing read. I'm an average fan of Hellboy but I'm also a ..."
Andrew Mathews Doug Jones on Hellboy and Christianity.
"Great interview! One thing I've wondered since watching Season 1 is why they didn't include ..."
A.J. Cattapan Interview: The Chosen writer-director Dallas Jenkins ..."
"Earth actually does exist in the Dark City universe. Early in the film when John ..."
Edward Clint Dark City and the ambiguous ending.
"I don't always agree with your opinions, but your reviews are never less than interesting ..."
Laura-Lee Rahn The top-grossing Italian movie of 2019: ..."
Browse Our Archives
Follow Us!