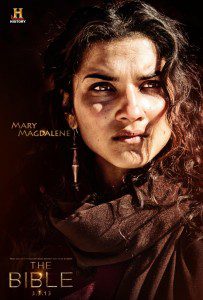 I had a chance to watch The Women of the Bible, the two-hour Lifetime special that airs before The Red Tent tonight, and while I don’t have a whole lot to say about the special as a whole — it’s basically a series of interviews with female professors, church leaders and at least one rabbi, interspersed with clips from last year’s miniseries The Bible — one scene did jump out at me that fans of The Bible might want to know about.

Specifically, there is a scene in which Jesus meets Mary Magdalene for the first time — and I don’t believe this scene was included in either The Bible or its big-screen spin-off Son of God.

At the end of the sixth episode of The Bible, Jesus had just one follower, i.e. Peter, and at the beginning of the seventh episode, he had several more, including Mary. Similarly, Son of God used a quick montage to take us from one point to the other, without getting into the details of how Jesus gathered his various disciples.

But in The Women of the Bible, a narrator mentions that Mary Magdalene was “a woman possessed by seven demons,” and we see Jesus and his followers walk into a town and encounter a crowd that is harassing Mary. “Leave me alone,” she says, before she stumbles across Jesus and kneels before him. “Don’t be afraid,” Jesus says. “What is your name?” Mary replies, “Mary of Magdala.” And then the special returns to the talking heads, who clarify, among other things, that there is absolutely no evidence anywhere to support the later western tradition that Mary Magdalene was a prostitute. (The eastern churches have never subscribed to that theory.)

As ever, I applaud The Bible for avoiding that particular cliché, and I am glad to see that The Women of the Bible takes things even further by spelling out very clearly that there is no basis for that tradition. I wonder, though, if the makers of The Bible originally planned to depict Mary this way, and then thought better of it.

I say this because, in the scene where Jesus meets Mary, there is no evidence of the demonic possession that the narrator mentions, and also because Mary is dressed in red, a colour that is often associated with prostitution. Is the crowd harassing her because she’s a possessed woman and therefore “crazy”, like the Mary Magdalene we see in The Miracle Maker (a film that depicts the exorcism of Mary quite clearly)? Or is the crowd harassing her because she’s an “immoral woman”? Or is it a bit of both? Without the narration provided by the TV special, there’d be no way to tell.

In any case, it’s always fun to come across a new scene from a film or series that you thought you already knew pretty well, and I appreciate the way the special clarifies what is and isn’t biblical about this character, however it got to that point.

The Women of the Bible airs three times this week, beginning tonight at 7pm.

Update: Mark Goodacre, who was one of the scholars consulted by The Bible’s producers, has confirmed that the seventh episode was going to begin with a scene of Mary’s exorcism — and that it was going to show Satan stalking her.

In the comments below this post, Kelvin Cedeño has also noted that there is footage of this scene and its filming in one or two of the Blu-Ray’s bonus features.

Cedeño says he wondered at one point if this scene would be added to Son of God, but as we know now, it wasn’t. The producers famously “cast Satan out” of that movie because of a bizarre political controversy, so presumably they didn’t feel like adding any new footage of him, even if that had been their plan at one point.

This may also explain why so little of the scene was included in tonight’s special.

December 5, 2014
Horses fall to their doom in a new Exodus: Gods and Kings clip, and four other new videos
Next Post