Christianity Today speaks to the director and star of the indie Jesus film Last Days in the Desert January 12, 2015 Peter T. Chattaway 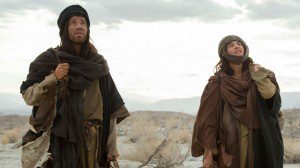 The film won’t premiere at Sundance for another 13 days, but Christianity Today’s Alissa Wilkinson posted an exclusive interview tonight with Last Days in the Desert director Rodrigo Garcia and his star Ewan McGregor, who plays both Jesus and Satan in the low-budget film — and along the way, she offers a few review-ish opinions of the film itself, all of them positive.

Among the more interesting tidbits:

You can read the whole article — and see a few new pictures from the film — here.

January 12, 2015
Newsbites: The Dovekeepers meet the press! Ben-Hur gets another actor! And A.D. gets a new TV spot!
Next Post

January 13, 2015 Watch: The trailer for animated film Ooops! Noah Is Gone...
Recent Comments
0 | Leave a Comment
Browse Our Archives
get the latest from
FilmChat
Sign up for our newsletter
POPULAR AT PATHEOS Entertainment
1