Newsbites: The Dovekeepers meet the press! Ben-Hur gets another actor! And A.D. gets a new TV spot!

Newsbites: The Dovekeepers meet the press! Ben-Hur gets another actor! And A.D. gets a new TV spot! January 12, 2015 Peter T. Chattaway 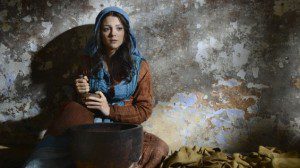 Today was a big day for news about movies and TV shows set in first-century Judea and produced (or co-produced) by Mark Burnett and Roma Downey.

1. First, Downey and several actors from The Dovekeepers met with reporters to promote their miniseries, which concerns four Jewish women who live through the Roman siege of Masada.

The presentation, which took place at the Television Critics Association’s Winter TV Press Tour in Pasadena, was covered by Deadline, Variety, The Hollywood Reporter, The Wrap, the Los Angeles Times, USA Today, the Associated Press and others.

CBS also released a trailer for the miniseries, which airs March 31 and April 1:

2. Second, Sofia Black D’Elia was cast as Judah Ben-Hur’s sister Tirzah in Timur Bekmambetov’s upcoming remake of Ben-Hur. Two months ago there was talk of Ouija star Olivia Cooke being cast in the role, but alas, it was not to be.

January 11, 2015
Box office: Exodus: Gods and Kings slips some more, but is now the third-highest-grossing Bible movie worldwide
Next Post

January 12, 2015Christianity Today speaks to the director and star of the indie Jesus film Last Days in the Desert
Recent Comments
0 | Leave a Comment
Browse Our Archives
get the latest from
FilmChat
Sign up for our newsletter
POPULAR AT PATHEOS Entertainment
1