Watch: The trailer for animated film Ooops! Noah Is Gone… 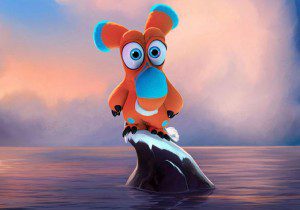 Yet another animated film about Noah’s Ark, told from the point of view of the animals, is in the works. In fact, according to Variety, it is already pretty much finished, and will premiere in Germany this summer before going elsewhere.

The film is called Ooops! Noah Is Gone… and it concerns two creatures called Nestrians — a father and a son — who are not allowed on the Ark but sneak aboard anyway with the involuntary help of a mother and daughter called Grymps. The kids end up falling overboard, and it’s up to their parents to turn the Ark around and save them from all the predators out there.

Here is the film’s trailer, via Jerry Beck at Animation Scoop:

As I’ve noted before, quite a few animated films about Noah’s Ark have been put into development over the past decade. The two most current examples are:

Films that used to be in development but might not be any more include:

At least two quasi-Noah-themed cartoons have been released overseas as well, in the last few years, and are now at least partially available online:

January 12, 2015
Christianity Today speaks to the director and star of the indie Jesus film Last Days in the Desert
Next Post

January 13, 2015 He played Xerxes in 300, now he's Jesus in the new Ben-Hur
Recent Comments
0 | Leave a Comment
Browse Our Archives
get the latest from
FilmChat
Sign up for our newsletter
POPULAR AT PATHEOS Entertainment
1