We’ve known for some time that Cliff Curtis, who plays the part of Jesus in Risen, took his role very, very seriously. In September 2014, he refused to speak to journalists about one of his other films (he did pass notes, though) because he was in the middle of shooting Risen and he had taken a vow of silence for the duration of the shoot.

Curtis is definitely talking now, though.

A few days ago I posted videos of some interviews that he had done to promote Risen, and now an interesting print interview has come our way, via Scout.

Among other things, Curtis says he had always wanted to play the part of Jesus, but he had always assumed he would never get to do so because (a) his skin and hair are too dark, (b) he often gets cast as villains, and (c) he is now in his late 40s and thus a fair bit older than Jesus was. (Luke 3:23 says Jesus was “about 30 years old”.)

When Curtis did get the part, he decided to isolate himself on the island of Malta and live “monastically” for a solid month. When cameras started rolling on the film, he avoided speaking to his co-stars, but he did find other ways to relate to them:

“Kevin (Reynolds), the director, did request that I start to engage the apostles more, so I found ways without speaking. My first encounter that I wanted to have with them is I wanted to wash their feet without words, because that’s what Jesus would do.”

He added: “It was lunch break and they didn’t know what was going on. ‘What’s this dude doing?!’ I wouldn’t say anything. They were just eating their lunch and I’d just point to them to come to me and I’d point to a seat and wash their feet.

“It was beautiful, humble and very authentic. They each had different reactions which built our relationship… It was a great way to be present for them without speaking.”

There is no foot-washing in the film itself, incidentally. The first time we see Jesus, he is already dead on the cross — so the Last Supper and all that happened there took place well before the movie begins. Still, it’s interesting to know that there was some foot-washing behind the scenes, and that the actors bonded in this way.

Also worth noting: one of the apostles in Risen is played by Selva Rasalingam, who played Jesus in The Lumo Project’s The Gospel of John and had thus already washed his own disciples’ feet two years ago. What goes around, comes around.

— The picture above comes from the first trailer for Risen. The picture below shows Jesus and Peter arguing about the foot-washing in The Gospel of John. 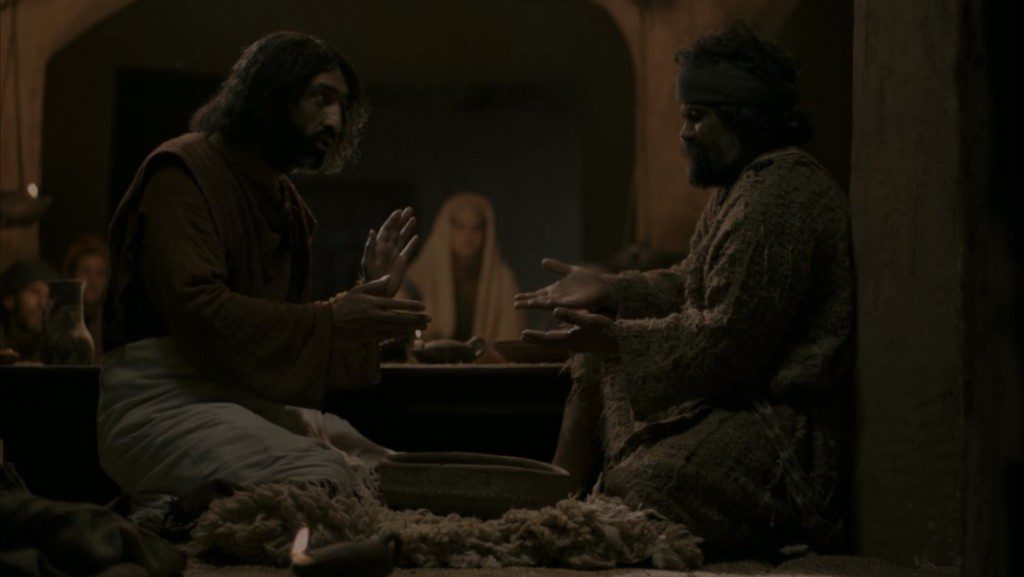 January 30, 2016
Brazil's biggest home-grown box-office hit could be a Bible epic about Moses, re-edited from a local TV series
Next Post

February 1, 2016 Hail, Caesar! and other movies about making Bible movies
Recent Comments
0 | Leave a Comment
Browse Our Archives
Follow Us!