A new movie about the biblical judge Deborah is in the works March 4, 2019 Peter T. Chattaway

Well this is a pleasant surprise. Today brings news not just of another Bible movie in the works, but of a movie that tells a story that has almost never been depicted onscreen — and, what’s more, it is a story with a strong female protagonist.

Deadline reports that Third Coast Content and Sycamore Pictures are teaming up for a film called Arise, which will tell the story of Deborah, the female prophet and judge who led the Israelites in a war against the Canaanites according to Judges 4-5.

The film is being co-written by Paige Collins, a publicist who has worked on a number of “faith-based” films over the last several years, and Mark Freiburger; and its producers will include Collins and Third Coast Content CEO Ben Howard, whose credits include everything from VeggieTales (including their big-screen adaptation of the book of Jonah) and Steve Taylor’s The Second Chance to the films of the Kendrick brothers (Fireproof, War Room) and the Erwin brothers (Moms’ Night Out, I Can Only Imagine).

“Arise represents a giant step forward for this genre as the first faith-based film to depict a woman in a position of leadership and authority,” Howard said in a statement. “It couldn’t be timelier. I believe the themes of women’s empowerment, justice and faith, along with a strong, dynamic female lead in the character of Deborah will resonate with our core audience.”

Deadline describes Deborah as “the only female warrior in the history of ancient Israel.” That’s an interesting description, as it has always been my impression that, while Deborah was a sort of political leader in ancient Israel, she left the fighting to men like the general Barak. However, Barak did insist that Deborah “go with” him when his army confronted the Canaanites, so who knows? Maybe Deborah wore a suit of armour on the battlefield herself. Then again, when Deborah agrees to “go with” Barak, she says the honour of killing the Canaanite general will go to a woman, rather than a man, and the woman in question turns out to be someone who is living in a tent where the general goes to hide. Presumably Deborah’s prediction — which assumes it would have been unusual for a woman to kill the general — would have made less sense if there were women in the Israelite army and Barak had always known that there was a good possibility that one of those women might end up killing the Canaanite general. But perhaps there are other ways to interpret Deborah’s prediction. In any case, this is something I haven’t thought about much, and if there are other examples of female warriors in the Canaanite region in the early Iron Age, I would definitely be interested in hearing about them.

Incidentally, the Bible also introduces Deborah as “the wife of Lappidoth” — and then says absolutely nothing else about her husband, or indeed about any other family connections she might have had (children? parents? siblings?). But the fact that we know she was married, at least, does provide an opportunity to explore how a male Israelite of that period might have handled being married to a prophet and a judge whose authority was apparently accepted by the majority of their fellow tribespeople.

The news about this film also intrigues me because there aren’t that many films based on the book of Judges — aside from the many movies about Samson — and I can’t think of any that have been made about Deborah specifically. My friend Matt Page noted a few years ago that the events of Judges 4-5 were adapted for a silent film called Jaël et Sisera (named for the Canaanite general and the woman who killed him), but “even in this case, the story’s usual leading lady – Deborah – is omitted.” (See also this post of his.)

Anyway. I am very, very curious to see what becomes of this project.

— The image above is from a 19th-century depiction of Deborah by Gustave Doré. 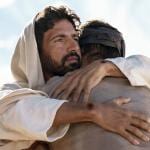 February 1, 2019
Watch: The trailer for the History Channel's Jesus: His Life
Next Post

March 12, 2019 Watch: The teaser for The Chosen, which aims to be the first multi-season TV series about Jesus
Recent Comments
0 | Leave a Comment
Browse Our Archives
get the latest from
FilmChat
Sign up for our newsletter
POPULAR AT PATHEOS Entertainment
1