Simon of Cyrene and his family, on film.

Like many other people, I’ve been doing a lot more binge-watching than usual lately, ever since the pandemic lockdowns went into effect.

I have particularly enjoyed spending time with the Criterion Channel. Among other things, they had a huge selection of Sidney Poitier films leaving at the end of April, and this inspired me to do a marathon of all of his films (and some of his TV shows).

Along the way, I revisited his cameo as Simon of Cyrene in The Greatest Story Ever Told (1965) — and I was startled to realize that this film has a detail that I never noticed before. Namely, it just might be the only film that depicts both of Simon’s sons.

Simon of Cyrene is mentioned in all three of the Synoptic gospels, which state that he was passing by when the soldiers who were about to execute Jesus forced him to carry the cross for Jesus, presumably because Jesus was too weak to carry it himself.

The three accounts are very similar, but Mark’s gospel is the only one which includes the detail that Simon was “the father of Alexander and Rufus” (Mark 15:21).

Who were Alexander and Rufus? Who knows. But tradition does associate Mark’s gospel with Rome — and with St Peter, who died in Rome — and Paul’s letter to the Romans includes a special greeting for “Rufus, chosen in the Lord, and his mother, who has been a mother to me, too” (Romans 16:13). Is that the same Rufus? I like to think so. It may be that Mark mentioned Simon’s sons because he knew his readers would recognize those names, whereas Matthew and Luke were writing for audiences that wouldn’t.

And hey: If Paul and Mark are talking about the same guy, then it would seem that Mrs. Simon of Cyrene was a close friend of Paul’s, which is interesting in its own right.

Anyway. I have noted in the past that at least one film does seem to acknowledge the bit about Simon’s sons — but the film I was aware of showed only one of his sons.

That film is Mel Gibson’s The Passion of the Christ (2004), which shows Simon walking with one of his sons before the soldiers force him to carry the cross against his will:

The Greatest Story Ever Told, on the other hand, seems to show Simon with both of his sons, as per the photo at the top of this post.

How did I miss this before? Possibly because, when Simon first appears in the film, he steps out from behind the crowd, and he is not clearly with anybody:

He then looks to the side, briefly, at a woman and two boys — and I honestly don’t know how I missed this. Maybe I looked away to write some notes down or something:

And then Simon walks over and picks up the cross voluntarily:

Anyway, if those two boys are Alexander and Rufus, then this is the only film I can think of that depicts both of Simon’s sons — and it seems to depict Simon’s wife, as well!

February 1, 2021 update: An earlier version of this post claimed that one of Simon’s sons is depicted in Cecil B. DeMille’s The King of Kings (1927), but I have since realized that the boy in question is actually Mark — the future author of the gospel that mentions Simon’s sons! Whoops. So I have removed that section from the post above. 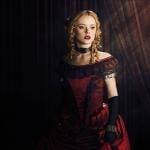 May 4, 2020
Redeeming Love, a retelling of Hosea, coming to theatres next year
Next Post

May 15, 2020 Danny Boyle to direct an even less-biblical version of Methuselah?
Recent Comments
0 | Leave a Comment
"Animation would uniquely allow the creator to show the genitalia without getting into the waters ..."
Kellen The naked Christ in film: birth, ..."
"Gentlepersons:While I am a lifelong Christ-follower and served as Chaplain to a graduate program in ..."
Darrell A. Harris Exclusive: Patrick and Paul Aiello on ..."
"I know this is from 5 years ago, but I just got around to seeing ..."
digital bookworm Exclusive: Watch the trailer for Becoming ..."
"Thanks so much for making this list. I was thinking of doing something similar, but ..."
Bill Kudrle The Chosen — season one scripture ..."
Browse Our Archives
Related posts from FilmChat