Watch: Jesus is reunited with Thomas in a clip from season two of The Chosen

Cameras are rolling on season two of The Chosen, and today we got to see a rough cut of a scene from episode one.

The scene in question shows Jesus meeting Thomas and Ramah in Samaria, twelve days after he first met them at the wedding in Cana (as per episode five of season one).

The two-minute clip — which also gives us our first glimpse of Abe Martell as Big James — was featured in an almost-two-hour livestream that went up on YouTube tonight.

The clip can be seen at the 83-minute mark in the video below:

Elsewhere in the livestream, writer-director Dallas Jenkins says the first part of season two will probably be online by Easter 2021, but in the meantime, he says there will be a two-hour Christmas-themed musical special on December 13, featuring music videos (by Mandisa, for King & Country, and others) that were shot on the show’s sets.

Along the way, Jenkins interviews his wife Amanda, who is writing some tie-in books, as well as actors Noah James (Andrew) and Elizabeth Tabish (Mary Magdalene).

As far as I know, the clip of Jesus meeting Thomas and Ramah is the only bit of actual footage from season two that has been released so far. However, in another livestream posted a few weeks ago, we watched from a distance as the filmmakers shot the scene in which Jesus meets the lame man by the Pool of Bethesda (as per John 5).

That peek behind the scenes begins around the 40-minute mark in this video:

Want to see even more of season two? Jenkins and some of the actors read some excerpts from the scripts in a handful of videos that were released over the summer.

Meanwhile, another recent behind-the-scenes video shows that the series hasn’t given up its flair for modernized, indeed anachronistic, dialogue.

Of course, first-century Jews didn’t measure fractions this way. Decimal fractions were first introduced in the Muslim world in the Middle Ages, and to this day different cultures disagree on whether to separate integers from fractions with a “point” (as in most English-speaking countries) or a comma (as in most other countries).

Anyway. Season two is now in production — and with that, The Chosen is now officially the first multi-season series about Jesus, as its makers always wanted it to be.

The image at the top of this post shows Thomas (Joey Vahedi) and Ramah (Yasmine Al-Bustami) in a scene from ‘The Wedding Gift’ (season one, episode five of The Chosen). 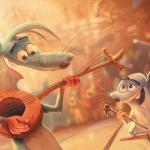