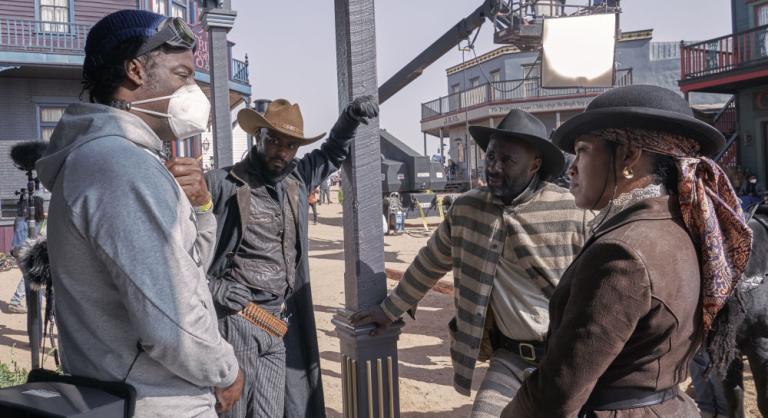 Jeymes Samuel made a splash last year with a Western called The Harder They Fall, which featured a cast of mostly black actors. Now Samuel and one of those actors, LaKeith Stanfield, are collaborating on a movie called The Book of Clarence, which will be set in Bible times.

Samuel spilled the news in an interview with Deadline, and the impression one might get from the article is that black actors haven’t been featured in Westerns or Bible films before — but of course, the truth is a little more complicated than that.

Just to cite the Western genre, I’ve written in the past about the Westerns that Sidney Poitier starred in — one of which, 1972’s Buck and the Preacher, was also his directorial debut — and the Criterion Channel hosted a series of ‘Black Westerns’ last year that also included films like 1960’s Sergeant Rutledge (directed by John Ford and starring Woody Strode), 1971’s Skin Game, 1974’s Thomasine and Bushrod, and 1993’s Posse.

In the case of Bible films, Samuel seems to imply that the only black person who has ever appeared in a Bible film is Carl Anderson’s Judas in 1973’s Jesus Christ Superstar:

We’ve never had Black people in the Bible days of cinema. There’s not even a template for us to go, “Well, like that movie?” We’d seen a Black cowboy before. We’ve never seen… Even when Andrew Lloyd Webber made something as nuanced as Jesus Christ Superstar, there’s no Black people in it, except Judas. Judas was the Black guy. “I’m going to betray you, Jesus.” What the hell? That’s what you’re giving us? That’s the Black guy?

Setting aside that Judas is, in some ways, the most sympathetic character in that musical — he gets the introductory song and the title song — there have been quite a few other black characters in Bible movies.

Because the stories are primarily focused on Jewish characters from the Middle East, the black characters in older movies have tended to be minor characters with an African connection, such as Simon of Cyrene (Sidney Poitier in 1965’s The Greatest Story Ever Told), the African magus Balthasar (James Earl Jones in 1977’s Jesus of Nazareth), or the Ethiopian eunuch baptized by Philip (Ben Vereen in 1985’s A.D. Anno Domini).

Sometimes the roles are more prominent, such as the Queen of Sheba played by Vivica A. Fox, whose romance with Solomon is a major part of 1997’s Solomon.

Films about Moses have sometimes acknowledged the tradition that one of his wives was Ethiopian (Numbers 12:1). The Jewish historian Josephus says this wife was an Ethiopian princess who fell in love with Moses when he was still an Egyptian prince, and the 1956 version of The Ten Commandments gives a nod to this tradition when an Ethiopian princess flirts with Moses in Pharaoh’s court. More subtly, 1998’s animated The Prince of Egypt makes Zipporah, the Midianite wife of Moses, darker-skinned than the Hebrew women — effectively conflating Moses’ two wives into one character — and while her voice is provided by Michelle Pfeiffer, her father is played by Danny Glover.

More recently, filmmakers have tended to portray the apostles and other followers of Jesus as a racially diverse bunch, with black actors playing Peter in 2018’s Mary Magdalene, James and John in 2015’s A.D. The Bible Continues, and Mary Magdalene in A.D. The Bible Continues and this month’s Magdala. (Honorary mention goes to 1999’s Dogma for casting Chris Rock as Rufus, “the thirteenth apostle”, who may or may not be one of Simon of Cyrene’s sons, à la Mark 15:21.) The current life-of-Jesus series The Chosen also features a fictitious Ethiopian follower of Jesus named Tamar, and the actor who has played Jesus’ adoptive father Joseph in three episodes so far is also black.

And that’s all before we get to films like 2006’s Color of the Cross that depict Jesus and his entire family as black, or films like 2006’s Son of Man, 2020’s Lamentations of Judas, or 2020’s The New Gospel, all of which depict African Jesuses allegorically.

Anyway, here is the relevant section of Samuel’s interview with Deadline:

SAMUEL: . . . So, my next movie is The Book of Clarence. And LaKeith Stanfield will play Clarence. And I’m taking it all the way back to the Bible era. You remember those biblical epics, whether they were about the Bible or just taking place around it, from The Ten Commandments to The Greatest Story Ever Told, Samson and Delilah and Ben-Hur, which runs alongside all that stuff in the Bible? As will be The Book of Clarence, a full fun-filled extravaganza. It’s written and ready to go, and set in 29 AD.

DEADLINE: Your first film came from a longtime love of Westerns, even though as you said, you did not see many Black faces in them. What sparked you to do a Biblical tale, where the movies you mentioned also lacked Black faces, from what I recall?

SAMUEL: This is exactly what excites me. Firstly, the Bible’s the biggest franchise in the world. The biggest superhero, the most famous superhero of all time is Jesus himself. But when I used to learn about those things when I was a kid, I used to say to myself, “Where did Jesus buy his sandals from? Did he walk around barefoot? Did he buy his clothes or did people just say, “Hey Jesus, wear this?” Was there a particular brand that he liked, or a particular tailor who made his shawl? Where did Mary Magdalene get her hair done? They didn’t have any hair salons since the Cleopatra days. What currency did they spend? All that stuff the Bible doesn’t speak of fascinates me about the era. The Bible just gives you bricks. But the mortar you’re meant to fill in yourself. I want to show who he bought them from and what that guy was doing. What the guy that sold him those sandals had for breakfast, for dinner. Who was in the hood? Who was the troublemaker, or the cool dude that the girls liked? Who was the kid with aspirations? Who was the nincompoop? That stuff is what fascinates me about that era. The Book of Clarence is all of that stuff. It’s a really awesome, awesome, awesome tale.

This sounds rather like Monty Python’s Life of Brian, which I think Eric Idle describes in one of the audio commentaries as a movie that focuses on the fact that, whenever Jesus performed a miracle, there were always other people who missed it because they were busy doing something really mundane like “Hoovering” (i.e. vacuuming).

Also, for what it’s worth, the Bible does talk about the currency that people used in Jesus’ day, most famously when Jesus is asked whether Jews should pay taxes to Caesar, and Jesus replies by asking his interlocutors to show him a denarius (Mark 12:13-17, Matthew 22:15-22, Luke 20:20-26). And as it happens, the second episode of The Chosen begins with Mary Magdalene visiting the first-century equivalent of a hair salon.

Here’s one more snippet from the interview:

SAMUEL: . . . People not understanding the viability of what happens if you put Black people in major roles. Quentin put one Black guy in cowboy clothes [in 2012’s Django Unchained] and had the biggest movie of his career. This is just something that, when you give people something they’ve never seen before and they’re not used to seeing, there’s a huge appetite for it. So, take Black people in the Bible days. As my mother said, “The difference between The Harder They Fall, Jeymes, and The Book of Clarence is, I’ve been waiting for The Harder They Fall for my whole life. But The Book of Clarence? That’s the one I’ve really been waiting for my whole life.’ So, my mother’s been waiting her whole life and her mother’s been waiting for her whole life. Like everyone in the Bible.

— The picture above shows Jeymes Samuel, LaKeith Stanfield, Idris Elba, and Regina King on the set of The Harder They Fall.

May 12, 2022
The Omen gets a prequel and Left Behind gets a sequel (or re-reboot)
Next Post

May 20, 2022 Glimpse the Queen of Sheba in the trailer for Three Thousand Years of Longing
Recent Comments
0 | Leave a Comment
Browse Our Archives
Related posts from FilmChat