An Intrusion of Roaches and a Disco of Saints

An Intrusion of Roaches and a Disco of Saints January 18, 2021 Thumper Forge

I had about eleventy-thousand things I needed to take care of before writing this post, but I came home from work to find a cockroach the size of a carburetor skittering around my front door. So instead, I dropped everything (literally: I am terrified of roaches and may or may not have shrieked a little when I saw him) and ran to the grocery store to pick up offerings for a legendary folk saint.

Page 00027 of the Principia Discordia features a drawing of a cockroach with a handwritten caption: “This is St. Gulik. He is the Messenger of the Goddess. A different age from ours called him Hermes. Many people called him by many names. He is a Roach.” His full title is St. Gulik the Stoned, and the fact that he’s a roach is a terrible, terrible pun: As it also says in the Principia, “There is historic disagreement concerning whether [the Apple of Discord] was of metallic gold or Acapulco.” But the punny nature of his existence connects him to another Hermetic incarnation — St. Expedite, the patron saint of procrastinators. Expedite is usually depicted holding a cross emblazoned with the word Hodie (Latin for “Today”) and stepping on a crow, who in turn is squawking Cras (Latin for both “The Noise That Crows Make When Stepped On” and “Tomorrow”). The lesson, then, is that Expedite helps up get things done immediately instead of putting them off any longer.

Traditional gifts to St. Expedite include fresh flowers, pound cake, and praising his name in print. However, in lieu of taking out a newspaper ad, and before we get back to the unsettling subject roaches, I thought I’d tell you the tale of how we met.

There’s a Catholic bookstore not too far from my apartment, where I have spent many a lunch break leisurely browsing and avoiding eye contact with the very friendly, very Christian employees who would probably not be entirely thrilled to know what I end up doing with my purchases. I’d gone in one afternoon to look at patron saint statues — I’d recently gotten obsessed with the Fourteen Holy Helpers and was trying to, like, collect the whole set — when I noticed a large, plaster statue of a Roman soldier with a crow under his foot.

I was surprised to find Expedite nestled among the Apostles and Baby Jesuses (Jesi?), since he’s one of those not-quite-kosher saints that the Vatican would rather prefer the God-fearing people stop venerating. Curious, I lifted him off the shelf to see how much he cost: According to the price tag, he was both affordable and “S.O.”

I thought about that for a second, then rushed to the counter, waving my debit card aggressively.

According to legend, a church in New Orleans once commissioned an artist in Spain to produce a statue of the Virgin Mary. However, on the day of delivery, two crates arrived instead of one. The first contained the statue of the Mary; the second, stamped “Expedite,” held a statue of a Roman soldier, and it was decided that Expedite must be the soldier’s name.

And there I was, holding a statue of Expedite that had shown up unexpectedly in the mail, waiting for someone to come along and recognize him.

I’ve been giving him flowers and pound cake ever since, and I only miss deadlines when I forget to pray to him first. Granted, I usually don’t think to pray to him until the deadlines are ready to eat my soul, but I keep his statue dusted, and I always come through on the offerings I promise him, so it evens out sooner than later.

Okay, that’s Expedite. But how do we acknowledge St. Gulik?

According to the Church of Hyperdiscordia, St. Gulik is not just one roach, but all roaches. If you see more than one — say, if you turn on your kitchen light in the middle of the night and three roaches scatter — it’s really just St. Gulik moving so quickly, that it only appears as if there are multiple roaches. This is reassuring to those of us who suffer from katsaridaphobia, as is the proper way of recognizing his presence: Gulik brings messages from Eris, so just as Expedite steps on a crow to get his point across, stepping on, squashing, or otherwise annihilating a cockroach let’s Eris know that her message was received.

Or, if you’re averse to taking life, you could use my preferred method of screaming and running away (which, when you think about it, is honestly the more Discordian approach).

Are Gulik and Expedite really the same?

While I normally don’t ascribe to the “All Gods Are One God” worldview, in this situation, I’m going to hazard a guess and say yes. Hermes is a trickster, after all, popping up when we least expect him, so it resonates that he would manifest as both a magical saint who specializes in double entendres, and an insect that refuses eradication. Plus it’s hard to overlook a giant cockroach unseasonally flinging itself into my path on the same day that St. Expedite granted my latest petition.

I didn’t kill it, by the way: I let the avatar of Gulik live with the understanding that it wouldn’t get into the pound cake I left out for Expedite. But if I wake up tomorrow with my altar covered in roaches, I will pull out an industrial-sized can of bug spray and make everyone aware that their DMs are coming through loud and clear.

January 17, 2021
Eris is Burning (or, a Discordian Crash Course in Crashing a Wedding)
Next Post 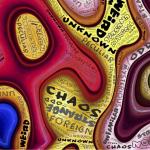 January 21, 2021 Chaotically Yours
Recent Comments
0 | Leave a Comment
Browse Our Archives
get the latest from
Fivefold Law
Sign up for our newsletter
POPULAR AT PATHEOS Pagan
1

No, That's Not An Odal Rune
The Zen Pagan
Related posts from Fivefold Law 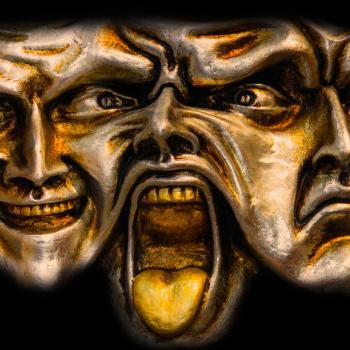 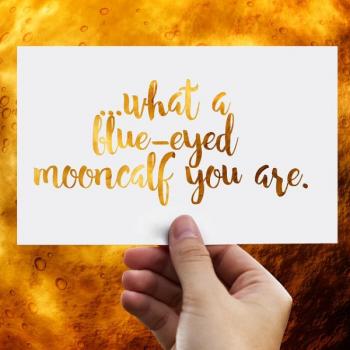 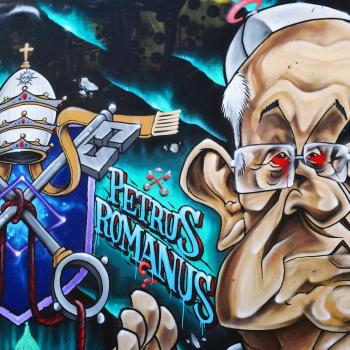 Pagan
On Pagan Elders and the Popes We Made...
Fivefold Law
TRENDING AT PATHEOS Pagan

Shining the Light and Working Magic for Good
The Odal rune on the CPAC stage may not have been intentional,...
view all Pagan blogs
What Are Your Thoughts?leave a comment