A couple of months ago, I wrote a post about open and closed cultures. Since then, I’ve learned that the following items (among others) are currently being billed as “closed practices”:

You read that last bullet point correctly. We have officially taken this shit too far, y’all.

According to my Etsy messages, buying my oils may indeed be a closed practice.

Cross went on to explain that he’s had customers of his Etsy shop cancel orders, because “they needed to do ‘more research’ about what they were allowed to use.” Okay. I appreciate that these customers are trying to be respectful and not step on anyone’s cultural toes, but in doing so, they’re denying Cross their patronage. It’s basically, “We’re demonstrating how much we support you by refusing to support you,” which, y’know, Does Not Compute.

So before we do anything else, let’s hammer it down.

Cultural appropriation occurs when a minority practice is adopted by the members of a majority, who then a) deny the minority access to that practice, or b) condemn the minority for continuing to engage in the practice. It looks pretty cut-and-dry on paper, but it’s a bit more difficult to tag in the wild.

In order that we may better get our heads around it, I’ve come up with some handy scenarios, mostly based on things I’ve experienced or witnessed in person. Switch out the hypothetical tradition I mention below with Hoodoo, say, or Pow-Wow, and you’ll start to notice some patterns in Real World Paganism.

I buy a book on Sokovian Witchcraft. I find a few spells that I like and incorporate them into my personal practice.

Is this cultural appropriation? No. All I’ve done is buy a book and learn some stuff. Casting these spells on my own does not harm the culture from whence they originated.

That said, the one thing I want to make sure of is not thinking in terms of “taking” from Sokovian Witchcraft. I may be tying some Sokovian concepts into my own work, but that doesn’t mean they now belong to me — I need to remain very aware of that as I move forward.

I buy a book on Sokovian Witchcraft. I find the subject so interesting, that I buy a few more books. At some point, I learn that Sokovian folk magic is heavily influenced by Sokovian Orthodox Christianity and that the majority of Sokovian Witches are Christian. I have problems reconciling this with my Pagan beliefs, but I find a lot of cool secular spells in the books, so I keep working with those. A friend returns from a European vacation and brings me back a souvenir canister of Sokovian incense, which I occasionally use in private rituals.

Is this cultural appropriation? No. I may not agree with certain aspects of Sokovian Witchcraft, but I am not attempting to erase those aspects from the culture as a whole, nor am I demanding that the culture itself change to suit my comfort level. There is also no harm in using the incense, especially when we consider that the money spent on it contributed to the Sokovian economy.

I buy a book on Sokovian Witchcraft. I find the subject so interesting, that I buy a bunch of Genuine Sokovian Scarlet Luck crystals and a Sokovian Oracle deck at my neighborhood New Age shop so that I can offer “traditional” readings and magical services through my website. I have problems reconciling Sovokian Orthodox Christianity with my Pagan beliefs, so I just ignore it, except for the Sokovian Virgin Mary (Sveta Wanda), whom I rationalize as an incarnation of the Great Mother Goddess. I refer to myself as a Sokovian Witch, but I get into a lot of online arguments with long-time practitioners who maintain that Sokovian Witchcraft isn’t a Pagan Tradition.

Is this cultural appropriation? Yes. I am actively attempting to adopt and profit off a cultural identity and modify its practices instead of working within its paradigm, and I am doing so in spite of the information being presented to me by actual members of the culture. I also probably didn’t take the time to look into whether or not the crystals I purchased were ethically sourced (or even from Sokovia).

I buy a book on Sokovian Witchcraft. I find the subject so interesting, that I get baptized and start attending services at St. Maximoff’s Orthodox Church, and I eventually go back to college to earn a Ph.D. in Sokovian Studies. After graduation, I move to rural Sokovia, spend several months learning the local dialect, and apprentice to a village Witch. Years later, I return to the States and write a book on my personal experiences with Sokovian Witchcraft.

Is this cultural appropriation? No. I have immersed myself in the culture respectfully, and I have been accepted into it. Anything I publish about the culture comes from my own perspective within it, and I am not claiming to speak for other practitioners or the rest of the culture.

I don’t buy any books on Sokovian Witchcraft, because it’s a closed practice. My neighborhood New Age shop carries Sokovian crystals and oracle decks, so I encourage folks not to shop there. A friend returns from vacation and brings me back a souvenir canister of Sokovian incense; I post in a Facebook group to ask if any indigenous Sokovian Witches can tell me how to properly dispose of it. I strongly disagree with the Sokovians in the group who say it’s okay for me to use the incense, and I encourage them to process their internalized sokoviphobia.

Is it cultural appropriation? Actually, yeah, it really is. It’s an attempt to wrest control of a practice away from a given culture, under the assumption that I know more about preserving and protecting their heritage than they do.

There’s also some pretty heinous virtue signaling going on here: Instead of just quietly donating the incense to the Sokovian Embassy or something, I’m making a big honking deal about how I realize it’s wrong for me to have it, so that the Sokovians in the group will be like, “Wow, this guy is such an ally!” Thing is, if I really were an ally, I wouldn’t feel the need to broadcast what an amazing ally I am. I’d do the damn work, because it’s the right thing to do, not because I want to be praised for it.

In The Independent last week, Alex Miller wrote a must-read article about cancel culture, and one particular paragraph really jumped out and smacked me around a little:

The thing with canceling is that it makes white people feel like they’re doing something useful. But the Black community never asked people to destroy or defund or edit media output which has graced our televisions and our movie theaters and libraries for decades. That isn’t the root cause of discrimination against us. Often, it feels like the (usually white) powers-that-be preempt some sort of angry backlash from my community and act accordingly. Don’t do that. We’ll let society know, en masse, what really pisses us off.

Let us please take Miller’s words to heart and stop preempting angry “closed practice” backlashes. And, even more crucially, let us please, please do what we can to amplify the voices of marginalized cultures without deigning to speak for them.

Is this cultural appropriation? Yup. And I’m going to hell for it. 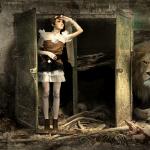 May 29, 2021 Looking for Signs in All the Wrong Places
Recent Comments
12 Comments | Leave a Comment
Browse Our Archives
Related posts from Fivefold Law

12 responses to “Cancelled for Renovations: More Thoughts on Closed Practices”