“What does it mean to be Pagan?”

It’s a question we’ve probably all asked ourselves at some point, but in this case, the person inquiring was a very conservative, aggressively Christian co-worker who’d once reported her neighbors to the Department of Homeland Security, because she thought she’d seen a “terrorist symbol” in their apartment. (It turned out to be the Moroccan flag.)

I don’t even know how she knew I was Pagan, but regardless, I felt it was best to tread carefully.

“Well,” I said, trying to come up with an answer that wouldn’t result in me getting drowned in the breakroom sink to see if I floated. “Christians view God as a Father, and Pagans view God as a Mother and Father.”

My co-worker thought about that for a second, then said, “Oh. Okay. Thanks!”

And that was that. And I really didn’t think much about it afterward, until I was hanging out in an online forum a few months later, and someone asked how they might go about explaining Paganism to Christian friends and family.

Ooh! I know this one, I thought. And I shared the story above, then waited for what I assumed was going to be a comparable response: “Oh. Okay. Thanks!”

Y’all. People got so mad at me.

“HOW DARE YOU PRESUME TO SPEAK FOR ALL OF US?!” one guy roared, while others dutifully listed off all the Pagan traditions that didn’t fall under my rendering and accused me of being a tool of the hegemony. One girl just gleefully went off on me, calling me every name she could think of, and when I’d finally had enough and fought back, she pulled a 180 and was like, “Why are you being so mean to me?! My dog just died, you monster.”

I swear to the Gods I didn’t know about her dog. But everyone else was immediately all, “MONSTER!! Why are you such a horrible monster?!” so I just unsubscribed and went to take a shower.

I bring up this particular tale, because I’ve been seeing a lot of, like, internalized anti-Pagan sentiments lately, from people who are determined to reject any concrete definition of Paganism, but who also want to complain that Paganism is so all-encompassing, that it can’t be defined at all. For example, I was recently sort of halfway paying attention to a social media discussion on this topic, when I saw the following comment appear:

Between the “do whatever you feel like” and the reconstructionists, I’m about done with the lot of pagans. This whole thing used to be fun, and now it’s ruined.

Personally, I don’t think any person or persons can “ruin” Paganism for the rest of us. And I also have never found it very difficult to define: For me (and this is only my definition, y’all — I promise I’m not trying to force anyone else to accept it), Paganism is a collective term for modern-day belief systems with roots in the folklore and pre-Christian religions of Europe and the Mediterranean. I don’t think it has to be any more complicated than that.

But I also understand the frustration of trying to get a whole bunch of different religious practices to mesh under one cohesive umbrella without anyone getting shoved into the rain. And I also know what it’s like to have labels slapped on me from the outside, regardless of whether or not they are compatible with my nature.

So today, and in the spirit of both inclusivity and healthy gatekeeping, I thought we’d look at the history of the modern use of the word “Pagan,” and see if we can’t all at least kind of agree on a somewhat satisfactory definition.

What could possibly go wrong with that?

(To quote Lloyd Bridges in Airplane!, “I picked the wrong week to quit drinking.”)

In the context of contemporary religion, the word “Pagan” first appeared in print (at least in the US) in 1966, in the newsletter of the spiritual commune Kerista, written by none other than [fnordroll] Kerry Thornley, who would go on to become Lord Omar Khayyam Ravenhurst, co-founder of Discordianism. In this article (using the pen name Young Omar), he wrote:

Let us forget [Abrahamic religions]. Instead, let us look at the jobs of the far less intellectual, but far more constructively functional religions of old. These were the “pagan” religions—the religions that survive to this day in England and the United States as “witchcraft.”

Omar’s definition rolled with the idea that the Gods of one religion become the Devils of the next, although it limited Paganism to British Witchcraft and its American evolutionary branches. When I first started exploring Witchcraft way back in the day, that was the formalization I encountered: “Witch” and “Pagan” were pretty much interchangeable, and I don’t think I ever met a Pagan at the time who wasn’t actively engaged in Witchcraft under the auspices of the “Old Religion.”

So yeah, overall, it’s not that bad of a definition. But it’s also not inclusive by today’s standards. Let’s keep moving forward, then, and see what else we find.

In her magnum opus Drawing Down the Moon, Margot Adler states that Oberon Zell read Omar’s article in 1967 and ran with the idea, popularizing the term “Neo-Pagan” in the pages of Green Egg, the official publication of the Church of All Worlds. Not long thereafter (I want to say in the late 70s/early 80s, but feel free to correct me), Isaac Bonewits expounded on the Neo-Pagan concept, defining it thusly:

“Neopaganism” or “Neo-Paganism” is a general term for a variety of movements both organized and (usually) nonorganized, started since 1960 c.e. or so (though they had literary roots going back to the mid-1800s), as attempts to recreate, revive or continue what their founders thought were the best aspects of the Paleopagan ways of their ancestors (or predecessors), blended with modern humanistic, pluralist and inclusionary ideals, while consciously striving to eliminate as much as possible of the traditional Western monotheism, dualism, and puritanism.

So this is a much more inclusive definition. Possibly even a wee bit too inclusive. Truth be told, I’m a little hesitant about the whole “Paleopagan” notion.

According to Bonewits, Paleopaganism is “a general term for the original polytheistic, nature-centered faiths of tribal Europe, Africa, Asia, the Americas, Oceania and Australia, when they were (or in some rare cases, still are) practiced as intact belief systems.” He also included Hinduism, Shinto, and Taoism under the Paleopagan banner. But the thing is… I feel like practitioners of religions that pre-date the Neo-Pagan movement should be the ones to decide whether or not any kind of Pagan descriptor applies to them.

Like, if I meet someone who’s Hindu, and they call themself Pagan, I’m not going to disagree with them. But I’m also not going to say, “Well, that means that Hinduism is Pagan,” because… it’s just not. It’s Hinduism. And things get real ugly real quick when we decide that everything not nailed to a cross is Pagan, and therefore ours for the exploitation.

But this does bring up a tricky sticking point: What do we do about Pagans who don’t identify as Pagan?

I’ll never be able to find it again, but I once read this absolutely fascinating article about an anthropology student who was writing her dissertation on the survival of pre-Christian religion in Malta. She interviewed a number of modern Maltese practitioners, and every conversation went something like this:

“So, on the Summer Solstice, you all gather in this ancient stone circle.”

“And you give offerings to the Sun.”

“And then you dance naked around a Goddess statue.”

“You literally just ate a baby.”

For many of us, gathering in a stone circle and pouring offerings to the Gods would be, like, the Paganest of Pagan activities, so it’s almost vertigo-inducing to hear of people doing these things and calling themselves anything other than Pagan. But a lot of folk practices survived by assimilating into the Church, and we don’t get to choose the labels for the people whose cultures and families handed those practices down to them.

We’re also seeing a rise in Folkloric Witchcraft at the moment, which means there’s going to be a growing contingent of magical practitioners who may or may not decide to call themselves Pagan. More than likely, many of those practitioners will stay with the religions in which they were raised.

And you know what? There’s nothing wrong with that. The gist here is that if we want people who have planted themselves firmly outside the borders of Paganism to be our allies and respect our beliefs and practices, we have to respect theirs… and that includes respecting their identities, even when we really, really wish they’d adopt ours instead.

We can also approach this from a 12-Step angle. Recovery works on the premise of attraction over promotion. We don’t actively advertise or try to recruit anyone: We just make our presence known, so that anyone who needs us can find us. And we definitely don’t call anyone an addict or alcoholic unless they specifically call themselves that first. (Which, incidentally, is part of why we do that “Hi, I’m Thumper, and I’m an alcoholic” thing before sharing in meetings.) And perhaps that’s something we can keep in mind as we put ourselves out into the world as Pagans looking for kindred spirits. It’s like, “Hey there, we’re Pagan, and we’ve got nametags and coffee: Let us know if you’re Pagan, too.”

I mean, it could work. Everyone likes nametags.

So now, the big question: Did any of this help with solidifying a definition of Paganism? Probably not, even if I do still prefer my own take on it. But maybe Paganism isn’t really something that can be fully defined in words: Maybe it’s all in the actions instead of the explanations.

Maybe, the next time someone asks me what it means to be Pagan, I’ll just smile and do a good deed for them. And if they nod and say, “Oh. Okay. Thanks!” that’s pretty much the best definition there is. 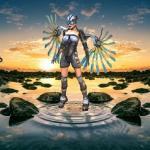 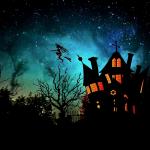 August 27, 2021 The Deathly Call of Witchcraft (Or, Keats and Yeats Are on Your Side)
Recent Comments
3 Comments | Leave a Comment
Browse Our Archives
Related posts from Fivefold Law

3 responses to “Sisyphus Shrugged: A Stab at Defining Paganism”