I got my left ear pierced during my junior year of high school. This was followed by another piercing in the left lobe and a third up in the cartilage, and eventually a piercing in my right ear to balance things out.

I know this is nothing by today’s standards, but back in the 90s, I was freaking edgy.

While I’ve always appreciated being able to accessorize my ears, I stopped wearing earrings about five years ago — officially because of corporate dress codes, but really because I took them out for work one day and then just forgot to put them back in. And also because I lost the little hinged hoops that were kind of my signature look.

Ben’s ears are gauged, so I mainly just admire his instead of messing with mine. He’s got a few other nuts and bolts around his self as well, and this past Friday, after he returned to Los Angeles, he collected an additional one. (Please accept the vagueness of that statement as permission to decide for yourself where the needle went.) I myself have never had anything below the neck bejeweled, but I support Ben 100% in his body art endeavors — although I did get a little concerned this morning, when one of the neglected, semi-closed piercings in my left ear developed an infection out of nowhere.

It wasn’t a big deal, and it was easily treatable, but it also wasn’t my piercing I was worried about. So I texted Ben like, “Hello! Be extra careful with your new skin hole today, because one of mine is all puffy, and it feels like a sympathetic reaction.” And he wrote back, “Thank you, I will take special care,” because he gets me, and because he’s used to me saying shit like this.

Ben calls it my Spidey Sense, although it is decidedly not a superpower, nor is it particularly useful. It’s just that every once in awhile, a random thought or feeling will pop into my brain, and I’ll be like, “Broom fell; company’s coming,” and then the doorbell rings, and everyone around me goes, “Whoa, wait, how did you know that would happen?” But I usually try to keep those thoughts to myself, because sharing them out loud is nine-out-of-ten times more trouble than it’s worth.

In college, I had a reputation as a seer, on account of I’d unintentionally but accurately foretold a couple of happenstances: Among a certain group of friends, I was just kind of known as the resident mutant. But then one of my friends was like, “I’m pregnant. Did you know?” And I was like, “Congrats! I did not in fact know,” and suddenly, the people who’d been weirdly braggy about my alleged abilities were all, “Hah! He didn’t know. He’s not psychic after all, the big fraud,” rendering all of the other pregnancies I’d successfully predicted moot.

But that’s just the Way of the Witch, isn’t it? When things are going well, everyone’s like, “Thumper is blessed with a gift!” And when things go south, it’s all, “Thumper sent his infernal spirit to jump on Goody Parson’s cow.”

Eh. Whatever. I was bound to get burned at the stake sooner or later.

What sucks is when I’m angry and not watching what I’m saying, because occasionally, some haphazard prophetic pronouncement will fly out of my mouth without me realizing it. This is when things get messy.

My ex had a mild head cold one time, which, on the Man Flu scale, rated somewhere between Last Rites and the reading of the will. I was getting ready to do a solitary Full Moon ritual, and he asked what the purpose was, and I was like, Oh, I’m just going to venerate the Moon Goddess.” And he was like, “But I’m sick. Can’t you do work for me instead?”

I conceded that it couldn’t hurt, and an hour or so later, I came back to the living room and was like, “I did some work to help you feel better.” And the rat bastard rolled his eyes and said, “You know I don’t believe in that shit.”

“You’re going to get a surprise on your blood test,” I barked. “Not the first one. The second one.”

“What the hell is that supposed to mean?” He asked.

I had no idea what the hell it meant, so I just shrugged.

He did need to get some routine bloodwork done a few days later, and he was quite horrified when he received his results, which were basically, “Your veins are full of angry ghosts and moldavite.” But then the lab called him back and was like, “Our bad! There was a problem with our equipment, but we reran your sample, and everything’s fine. You are absolutely not dying. Sorry about that.”

He stared at me for a bit, then shook it off and reiterated that he didn’t believe in such things.

It would be pretty epic if I could pull factoids out of the Akashic Records at will, but like I said, it doesn’t happen on a regular basis, and I don’t have any say as to when it will happen. So I’ve just kind of learned to live with it. And I do that by taking my own advice and asking myself those three important questions whenever an unknowable something or other Houdinis into my head:

I mean, if it’s a blood-red vision of the apocalypse, then yeah, I guess I should probably tell somebody. But if it’s just, like, “The cashier at Walgreens will see a green truck tomorrow,” or something equally inane, it doesn’t do any harm to keep silent.

I also work hard to remember that the future is spongy at best — there are possibilities and probabilities, but none of them are immutable. So anything I might see or say is just a potential future, not one that will undeniably come to pass, and as such, I’m not required to mention any of it to anyone. And this in turn helps me with my anger management issues, because I’m a lot less likely to go all Delphic Hulk if I stop, take a breath, and think before I speak.

But I’m still going to reach out to the people I care about if I get an ominous blip on my radar about them. Ben’s new piercing is fine (and my old one’s back to normal), and maybe I’m just a long-distance hypochondriac, or maybe he got my text and was inspired to give his bits a good washing mere seconds before some flesh-eating bacteria could slither into the wound. There’s no real way to tell, and it really doesn’t matter. Sometimes, it’s just nice to know that one person will always be willing to believe me.

Actually, make that two people. I was idly messaging with my Minoan/IML brother Jody as I was trying to finish this post (it’s not procrastination if I can pass it off as multitasking), and I took a screenshot of the conversation, because his timing could not have been better, y’all: 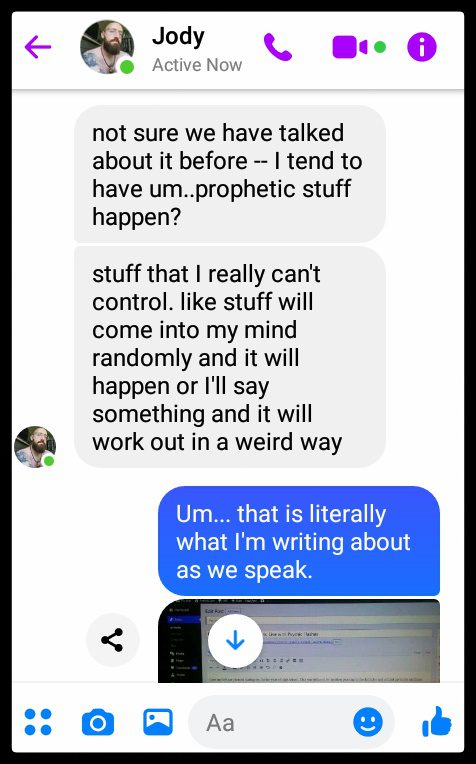 Jody is coming down for a visit sometime this Spring. I am very excited to see if we turn into a psionic version of the Wonder Twins, or if being in the same room cancels our powers out.

Either way, he says we’re going to have an adventure. Since he chose to reveal his own precognitive experiences when he did, I truly have no choice but to believe him.

January 25, 2022
A Tale That Begins with a Beet Will End with the Devil
Next Post 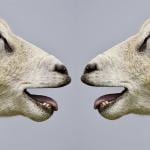 February 3, 2022 Imbolc Combed Over: The God of Wool and the Patron of Throats
Browse Our Archives
Related posts from Fivefold Law

Celebrate our blessings and then take a stand
What a month… June had its ups and it had its downs...
view all Pagan blogs
Copyright 2008-2021, Patheos. All rights reserved.
Close Ad