If You Can’t Steal Your Own Craft, Store-Bought Is Fine.

On their Facebook page, Morgan Daimler recently posted the following, which I’m reprinting with their permission.

Something I’m being asked more and more at my friend’s store: “Is it true a real (witch/pagan) has to steal their tarot/athame/crystals/etc?”

No. The answer is no. Please do not steal your magical supplies, especially from small shops, because someone told you a deck/tool/crystal will only work for you if you stole it. Absolutely not.

Okay. I have questions.

The upside here is that people are asking whether or not they should steal things instead of just straight-up stealing. So that’s a good sign. But how are they getting this in their heads in the first place? Who out there is selling the idea that theft is a necessary component of Witchcraft?

While nothing would make me happier than to blame the whole thing on WitchTok, I think there are more likely explanations. Some kids may be watching that scene in The Craft where Bonnie tries to get Sarah to shoplift (“Everything in nature steals, you know; big animals steal from little ones,”) and taking it as gospel. Others might be trying to rationalize insecurities, since “I have to steal it, because Power,” sounds Witchier than, “I don’t have enough allowance to pay for it,” or “I’m worried that the cashier at Barnes & Noble will judge me if I try to buy it.”

But I also think people might be misinterpreting old Craft concepts without any knowledge of how and why those concepts originated, the biggest one being “No Money For Magic.” So let’s try to break that down a bit and see what we find.

Back in the early aughts, there were always kerfuffles on the listservs about paying for magical training. Like, someone would announce an eclectic Wicca 101 course that would cost, say, $100 per person, and people would flip out. “WICCA DOESN’T COST MONEY,” they’d type furiously, not realizing that a) the no-money thing really only applies to British Traditional Wicca, and b) there are specific reasons why Trad Wiccans don’t charge for apprenticeship and initiation.

The first reason is fairly obvious. BTW training is about integrating students into an extended family and helping them find where they belong — bringing financial transactions into the equation changes the relationship and makes one’s motives questionable. Am I training and initiating someone under the auspices of Perfect Love and Perfect Trust, or because those pesky credit card bills aren’t going to pay themselves? Am I working to ensure that my Tradition survives, or am I looking for a non-taxable income? Within the Gardnerian trad, my reasons for initiating someone need to remain undiluted, and money murks all of that up.

And let me add a disclaimer here: This is just the Gard way of doing it. If members of traditions outside of BTW choose to charge for training — if Z. or the Sense Fairy or Grand High Lord StarDragon wants to slap a price tag on what they have to offer — that is none of my business. I mean, buyer be-freakin’-ware, but that’s the extent of the opinion I’m allowed to have on the matter.

The other reason why BTW doesn’t cost money involves some interesting legal history. Back in 1951, England repealed the Witchcraft Act of 1735 and replaced it with the Fraudulent Mediums Act, which made the practice of Witchcraft legal but prohibited anyone claiming to have psychic or spiritual abilities to charge for their services, unless they were doing so for entertainment purposes.

So basically, you could offer Tarot readings for money, with the understanding that it was just a fun diversion for your clientele — but if someone hired you to remove a curse and then decided your efforts weren’t worth the cost, you had better be prepared to prove your abilities in a court of law or face prosecution. (As a side note, the Fraudulent Mediums Act itself was repealed in 2008 and replaced with the Consumer Protection from Unfair Trading Regulations.)

Gerald Gardner started publicly identifying as a Witch after the Witchcraft Act was repealed, and he never charged for training or initiation into his practice. From a legal perspective, he couldn’t — if cash exchanged hands, and a new initiate decided that they’d been sold a bill of goods, Gardner could’ve been arrested under the Fraudulent Mediums Act for attempting to make money through deception.

Today, we don’t charge for initiation entirely because of the first reason I discussed above. But not getting sued by grumpy ex-students out for vengeance is definitely a fringe benefit.

I don’t have any proof, but I suspect that a lot of the things said about money being anathema in Greater Pagandom come out of BTW not costing anything. I’ve been told that one’s athame should be a gift; that one’s ritual cup should be a gift; that one’s first Tarot deck should be a gift; and those are lovely thoughts, but purchasing any of these things for yourself will never be any kind of deal-breaker. The ritual cup I use most often was (very thoughtfully) gifted to me, but I’ve got others that I bought on my own, and the ground isn’t going to crack open beneath me if I drink out of one of them instead. I found my athame at an Army surplus store, and I didn’t have to scrub the stench of retail off of it before using it.

I did have to sand the handle and stain it black, but that was just par for the traditional course. And I did so without accidentally burning my house down. Considering how often I walk into telephone poles, no one was more surprised than I was at the success of that project.

I’ve also heard over and over that you’re not supposed to haggle over the price of your athame, which… okay, I kind of endorse this, even if I don’t know where that particular guideline came from. But it makes sense — the athame is an extension of the Witch’s will, and that’s not something you ever want to devalue. Plus, saving up for a pricey but perfect knife is imposing discipline over will, which is something an effective Witch often finds themselves having to do.

I do understand the romanticism of the “must be gifted” ideal, but I also think it’s contributing to the idea that stealing ritual tools is okay. Picture some teenager in a bumpluck, square-state town who doesn’t know any Witches in real life but keeps reading online that magical supplies must not be purchased: If they don’t have anyone to give them a knife or a deck of cards, they could realistically assume that theft is their only option. And that’s a truly unfortunate precedent to set.

Long story short, don’t steal stuff, pumpkins, and don’t encourage others to steal. Support your local occult shops and bookstores; or, if there’s not one in your area, see what you can buy directly through artists’ and creators’ websites, or through Bookshop Dot Org. And if you can’t do any of the above, see what’s available in your immediate environment and go from there.

As my favorite Witch Tempest once said, “Everyday Witchcraft is sourced from what is at our fingertips.” These are excellent words to live and practice by. Just, y’know, make sure those fingers aren’t sticky. 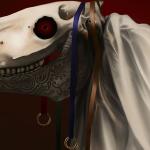 December 21, 2021
In Which I Literally Beat a Dead Horse: A Yuletide Yarn
Next Post 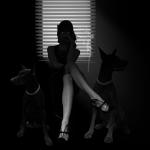 December 31, 2021 The Goddess of Getting Away With It
Browse Our Archives
Related posts from Fivefold Law