Read to Sludge: Divination, Auto Repair, and Honesty Over Temptation

I am not ashamed to admit that I have a crush on my mechanic, Sayyid. Or at least I would have a crush on him, if he wouldn’t yell at me every time my car falls apart. It’s like a crush artisanally blended with a healthy dose of respectful terror.

About a month ago, my car (the indomitable Pukwudgie) had some kind of seizure. I was at a stoplight, bobbing my head to whatever pop song was playing on the radio, when Pukwudgie suddenly started shuddering, and his “check engine” light started flashing accusingly at me.

I was only a mile or so from home, so I pressed forward, gently rubbing his dashboard and murmuring, “You can do it, we’re almost there, you’re a very good boy,” until we safely arrived at my apartment. And then I reached out to Sayyid to let him know we’d be dropping by for a visit in the morning.

As moderately afraid as I am of Sayyid’s wrath, I will say that he’s an excellent mechanic with unswayable ethics. The first time I brought Pukwudgie in, because he was making an odd noise, Sayyid was like, “Brake pads are bald! Bearings are corroded! Belts require holy water!” and charged me $1800. Six months later, when Pukwudgie had to be towed in because his entire electrical system had apparently died, Sayyid was like, “You needed a new wire, so I replaced it. No charge. Why would I charge you for a wire? Get out of here.”

I was hoping for another wire situation, but alas, Sayyid was even angrier at me than usual.

“Your car is very bad,” he bellowed, when I called for an update. “Very bad! There is sludge! Sludge everywhere! And now your car has had a heart attack.”

Sayyid went on to describe how the sludge had clogged up a valve and caused the shuddering episode, in the same way a clogged artery can induce myocardial infarction. But if anything, it was nice to know I wasn’t the only one anthropomorphizing the vehicle.

“Mr. Forge, I told you a year ago about the sludge,” he barked. “I told you two years ago!”

“Okay,” I said. “You did in fact warn me about the sludge. But you also took every dollar I had to fix the brake pads and bearings and belts. I couldn’t afford to deal with the sludge.”

“This is true,” Sayyid acknowledged.

“So what’s the damage going to be this time?”

“Eh. Diagnostics and and two oil changes to flush out the engine. $200. Your car will be fine. Bring it back in a few weeks for one more oil change.”

I was concerned about the mood swing but relieved that the repairs were affordable. And I was even more relieved that Pukwudgie had stopped shuddering and seemed to be driving fine. Right up until this past Saturday, when I pulled out of my apartment complex to head to work, and Pukwudgie stalled out in the middle of the street.

I managed to coast into a driveway, and Pukwudgie started up again without issue. But I wasn’t going to take any chances, so I drove (very slowly and carefully) back to Sayyid’s and Ubered to the store.

A friend (who doesn’t get a fun pseudonym, because I know he’d prefer to remain completely anonymous) happened to call as I was getting ready to open, and his innocuous “Hiya, how’s it going?” cracked open the floodgates. I told him everything that was going on with the car, and how I wouldn’t get a verdict on Pukwudgie’s chances of survival until after the weekend.

“How much are the repairs going to cost?” he asked.

“Will you be able to cover it?”

While extremely grateful for his generosity, I strongly encouraged him to hold off until after we knew how much it was actually going to be — I didn’t want him to commit and then have to put a kidney on eBay.

But he assured me it would be fine, and he made me promise to keep him posted. In the meantime, Chase graciously carted me around for a couple of days, so that I wouldn’t have to sell off any of my own sweetbreads to keep booking rideshares.

“It may stall,” Sayyid said. “There’s still some sludge in the valves — we couldn’t get all of it out. You need to drive to get the oil through the system. But if it does stall, just start it again.”

He sounded cheerful for a change, which was nice, although it could very well be because I was about to put all of his children through college.

I let Sayyid know I’d be by after work, but before I even hung up, my feeling-flush friend was texting.

And right at that moment, a voice spoke up. It was the same voice I used to hear in my drinking days — the one that once had me convinced that bourbon was a nutritious part of a complete breakfast.

I was in no way willing to take advantage of anyone like that. But three days of trying to keep my anxiety tamped down had worn away at my defenses.

He’s good for it. You’re broke. It’s not like he’ll ask to see a receipt. He wants to help. This will be helpful. You’re the one doing him a favor, when you think about it.

Hey!” I shouted. “You know what’s louder than the disembodied mouthpiece of addiction? Oracle cards!”

And I pulled out my Liminal Spirits deck and threw down a spread.

In retrospect, this was probably not the most rational way of combatting the persuasive effects of panic-fueled avarice. But neither was arguing with myself in the back room of a leather shop. And either way, the cards spoke clearly enough that even the voice was like, “Well, shit, my bad,” and shut the hell up.

So, Mandrake in the present: Could my friend have romantic feelings towards me? Possibly. But Mandrake also says not to take the easy way out, or look for shortcuts. Fox crossing the present suggests that I can be witty and charming, but also implies dishonesty — which is what I’d be indulging in if I listened to the voice.

Owl in the past shows that I’ve been in this situation before and made a wide decision then, which tells me that I have the wherewithal to do so now. And Bone in the future just asks a simple question: What do I want my legacy to be?

With all of that in front of me, I picked up my phone, typed “Fifty dollars,” and hit send. And then fifty bucks landed in one of my cash apps, and I responded with beholden praise, and my friend replied with a kissy-face emoji.

I collected Pukwudgie this morning, and after some final, vaguely Taoist words from Sayyid (“Drive, my friend. Drive.”) I headed off to work. Pukwudgie immediately started bucking and sputtering, and he stalled twice. (You know what’s more enjoyable than limping along at 15 miles an hour in rush hour traffic with your hazard lights on? Nothing.) Panic hit like a head-on collision, and I almost pulled over and called Sayyid to just come get me. But then Pukwudgie’s innards roared, and he lurched forward, and everything was suddenly smooth.

Since everyone pretty much accepts Pukwudgie as a living organism at this point, it was like he belched hard enough to pass a kidney stone. Which was kind of funny, considering that yesterday, I told Ben that I was going to coordinate a mass Chaos Magic working to blow all the gunk out of him.

In Alcoholics Anonymous, people will often say, “My disease is doing pushups in the parking lot,” meaning that if they slip up or relapse, active alcoholism could easily take over their lives — or just take their lives. And the same goes for alcoholic thinking: Even if I’m not drinking, I still have to pay attention and make sure that my (currently curtailed) desire for immediate gratification isn’t secretly calling the shots.

I can’t listen to the voice, but I do have to listen for it.

In this case, I let the voice get a little too plausible. And while I realistically knew that I was going to do the right thing, I don’t ever want to get myself into another situation where I’m second-guessing not swindling my friends. The Liminal Spirits backed me up, which was right neighborly of them, but I ultimately need to be able to trust myself to make good choices, and not expect anyone (or Anyone) else to handle decisions for me.

I am not joking about the mass Chaos Magic working, though — I even tried to write a chant to send out to everyone, but I ended up just whining to Ben about how impossible it was to find a good rhyme for “sludge.”

Being far more adept at verse than I, Ben fired back with the following:

Engine is cleaned,
Holding no grudge,
Up with the speed,
Out with the sludge.

While I will continue to work on my own recovery, I will also make a motion that all couplet-related quandaries be directed straight to my boyfriend.

Like what you’ve read? You can buy me a coffee about it (with all proceeds going to the “Keep Pukwudgie Alive for as Long as Possible” fund). 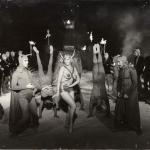 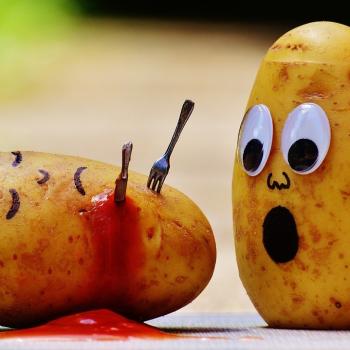 Pagan
By the Pricking of My Thumbs, Something Something...
Fivefold Law 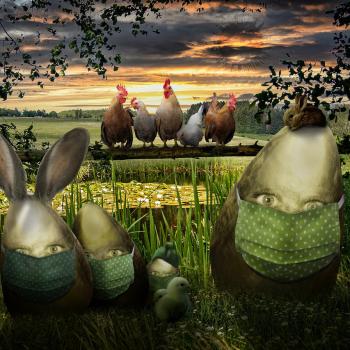 You’re Just Making It Up As You Go
Our religious, spiritual, and magical traditions are a great foundation. But sometimes...
view all Pagan blogs
What Are Your Thoughts?leave a comment