It started with a random video popping up on one of my social media feeds, in which a fully-grown adult was happily dancing down the sidewalk in a pair of light-up LA Gears, followed by a clip of a woman proudly displaying a Strawberry Shortcake doll. The gist was that people were buying things they never had as kids to help heal their inner child.

The following morning, I put on NPR as I was driving to work, and I tuned in just in time to catch an interview with the owner of the Houston Toy Museum, who was describing how the Magic 8 Ball was first produced in 1948. And I was like, “Whoa. If that ain’t synchronicity. I should really get a Magic 8 Ball.”

And right after that, I learned that The Gorgon’s Guide to Magical Resistance had received its first (and thankfully only) one-star review. Quoth the disgruntled critic: “If your sole desire is to push woke agenda into the universe[,] then this book is for you.”

At which point I was like, “Well, now I have to get a Magic 8 Ball as a political statement.”

I know that seems like a weird leap of logic, even for me. But I promise I mostly know where I’m going with this.

What we now know as the Magic 8 Ball originated with Spiritualism, when a man named Albert C. Carter invented a hand-held oracular device inspired by the spirit writing equipment utilized by his mother, a professional clairvoyant. Originally a small cylinder called a Syco-Seer, the device was rebranded and patented as the Syco-Slate, and the tubular casing was reworked into a sphere to resemble a crystal ball.

Sales of the fortune-telling product were modest at best, until 1950, when it caught the attention of the Brunswick Billiards company, who asked the makers to create a promotional version shaped like an 8 ball. Initially sold as a paperweight, it was soon marketed as a children’s toy, which caused its popularity to skyrocket. Rights to the 8 ball were eventually acquired by the Mattel corporation, who continues to produce the toy today.

So here’s where things get fun: While it was never explicitly stated or proven, some people believe that Brunswick got their promotional idea from the 1940 Three Stooges short film You Nazty Spy!, specifically the scene in which the character Mattie Herring — portrayed by a dazzlingly pokerfaced Lorna Gray — predicts the Stooges’ eminent demises by gazing into (you guessed it) an oversized 8 ball.

You Nazty Spy! was the first commercial film to satirize the Nazi Party’s rise to power in Germany, at a time when the movie industry was prohibited from offering any kind of political commentary: The US government did not want to get involved in World War II and believed that movies containing anti-Nazi sentiment would galvanize the general population against the Axis powers. The Hays Code was very much in play, and motion pictures were required to portray countries outside of the US “fairly,” which basically meant not drawing attention to any controversial sticking points like designs on world domination or genocide.

However, the Hays Code and its enforcers only focused their censorship on full-length feature films. Short films, like those cranked out by the Stooges, pretty much flew under the radar, and as such, they made excellent vehicles for raising the public’s awareness of the growing Nazi threat.

If the Magic 8 Ball as we know it today really was an homage to a prop in You Nazty Spy!, then it’s a possibly unintentional but ultimately undeniable symbol of anti-fascism, hidden in plain sight. In a word, the Magic 8 Ball is woke. And I can’t get over how subversively cool that is.

And really, all magic, especially Witchcraft, should be woke. Despite the Protestant Right’s attempt to turn it into an insult, “woke” just means that one is aware of and alert to issues of social injustice. If we’re going to use Witchcraft to effect change in the world around us, we need to understand not only what needs to change, but why change is necessary, and what problems will continue to plague us if those changes do not occur.

Unfortunately, the Magic 8 Ball is a little too optimistic to function as an effective method of divination. Of the twenty possible answers it can give, ten are favorable, while only five are unfavorable (the other five are noncommittal), so it’s always going to lean towards saying “yes,” regardless of the question pitched to it.

But even bias can be validating at times. For instance, I just asked my 8 Ball if The Gorgon’s Guide will help push a woke agenda into the universe and got “It is decidedly so” in reply. As Joseph Addison once observed, even a stopped clock is right twice a day, and I can definitely work wokely with those odds.

About Thumper
Thumper Marjorie Splitfoot Forge is a Gardnerian High Priest, an initiate of the Minoan Brotherhood, a Discordian Episkopos, a recovering alcoholic, and a notary public from Houston, TX. You can read more about the author here.
Previous Post 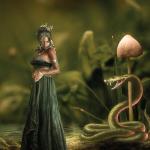 November 29, 2022 I Am the Kink Witch of TikTok, and I'm Making That Everyone's Problem
Browse Our Archives
Related posts from Fivefold Law