Agitating And Peacemaking: The Most Important Thing We Can Learn From Bree Newsome

Agitating And Peacemaking: The Most Important Thing We Can Learn From Bree Newsome July 13, 2015 Benjamin L. Corey

This weekend activist Bree Newsome (along with co-conspirator in doing good, Jimmy James Tyson) made an unannounced appearance at a gathering of Progressive Christians called the Wild Goose Festival, which is held annually in Hot Springs, North Carolina. 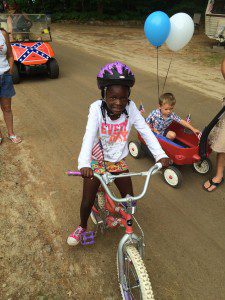 Just days after my own niece rode her bike in an Independence Day parade with a golf cart decked out in a Confederate flag riding behind her (a violent symbol that stood for the enslavement of her ancestors regardless of how some of the flag trolls who frequent my FB page would like to spin it), I was particularly honored to be able to hear Bree speak at Wild Goose, and to meet both her and Jimmy at a press interview after her appearance.

In the initial talk that lasted for about fifty minutes, Bree and Jimmy covered the background and motivation behind their act of civil disobedience, revealing that it was a well thought out and coordinated action. There was a team that ultimately involved upwards of 15 people, including climbing trainers and hours of practice climbing poles of various types, photographic surveillance and research into the setting and how the flag was attached to the pole, and even a liaison whose job was to greet the police when they arrived to inform them this was a peaceful act of nonviolent disobedience. The plan cumulated with her summiting the flagpole in Colombia, South Carolina, and declaring with the flag in hand:

“You come against me with hatred and oppression and violence. I come against you in the name of God. This flag comes down today!”

Bree stated that the Confederate flag action, and the symbolism of it all, was about much more than just a flag:

“Part of the reason we were so insistent on taking it down is because we had to make it clear that this isn’t just about the flag. It’s not just about a piece of fabric that flaps next to a metal pole. Because if that were the case we’d take it down, fold it, and put it up every day and it wouldn’t be a big deal. It’s about the ideology and that’s why we thought it was important- the symbol of a black woman taking it down and handing it to a white man.”

While there’s so much I could say from listening to Bree, I want to give attention to what I thought were among her most profound and challenging thoughts– particularly on the issue of peace and peacemaking.

Over the course of time I’ve seen two consistent critiques of those of us who believe in nonviolence, yet who also believe in confronting oppression and injustice. On one hand, some critique our commitment to nonviolence as being weak and allowing evil to prevail. On the other hand- those who see we are not afraid to forcefully confront oppression- oftentimes think we are hypocrites engaged in behavior that doesn’t appear to to be peacemaking. On this issue, Bree reminds us that nonviolence is not passive and peacemaking actually requires engaging evil head on, albeit with nonviolent means:

“I am an agitator, yes I am. A lot of people say agitation is the opposite of peace… we have some organizations that don’t want to actually agitate anything and they don’t want to push– and I have to remind them Gandhi and Jesus Christ were some of the biggest agitators who ever lived. If you go back to the book the only time Jesus was in the temple was when he was flipping tables over and waking people up. Sometimes, that’s what we have to do because a lot of times what the establishment calls peace is just order. Peace? That’s not peace.”

Let me tease out a few gems in her statement. First, she correctly identifies the fact that when people say peace they often just mean order or calm. However, this isn’t the biblical definition of peace. The biblical concept of peace comes from the Hebrew word Shalom and refers not to calm or order, but to a state where “everything is okay” or where a person is experiencing wholeness. And, it’s not just for the individual- shalom also refers to the “intactness or wholeness of a community.” (Duchrow 89) Or, as Perry Yoder argues, the word can even refer to “entire situations being made right.”

This begs the question: how do entire situations get made right? How do we pursue wholeness of individuals or communities? Well, I’ll tell you how we don’t get there: we don’t get there by refusing to confront injustice and oppression, or by telling the oppressed to stay calm (the later being something I’ve been guilty of previously, and hereby most contritely repent). However shalom is achieved, the first step is ending oppression, and that means we must name it and confront it– aka, we “agitate, agitate, agitate” as the abolitionists used to say.

One of the ways we agitate is through nonviolent disobedience, which is exactly what Bree has done. As Bree noted, nonviolent agitation “forces ugliness to reveal itself.” This of course, is uncomfortable in the moment but necessary– as people of Jesus we must shine light into the darkness and expose it so that it can be dealt with. When Bree took that flag off the flagpole, symbolically taking it down and handing it to authorities purposely without damaging it, she sparked a moment where she helped to shine light into the darkness so that it could be dealt with.

While many have been critical of Bree for this action (I had many people unsubscribe from my page for posting about it, and one person sending me emails demanding I remove the image of she and I together), what she did is exactly what Jesus taught and modeled for us.

For example, Jesus said in the Sermon on the Mount that if you’re hauled into court and sued for your coat you should strip down and give them the rest of your clothes. This would have resulted in the oppressed walking home naked, thus publicly shaming their oppressor (see Walter Wink’s work on this). It was the same with carrying the shield for a soldier the second mile– it was illegal to force someone to carry it a second mile, and doing so forced the oppressor to either break the law or beg the oppressed to stop– a total reversal of power dynamics (again, read Wink’s book, Jesus and Nonviolence). Jesus absolutely taught the oppressed to use public, nonviolent behavior to draw attention to the fact they were being oppressed.

Finally, there’s the example of Jesus. He agitated the power structures by letting them see him work on the Sabbath, by bringing a ton of booze to a party (he was labeled an alcoholic), and by befriending the outcasts of society. And remember that time he kicked over the tables and chased the animals out? That was an extreme act of nonviolent disobedience, done as an ultimate confrontation to those who were oppressing the poor and immigrants, and excluding the outsiders.

SPOILER ALERT: they executed him for it.

Throughout history, those who confront power structures and stand up for the oppressed, often end up dead. This is one of the reasons why Jesus waned those who wanted to follow him that they’d need to bring a cross with them. It’s as if he was saying, “sure, if you want to follow me, fine. But you’ll have to deny yourself, you’d need to almost hate your life, cause you’ll probably get killed.”

Nonviolent disobedience and confronting oppression publicly is one of the ways we shine light into darkness, and force oppressors to take a good long look at their oppression– just as a first century lawyer would have had a good long look at a naked defendant walking home with no clothes. While it is confrontational and agitates, it is done with the hope that the oppressor will repent– because making a person or community whole again means the oppressor is transformed, too.

Of all the things I think we can learn from Bree Newsome, perhaps the most important is the realization that peace refers to entire situations and communities being made right. Thusly, if one is dedicated to nonviolent peacemaking in the tradition of following Jesus, one is dedicated not to calm, but to making things right again.

This requires not passivity, but agitation– direct, civil, and nonviolent confrontation with power and oppression.

I for one am thankful for Bree Newsome and her brave actions, for they remind me that being a peacemaker includes being a nonviolent agitator. 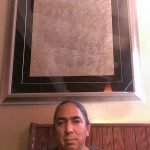 July 3, 2015
The Dilemma of the Fourth of July (By Mark Charles)
Next Post 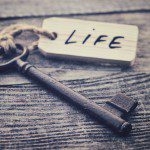 July 17, 2015 You Don't Have To Be Afraid To Be A Pro-Life Progressive
Recent Comments
76 Comments | Leave a Comment
"Interesting article. Makes sense."
Michael Donahoe 5 Reasons Why Many American Christians ..."
"So does the devil..."
Steven Waling 5 Reasons Why More Christians Are ..."
"The parable of the Rich Young Man is in both Mark and Luke. I'm not ..."
Kevin R. Cross There’s Only Two Types Of “Christian” ..."
"I appreciate this article, but for all the lifting up of scholarly study and academic ..."
John Creasy What Jesus Talked About When He ..."
Browse Our Archives
get the latest from
Progressive Christian
Sign up for our newsletter
POPULAR AT PATHEOS Progressive Christian
1