For The Good Of The Global Church, Mark Driscoll Should Resign

I don’t know about you, but truth be told, I’m exhausted from all things Mark Driscoll. In fact, I’ll be happy if this is the last post that I ever write about him.

For the past few years, there has been a never ending flood of Driscoll news and scandals that got to the point where I simply quit covering them. The bloggers who have done it well have practically had to dedicate their lives to keeping up with everything from Mars Hill– it’s simply been overwhelming.

There’s been the plagiarism.

The buying his way onto the NY Times best sellers list.

The stories of abuse from former members.

The stories of good leaders being forced out because of his lust for power and paranoia.

The admission that he previously bullied people online under a fake name.

The dodging of personal responsibility, saying that those he’s wounded are “anonymous”.

One of the key evidences of a larger problem with Driscoll is the fact that the last example was plural– there’s been a list of apologies. While the act of apologizing is typically a good thing, when there are repeated apologies for the same behavior, it’s evidence of a serious problem– and evidence that the apologies aren’t really apologies at all.

The more I watch the Driscoll saga, the more I see that he needs to learn what I frequently tell my 12 year old daughter: “sorry” is supposed to mean that you’re not going to do that anymore. When my daughter comes to us and wants to “fix things” after having wounded a relationship, there are occasionally times when the behavior in question is part of a larger pattern that has simply been repeated. In those times, we have a more serious discussion– particularly about her previous apology– and remind her that if one continues a behavior pattern after apologizing, they’re functionally lying— and not really sorry at all.

She gets it. Unfortunately, Driscoll doesn’t. Or so it seems.

The pattern of behavior– only worsened by the non-apologies– has taken a toll on a lot of people. Primarily, it has taken a toll on his own congregation.What has happened, and what is happening, is nothing less than sad and an outrage. I can’t imagine how Mars Hill, even as big as it is, will survive with any degree of health and wellness as long as he is at the helm and this saga continues.

In many cases, the impact of an abusive pastor is limited to that local realm– but with Mark it goes so much further. Yesterday I watched the Progressive Christian Internet starting to turn on each other over how to best help people deal with Mark’s behavior– people I consider friends and colleagues all expressing some points that had individual merit– an event which simply compounded the sadness I feel over the entire situation.

At the end of the day, I realized what I hope the rest of us all realize: the situation with Mark Driscoll is officially out of control. People have been wounded, and people are being wounded.

Most infuriating of all, is that none of this is good for the Church– the global body of believers who follow Jesus. It’s destructive on a local level, and it’s destructive on a larger one as well. It certainly isn’t the type of chronic news story that invites people into the Kingdom we’re supposed to be building.

Something’s gotta give. We– the Church– can’t continue on this path without some really, really bad consequences. There’s been enough already.

So the question becomes: what would Jesus have to say about this whole situation?

The answer to that question really depends on the angle you take– I think what he’d have to say would make everyone a little uncomfortable because that’s the kind of thing Jesus was known for doing. But as a starting point, what would he say?

He’d say that Mark Driscoll should resign as pastor of Mars Hill, that much is actually clear.

Honestly, we don’t even have to wonder– Jesus makes in plain in Matthew chapter 5 when he says:

“Therefore, if you are offering your gift at the altar and there remember that your brother or sister has something against you, 24 leave your gift there in front of the altar. First go and be reconciled to them; then come and offer your gift.” Matthew 5:23-24

Stepping down is what Jesus invites Mark Driscoll to do, and it’s the appropriate course of action for several reasons:

First, as I’ve said, it’s actually biblical. When serious sin occurs on the part of a clergy member, they are most often asked to step down from their leadership role so that they can focus on getting their own house back in order. Mark should not be exempt from the same standard we hold most of our clergy members to.

Second, it’s what’s best for Mars Hill. This church needs a season of peace, a season of healing, and a season without the constant distraction that having Mark at the helm is causing.

Finally, it’s actually what’s best for the global Church. The strife that Mark’s chronic behavior patterns have caused is not something that merely affects his own congregation– it’s affecting everyone in the Church, and is becoming a distraction from the Kingdom work we should all be busy doing.

For me, it’s a closed case: if Mark Driscoll truly loves his church, if he truly loves the global Church, and if he actually endeavors to live his life according to the principles found in scripture, then the next chapter of his life can only begin with one thing: resign.

I believe in a God of restoration– a God who never stops fixing broken things and who has an amazing way to use broken people (like me). I don’t believe that anyone– including Driscoll– is beyond the reach of God’s individual and collective redemptive plans. However, that new story I believe God longs to write cannot begin to take place until the madness and abuse ends, and Driscoll resigns.

July 31, 2014
Fight Human Trafficking in The Dominican & Start an Undiluted Journey!
Next Post 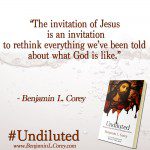 August 7, 2014 Generational Theology: It's What Jesus Invites Us To Let Go Of
Recent Comments
87 Comments | Leave a Comment
Browse Our Archives
Related posts from The Official Blog of Benjamin L. Corey