How Violence Is Justified But Homosexuality Is Wrong, When You’re A Biblical Literalist

How Violence Is Justified But Homosexuality Is Wrong, When You’re A Biblical Literalist October 7, 2014 Benjamin L. Corey

I spend a lot of my time discussing Christian discipleship and educating people on the Christian doctrine of nonviolent enemy love. It’s not an easy game, but one that I like playing. One of my joys on the blog has been to watch people transform on the issue of enemy love– there have been so many out there who have reached out and told me of your journey to embrace Christ’s teaching to love enemies– stories that give me hope when I deal with folks from the opposite side of the spectrum.

In the hundreds of internet discussions I’ve had on the issue, I’ve noticed a trend. While not a scientific poll, it’s been my experience that most of the folks who reject the nonviolent teachings of Christ are also people who are in the non-affirming camp, arguing that the Bible’s position on homosexuality is clear in that it is unequivocally a sin. I’ve sat back and dissected a host of arguments and various reasons they’ve given to me on both issues, and compiled a list of comments and quotes from my dialogues with people. When I began to take a closer look at the thought process, I noticed an interesting approach to biblical interpretation that as your chief explainerologist, I’ll be happy to explain to you.

When presented with the issue of homosexuality the responses are immediate, and most can be summed up with the statement, “the Bible is clear on this.” Here’s a quick chart on some of the things I’ve heard said: 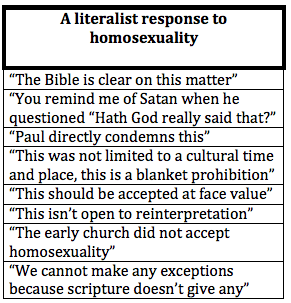 Now, when I ask those same people about Jesus’ call to love our enemies, no longer practice “an eye for an eye”, and his teaching to “not respond with violence in-kind to an evildoer that you may be children of God,” I get a very different response, as seen here:

And this is how violence is justified and homosexuality is wrong when you’re a biblical literalist: you just change the rules by which you interpret scripture when you get to the issue of violence.

The question is, why? Why insist the Bible be interpreted plainly in one scenario and then pull out an arsenal of excuses the next?

The simple answer is this: we’re more interested in changing them (whoever that is on any given issue) than we are changing ourselves. We expect the message of Jesus to be costly for someone else, but when it comes to sacrificing ourselves, not so much.

For a conservative literalist, condemning homosexuality (assuming they’re not gay) doesn’t come at a price– it’s someone else who would then be forced to enter into a life of celibacy. When it comes to enemy love however, that’s a sacrifice of following Jesus that might cost us something.

And so, it’s much easier to abandon the same hermeneutical principles used ten minutes prior so that we can keep “following Jesus” without having to change or make a radical sacrifice.

Bottom line: if you think that “love your enemies” is fair game for a thousand loopholes and can’t be taken at face value, then you probably shouldn’t be drawing hard lines on any other issue in scripture.

Because, if “love your enemies” isn’t straightforward, we should probably just throw up our arms and admit that nothing else in the Bible could be, either.

October 6, 2014
What We Can Learn From The Failure Of The Religious Right (And Why They're In A Panic)
Next Post

October 9, 2014 Why I Just Couldn't Be An Atheist, Even If I Wanted To
Recent Comments
384 Comments | Leave a Comment
"I appreciate this article, but for all the lifting up of scholarly study and academic ..."
John Creasy What Jesus Talked About When He ..."
"Yep.That's why I'll never debate an atheist. First, I respect their courage of conviction. And ..."
Jislaaik Rockadopolis Why Do Intelligent Atheists Still Read ..."
"Thank you for this article. I just wonder how one can believe that God did ..."
𝙀𝙅 𝙃𝙞𝙡𝙡 Why Do Intelligent Atheists Still Read ..."
"But it is false and fallible, and as a result do have different standards for ..."
𝙀𝙅 𝙃𝙞𝙡𝙡 Why Do Intelligent Atheists Still Read ..."
Browse Our Archives
get the latest from
Progressive Christian
Sign up for our newsletter
POPULAR AT PATHEOS Progressive Christian
1