The Religious Right has failed, and now they’re panicking.

They’ve been this way for quite some time, but I think we’re about to enter a new era of desperation as they attempt to plug the holes in their boat and keep it from sinking. Unfortunately, I haven’t seen any fresh and inspiring ideas produced from that camp in a long time (something I’m completely open to; I don’t care where a good idea comes from) and I’m not confident they’ll be able to prevent the ship from turning broadside.

They know it, and we know it: the movement of the “Religious Right” has failed. What we’re seeing out of the Religious Right is similar to when a star dies– after the death of a star there’s still some fusion activity going on, the core begins to collapse under the forces of gravity, and the outer layers temporarily heat up as the star undergoes a prolonged death experience. The star is dead– out of fuel– but the actual death process can take a few billion years.

The death of the Religious Right is similar– though it certainly won’t take nearly as long to become a dwarf in the religious solar system. 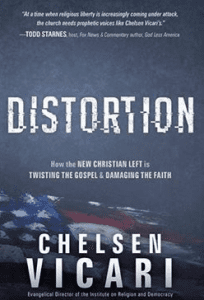 As part of the death process, they’re grasping for straws and attempting whatever they can do to escape the inevitable. Case in point: there’s a new book just released by Chelsen Vicari called Distortion, which is basically a progressive Christian hit-list packaged with the same old ideas they’ve always had. The book was promoted as a book that would “name names” of the people who are destroying the faith, so that parents could learn them and protect their precious children from their harmful ideas– ideas like nonviolent love of enemies.

Those people damaging the faith? Well, the list includes friends like Shane Claiborne, Sarah Bessey, and a host of others (including me). People can say whatever they want about me, but anyone who thinks that Shane and Sarah– two of the most inspiring Jesus followers I know– are the enemy or a “menace of the Gospel,” is someone who has had a severe break with reality, and probably doesn’t understand the Gospel at all.

The book (endorsed and promoted by hate group leader, Tony Perkins), sadly shows that they are in fact, completely out of ideas, and all that’s left is to repackage old ideas (war & Israel are good but social justice for the poor, nonviolent enemy love, and gender equality are all bad). It’s a paradigm of “out with the new, in with the old” but delivered by a younger face who, instead of giving a fresh spin to things, tries to prove rightness by maligning those who don’t stand in solidarity with John Hagee’s fetish for global violence or the official Republican party platform.

Yet, here’s what I find the most interesting about Vicari’s faux moral superiority: when I heard about being mentioned in the book I looked her up, and turns out, I’ve met her– and remember the interaction. She introduced herself after a panel discussion on Christian blogging at C21, and introduced herself as a former fundamentalist and fan of the blog– an interaction she tweeted:

She played the act well (fool me once), I’ll give her that (apparently “thou shalt not lie” is conspicuously missing from her Bible). But, that doesn’t change the fact that the movement she’s trying to reignite is dead, and there’s nothing she’ll be able to do to revive it. She especially won’t be able to do it with the whole “Jesus would have been a gun-loving, anti-feminist American” kinda thing, because younger Christians are catching onto the fact that the American version of Jesus is a sick caricature of the real thing, which is precisely why I wrote the book, Undiluted.

Now, with the growing Hail Mary attempts to keep the Religious Right alive, I think there’s a key lesson we can all learn from this– and the lesson is found when we uncover why they are panicking:

You see, the Religious Right isn’t so much of a Jesus movement as it is a political movement. It exists to spread an enact ideas through power and control, and without that power, they feel helpless– and their only solution is to “defeat the enemy (the left) and take the country back”.

It’s all about power… achieving it, maintaining it, and getting it back if lost.

And this is where we have a very important lesson to learn: the invitation of Jesus is not an invitation to acquire power– it’s an invitation to reject power. In the Jesus paradigm, it is not the power seekers who are blessed, but the meek– the nonviolent, gentle, power rejectors who find God’s Kingdom.

The moment we see power as being necessary to build God’s Kingdom in the here-and-now, is the moment we completely miss the point of it all. The truth is, God is the one building something in the world, and he doesn’t need us to achieve power in order to partner with him in building it.

When we combine the message of Jesus with the need for political power– whether liberal or conservative– we attempt to build a Kingdom that depends not on God, but on winning elections and destroying our enemies. Since movements such as the Religious Right rely on power, they are nothing without it– which doesn’t sound like the movement Jesus invites us into. In fact, throughout history we see that the Jesus movement spreads the fastest when his followers are not only out of power, but when they are actively oppressed by those who are in power, such as the early Church or the modern Church in China.

The quest for political power kills the Jesus movement and becomes a distraction from the real work to be done– the Kingdom grows best, and always has, when followers reject the need for political might.

Those of us who refuse to learn this lesson will go the way of the Religious Right– we’ll eventually fail and get lost in a never ending cycle of trying to get power back. Then, one day, we’ll look back and realize we wasted our lives trying to gain power at the top of the mountain instead of quietly building a Kingdom in the trenches.

Chelsen Vicari and those in her club are free to go waste their lives spying on their enemies at conferences to devise a strategy to “take the country back,” but I’ve got a subversive Kingdom to help build, and I don’t need political power in order to partner with the architect. 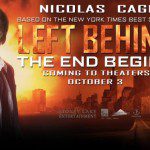 October 4, 2014
10 Movies That Were More Biblical Than "Left Behind"
Next Post

October 7, 2014 How Violence Is Justified But Homosexuality Is Wrong, When You're A Biblical Literalist
Recent Comments
142 Comments | Leave a Comment
Browse Our Archives
Related posts from The Official Blog of Benjamin L. Corey