Why We Need to Stop Using the Term “Illegal Immigrant” 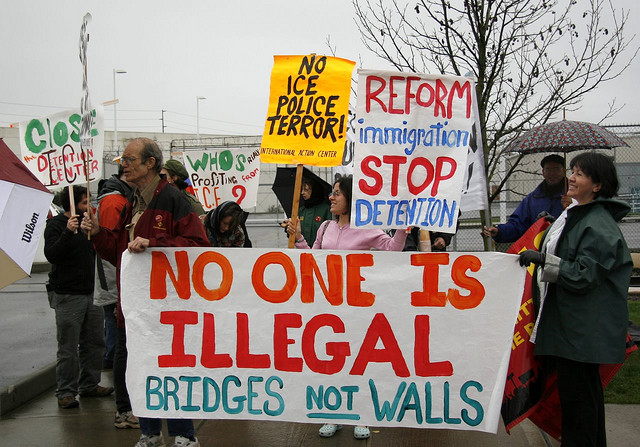 As the Senate recently passed long awaited immigration overhaul and the bill now heads to the house, the long-standing national discourse on the issue of immigration will likely heat up again. As we participate in these discussions my hope is that we, especially Christians tasked with peacemaking and reconciling, will find ways to build bridges instead of erecting walls. As a first step in this bridge building, I pray that once and for all, we will stop using the term “illegal immigrant”.

Here is why I feel Christians need to stop using the term “illegal immigrant”:

The term “illegal immigrant” is a misleading and dishonest term, which violates the 9th commandment.

The term “illegal immigrant” lends one to believe that an individual is currently doing something illegal, or that their presence in our country is an ongoing, illegal act. In regards to undocumented workers, this is simply not the case. The crime which undocumented workers commit is a violation of “8 U.S.C. § 1325: Entry of Alien at improper time or place”, a federal misdemeanor. Their crime is crossing the border at the improper time and place; however they are not currently doing anything that is illegal.

Therefore, using this term that has a less-than-honest connotation, is a violation of the commandment to not “bear false witness against our neighbors”.

The term “illegal” singles out those who committed one, specific, federal misdemeanor, but is never applied to other violations.

The Apostle Paul tells us: “Here is a trustworthy saying that deserves full acceptance: Christ Jesus came into the world to save sinners–of whom I am the worst.” (1 Tim 1:15) This means that as Christians, our humility should extend to the point that we view our own transgressions to be more serious than that of others.

In my lifetime, I have: defaced currency (I crushed a penny in a vice to see what would happen), illegally transported fireworks, and a host of other things that are probably against the law somewhere. However, no one calls me an “illegal”; they just call me “Ben”. It would be morally wrong for me to single out and treat differently, a group of people who have committed a federal misdemeanor, when I have also broken those same set of laws.

Even the most egregious criminals in our society are not called “illegals”, so why do we reserve this term just for people who are in the country without documentation? It is because:

The term “illegal immigrant” has morphed into a racial epithet.

Let’s just be honest for a second- regardless of where you fall in the immigration debate, we should be authentic and admit that when we say “illegal immigrant” we’re not exactly referring to white Europeans. Whether or not this term has non-racially charged origins, the meaning of language in this case has morphed so that it now has connotations of racial minorities, and is offensive to many.

As Lawrence Downes from the New York Times once wrote, “illegal” is often “a code word for racial and ethnic hatred”. One need not use the word “illegal” in many circles before you see the genuine nastiness and hatred the term often evokes.

Don’t think it’s a racially offensive term? Fine, but I’m telling you that many racial minorities receive it that way. On that factor alone, as Christians we ought willingly stop using this term based upon the biblical instructions to: be kind and tenderhearted toward one another (Eph 4:32), and to willingly refrain from behaviors which offend others (1 Cor 8:13).

The term “illegal immigrant” cultivates hostility, animosity and mistrust against our neighbors.

Yesterday our local paper the Sun Journal posted an article regarding a cash reward for information leading to the arrest of the individual who recently defaced a picture of the US flag, as seen here: 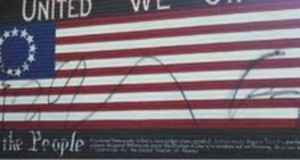 What was one of the first comments posted under the story? It was this:

Using offensive terms for racial minorities breeds the type of animosity and mistrust, seen here. We, as Christians, are called to be “ministers of reconciliation” (as I wrote about here) but when we use terms such as “illegal immigrant” it counteracts the type of cultural healing we are supposed engage in. There are nearly one hundred verses in the Bible commanding believers to care for the immigrants among us (legal or undocumented), and we can start caring by refusing to use language which breeds animosity, mistrust, hatred and violence. For example, as we have watched the illegal immigrant debate ramp up in national discourse, we have also seen an increase in hate crimes against Hispanics as well as an increase in hate groups, as documented by the Southern Poverty Law Center.

We need to realize that the language we use, matters. Language can be used for healing and restoration or can be used destructively. Regardless of our intentions, the use of this term has resulted in a negative impact on our culture. As Jesus followers, we must be working towards the opposite end: the healing of culture.

We cannot claim to be “loving our neighbors” if we are using pejoratives to reference them.

The term “illegal immigrant” is dehumanizing.

Several years ago I worked for an organization that specialized in developing employment opportunities for individuals with disabilities. I remember in those first few weeks, much of the training was geared toward re-wiring my brain to always refer to an individual as a “person first”. I had not consciously realized that all too often in society we do not refer to individuals as “people first”,  but often reference them in ways that intentionally or unintentionally dehumanize them.

I recently read an online press release about a family down south who had just adopted two children from Africa. I almost spit my coffee all over my iMac when I read the headline: “Couple Adopts HIV Children”.

They were beautiful children with many great qualities; I have no idea on earth why anyone would want to refer to them as “HIV Children”. The term set aside their humanity and gave them the primary label of “HIV” which caused readers to primarily see them in light of their HIV status, instead of their status as human beings.

The term “illegal” is no different. It dehumanizes because it causes us to view another individual primarily through the light of something they have done, instead of what they really are: human beings.

My friends, my fellow countrymen…

As Christians, we need to start asking ourselves: is my attitude on this issue motivated by political beliefs and nationalistic attitudes, or is it motivated by a loyalty to the Kingdom of God and the way of Jesus?

Regardless of where we fall on the issue of immigration reform, we should be willing to adjust our language so that we do not speak falsely against our neighbors, so that we do not use language which is divisive, and so that we can contribute to the healing of culture- instead contributing to a culture of resentment and hostility.

Please: join me in embracing our common humanity by no longer using language which drives a wedge between us.

June 27, 2013
Why Christians Can't Defend The Actions of George Zimmerman
Next Post

'But if it takes effort to...
slacktivist
Books by This Author Books by Benjamin L. Corey