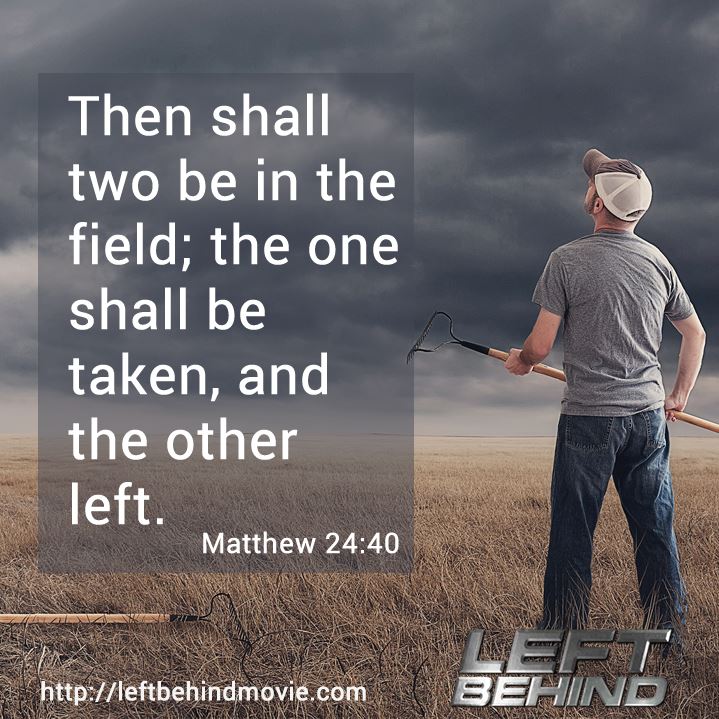 In the lead up to the release of the remake of Left Behind hitting theaters in a few weeks, I wanted to take a moment to tell you about the most ironic thing the Left Behind movie (or rapture believers) won’t tell you about getting “left behind.”

The basic premise of the theology is this: the world is going to get progressively worse as “the end” draws near. Before the worst period of time in world history (a seven year period called the “tribulation,” though there’s no verse in the Bible that discusses a seven year tribulation) believers in Jesus are suddenly snatched away during the second coming of Christ (which rapture believers argue is done in secret and without explanation, instead of the public second coming described in scripture).

The entire premise of the theology and the Left Behind movie is based on a passage from Matthew that you’ll see in the official Left Behind image included to your left. The passage states:

“Then shall two be in the field; the one shall be taken and the other left”.

And this is where we get the term “left behind”… Jesus said “one shall be taken and the other left.”

Pretty simple, no? It appears from this passage that Jesus is describing an event where some people actually do “get taken” and the others are “left behind.” It must be a rapture then.

As I have explained before, the chapter of Matthew 24 is a chapter where Jesus describes the events that will lead up to the destruction of the temple which occurred in AD 70. That’s not so much my scholarly opinion as it is what Jesus plainly states in the first few verses of Matthew 24; it is a context pretty difficult to explain away since Jesus says “this temple will be destroyed” and his disciples ask, “please, tell us when this will happen.” The rest of the discourse is Jesus prophesying the events that will lead up to the temple’s destruction, which we know historically unfolded as Jesus had predicted. (As I have alluded to in What Jesus Talked About When He Talked About Hell and Don’t Worry The Tribulation Is In The Past, if one does not understand the significance of the destruction of the temple to ancient Judaism, one will have a very hard time understanding what Jesus talks about when he talks about “the end.”)

Anyhow, during the end of this discourse in Matthew we hit the “rapture” verse: “one will be taken and one will be left.” Surely, this part must be about the future, and Jesus MUST be describing a rapture. Since that’s what my childhood pastor taught me, it’s probably a good idea to stick with that.

Just one problem: Matthew 24 isn’t the only place where Jesus talks about “some being taken and some being left behind.” Jesus also discusses this in Luke 17 when he says:

Building a compelling case for the rapture yet? Not quite. Check this out: Jesus’ disciples in the Luke version of the discourse must have been interested in this left behind stuff, because they ask a critical followup question. However, they actually seem more concerned with those who were “taken” than those who were “left behind” and ask Jesus for a little more information on this whole getting taken away stuff.

“Where, Lord?” is the question of the disciples. Where did all of these people go??

If this were a passage about the “rapture” as depicted in the Left Behind movie, one would expect Jesus to answer something to the point of “they were taken to be with me to wait out the tribulation.” But, that’s not what Jesus says. Instead, Jesus gives them a blunt answer about those who were “taken”: “just look for the vultures, and you’ll find their bodies.” (v37)

That’s right. The ones who were “taken” were killed. Not exactly the blessed rapture.

The Roman occupation was brutal, and when they finally sacked the city and destroyed the temple in AD70, things got impressively bloody. To be “taken” as Jesus prophesied, was to be killed by the invading army. This is precisely why, in this passage and the Matthew version, Jesus gives all sorts of other advice that makes no sense if this is a verse about the rapture. Jesus warns that when this moment comes one should flee quickly– to not even go back into their house to gather their belongings– and laments that it will be an especially difficult event for pregnant and nursing mothers. He even goes on to warn them that if they respond to the army with resistance (the very thing that causes the mess in the lead-up to AD70), they’ll just get killed (“whoever seeks to save his life will lose it”). Jesus, it seems, wants his disciples to get it: when the Roman army comes, flee quickly or else you might not be left behind!

Surely, Jesus is not talking about a rapture. He’s not warning people to avoid missing the rapture because they went home to get their possessions… he’s talking about fleeing an advancing army and not doing anything stupid that will get them killed (v 30-34).

Very practical advice for his original audience and would have come in handy for those who wanted to avoid being “raptured” (slaughtered) by the Roman army.

And so my friends, this is the most ironic thing the Left Behind movie won’t tell you: in the original “left behind” story Jesus tells in the Gospels, the ones who are “left behind” are actually the lucky ones.

So the next time folks tell you that they don’t want to be “left behind,” you might want to tell them to be careful what they wish for.

September 17, 2014
Why Jesus Wants You To Stop Spanking Your Kids
Next Post

September 24, 2014 Suicide Prevention: It's Time For The Church To Get Serious
Recent Comments
122 Comments | Leave a Comment
Browse Our Archives
Related posts from The Official Blog of Benjamin L. Corey