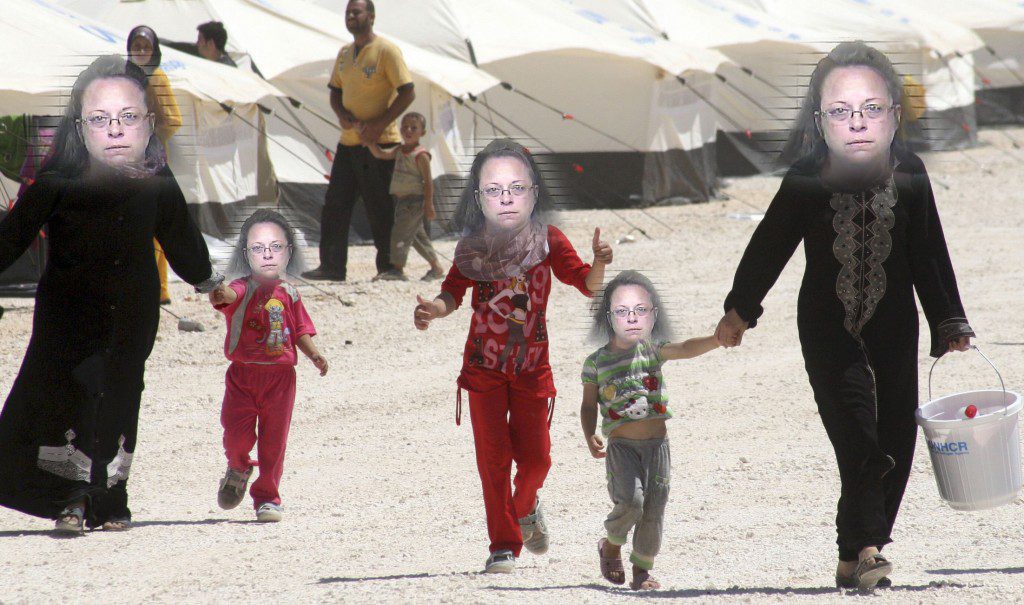 So, it’s breaking news that Kim Davis has been released from jail. For the past week, stories about Davis have comprised about 90% of my Facebook newsfeed. I even wrote one of them– it’s a story that has a time and place.

But with images of dead refugees washing up on the shores of Turkey, images of hundreds upon thousands who are now without a home and in desperate need of asylum and international aid, that time has officially expired.

The fact that, amidst the worse refugee crisis seen in a generation, so many American Christians are glued to the TV or internet to see what Mike Huckabee or Donald Trump will say about Davis, instead of being busy figuring out the Church’s role in addressing the refugee crisis, officially demonstrates everything that is wrong with Americanized Christianity.

I mean, seriously. We’re drunk on ourselves folks.

Across the ocean people are literally dying, and we’re hyper focused on some lady who chose to go to jail instead of doing her job?

That’s what we want to rally and protest?

That’s what we want presidential candidates focused on?

That’s what we want to keep blogging about?

I’m just going to go ahead say what needs to be said: we Americans officially need to get the hell over ourselves.

The world does not revolve around America’s so-called problems. We’re becoming people who ignore the life-threatening wounds of others so that we can talk about our embarrassing rash.

Case in point: I just checked the Facebook page of my good friend, Franklin Graham. 6 of his last 8 posts were either about Kim Davis, or anti-LGBT. How many were about the refugee crisis?

I’ll give you three guesses why, but you’ll only need one.

But before we start feeling too proud of ourselves, let’s be honest: in the competition between Davis and the Refugees, she’s winning the attention war on our side to.

So really folks, let’s get our crap together in the name of Jesus.

One of the central missions of the church is to feed the hungry, clothe the naked, and welcome the stranger– so we need to get busy doing that. However, we have a more pressing concern in regards to the refugees that needs the church’s attention: this is one of those rare cases where the Church will be limited in what we can do without the assistance of the government.

While churches all across America could mobilize to begin welcoming Syrian refugees into our communities (and I am seeing some beautiful church mobilization on this issue!) there’s a major problem: without a change in heart on behalf of the American government, there will be almost no Syrian refugees to help.

Yeah, that should make you want to have an epic facepalm moment. Right now America is an embarrassment to the world.

I believe in many areas the church could and would rise to the occasion and actually be the hands and feet of Jesus for a change.  First however, we need to pressure our government to allow refugees into the US, so that individual church communities can have the opportunity to put up or shut up for Jesus. There’s no other first step in doing our fair share– we must get on the phone with our elected leaders and demand a change in US policy. (And I say that as an Anabaptist who cringes at the thought– but this is one of those times and places where such an action would be appropriate.)

Until that moment however, we should be flooding charities working with the refugees overseas with money. We should be drawing attention to this crisis. We should be helping people understand what created this crisis and how we can avoid it in the future. We should be networking with churches in Europe to see how we can support them. We should be stepping up and using this as an opportunity to showcase to the world what the people of God look like when other image bearers are suffering.

God hears their cries– do we?

The Church in America should be consumed by figuring out our role in addressing the refugee crisis.

But here we are, talking about Kim freaking Davis.

Her moment of capturing the attention of the people of Jesus needs to expire. It’s time for the Church in America to get busy on the actual stuff that Jesus asked us to do.

(And here’s a place where you can get started: visit We Welcome Refugees and sign up to get connected with other Christians ready to live the mission of the church.) 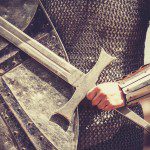 September 8, 2015
What Jesus Meant When He Said, "I Didn't Come To Bring Peace, But A Sword"
Next Post 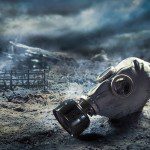 'We come in last in the...
slacktivist
Books by This Author Books by Benjamin L. Corey