A Florida pastor has earned the title of “Coolest Pastor Ever” in my book, after giving out free tattoos to members of his congregation.

During a sermon, Pastor Zack Zehnder said that if anyone wanted to get a tattoo of the cross, he’d find a way to pay for it. It seems he didn’t realize so many people would take him up on the offer (which he admits was somewhat sarcastic), but they did– and he paid up.

About a dozen people from the church have now been tattooed, something Zehnder hopes will be a lesson in acceptance and that will also provide a gateway to discussions on faith. As told to Yahoo News:

“People’s perception of church has probably never been as negative as it is today and so if we can do something to kind of flip that script and interact with them and do something in a unique and creative way, we’re going to do that.”

Zehnder went on to tell Fox 25:

“Every tattoo has a story. The landscape of faith has struggled to keep up with the times.  So if we can create a way to start a conversation, it doesn’t get better than that.”

Which is precisely why I love tattoos– they all tell a story, as do mine. The topic of tattoos is a frequent question I get by email from readers, so I’ve worked to compile all of your questions and will answer them today!

True– they were forbidden under the Law of Moses. However, first and foremost, you and I no longer live under the Law of Moses– we are Jesus followers. Secondly, if you look at the context of the prohibition, it was never so much about tattoos as it was about worshiping false gods. The prohibition in Leviticus 19:28 makes the context clear: “Do not cut your bodies for the dead or put tattoo marks on yourselves. I am the LORD.” Tattoos, in this historical context were tied to pagan worship and were done “for the dead”. So, even if the old law applied to us (it doesn’t) the context of the passage would not constitute a prohibition of all tattoos.

However, I do think there is a biblical principle to be considered here. In 1 Cor 10:23 Paul tells us that “all things are permissible, but not all things are beneficial”, meaning that just because we can do something doesn’t mean we should do something. In this case, I think a Jesus follower should give consideration to exactly what they are getting for a tattoo– or as I say, “think it before you ink it“. As a minimum, we don’t want to do anything (tattoos or otherwise) that would unnecessarily offend someone. Trust me, I spent 9 months of my life doing laser tattoo removal (which hurts at a minimum of 10 times more than actually getting a tattoo), so please don’t get one without thinking it through on a variety of levels, both practically and spiritually.

What are my tattoos of?

I get this question a lot and have been promising to post on it for some time. When I was in the military I got a few random tattoos, many of which I have since either had removed by laser or covered up by the artist I’ve been working with these last five years. However, I have since tried to give rhyme and reason to what I have– turning what was random into two half-sleeves that now have some flow and continuity to them. I agree with Pastor Zehnder in that tattoos are a great conversation starter– especially with other people who have tattoos. If you have one, you know that they tell a story. In January I had the fun opportunity to trade tattoo stories with Nadia Bolz-Weber, though I think she has me beat in the area of sheer volume of tattoos (but not forever– I’m coming for you Nadia!).

Regarding mine, I decided that I would turn my random tattoos into two flowing sleeves that would provide a gateway to discussions on my faith– which they now do quite well. During my last tattoo session I spent 4 hours talking to a room full of bored tattoo artists about Jesus as I explained my tattoos and what I was getting worked on that day. At the end one of them said “I’ve always been turned off by Christianity, but the Jesus you’re talking about is something I want to explore more”, which is basically the mark I hope to leave on the world summed up in one sentence.

My left arm was more tattooed up than the right when I got out of the military, so I’ve had less space to work with and some couldn’t be removed (blue ink is almost impossible to get out of the skin, black is easiest). So on the left, I have a water scene of sorts (mostly water from some cover up work) with a beautiful koi fish toward the bottom with the phrase “fisher of men” in biblical Greek across the bottom.

My right sleeve is one I’m a little more proud of, and am still working on as I have a good amount of space left to work with. First, I have an image of Jesus walking a dusty road and kicking up dust– inspired by the “Dust of the Rabbi” Nooma video. Yes, Rob Bell has seen the tattoo, and he says that I am “hard core”. This tattoo helps me talk to people about what you hear me discuss often: following Jesus instead of simply being part of the Christian religion. Opposite that tattoo, I have a scroll that says “I have been crucified with Christ and I no longer live”, which provides a transition to talking about the old me– the me I really don’t like… selfish, self-absorbed, materialistic, and how in many ways that person is dead (and how I work to put him to death when he tries to come back to life). I also have a large Celtic looking cross on that arm, inspired by a trip I made to an old monastery in Glendalough, Ireland years back. Finally, I also have a large depiction of the signing of the Abrahamic covenant where Abraham cut an animal in two and God walked between the carcass in the form of a “smoldering pot” and a “flaming torch”, which promotes conversation around God’s faithfulness and the command that we are to “be a blessing” to the whole world– a message I think we in American Christianity often forget.

What are you getting next?

My next big piece for that arm will be taken from the vision of Isaiah where he saw an angel take a coal off the altar of God and touch it to his “unclean lips”– should be a cool piece when I’m done.

So yes, Zack Zehnder is the coolest pastor ever.

No, tattoos are not generally unbiblical (they would be if the image itself was offensive or if done as an act of worship to another god).

Yes, you should think through your decision to get one thoroughly because tattoo removal hurts enough to have made my grandma cuss (which I don’t believe she ever did).

Yes, laser removal is expensive and time consuming. It also blisters your skin and can cause scarring.

Yes, Nadia has more tattoos than I do. She is also infinitely taller than I am, but that’s the story of my 5’6 life.

Yes, Rob Bell thinks I am “hard core” (okay, so no one has actually asked that question, but who doesn’t think I’m hard core?)

Oh, and lest I forget: use high SPF sunscreen on those tats! If you don’t listen to me, you’ll be getting that tattoo re-tattooed in about 4-5 years as some colors (like yellow) will quickly disappear from your skin entirely from sun exposure. Sun exposure will also make some of the lines on your ink less clean, which is almost impossible to fix.

So there– I’ve answered all of your tattoo questions, as promised. I leave you with Fox 35’s story on the coolest pastor ever:
FOX 35 News Orlando 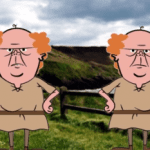 March 17, 2014
St. Patrick's Bad Analogies of the Trinity
Next Post

March 21, 2014 Missing Airliner A Snapshot Of The Rapture? (What Rapture People Ignore)
Recent Comments
7 Comments | Leave a Comment
"This headline is false. God's word is perfect faithful and true. Stop trying to rewrite ..."
Epiphany Mirabeth No, Franklin Graham, God Didn’t Destroy ..."
"Sounds to me like you are over-interpreting this verse. It's not "a law". It's simply ..."
KraigDeKompressorKruncha The Prosperity Gospel vs. Jesus: Why ..."
"There's a reply below... or however Disqus - may its name be thrice vilified - ..."
Stone_Monkey Why Do Intelligent Atheists Still Read ..."
"I've got this in my documents because it's one of my favorite ones:"Half the people ..."
james warren Why Do Intelligent Atheists Still Read ..."
Browse Our Archives
Related posts from The Official Blog of Benjamin L. Corey