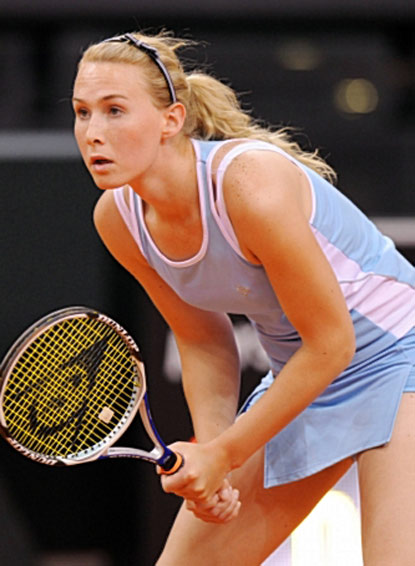 Sarah Gronert  is a 27-year-old retired German tennis player. She won a total of ten titles in her career and made it into the top 200 players in the world. Sarah was also intersex with both male and female genitalia. She had surgery at the age of 19 to become legally a female.

Intricacies of the universe are reason to say, “Hm, what a magnificent universe!” – not reason to bend and break it until it fits into our box. Same with intricacies of people.

Intersex  [intersex means people who don’t fit a binary (black & white) male/female] – and as a kid watching this show, I had no idea this was possible. What do you mean, no gender? People come in male or female, blue or pink. Sure, some are masculine or more feminine than others, maybe even gay. But this intersex was completely unfamiliar, too much to sort out. (How can we compartmentalize people if they have no gender?) I shoved the issue somewhere on the back shelf with my shoes.

Fast-forward some years to when God pulled me into the LGBTQ community. I began to discover a lot quickly, including an eye-opening TED talk on gender: Alice Dreger: Is Anatomy Destiny? I learned that some people are born with both genders, or neither gender. Or one gender outside and the other gender inside.

Some people are born with both a penis and ovaries. Some are born with a vagina and testes. I don’t say this to be crude or shocking. If this whole world is new to you, it may time to assimilate. But this is part of the human panorama, and while “polite company” may hesitate to talk about it, a lot of people live their lives here. That intersex person I watched on TV is part of a bigger human picture.

It doesn’t help any of us to cover our ears and say, “Lalalala.”

Why would I write about all this? Because intersex people have no choice: they were “born this way.” Some people are so uncomfortable with LGBTQ issues, they would love to shove the whole group of them back in the closet …and do it in the name of God.

Even those who are certain that LBGTQ people have sinfully chosen this “lifestyle” – and they believe this without having actually engaged with any LGBTQ people personally – even those people (if they are honest) must say, Hm. Intersex. Born with both parts, or neither. Clearly not a choice. Now what?

Maybe there are other things in this whole “gay debate” that we don’t understand too. Now what? Can we be at peace with that and keep the conversation going in love?

Open your mind to something you don’t know. Open your heart to someone you don’t love.

That you can do in the name of God.

What if life wasn't just a...
slacktivist