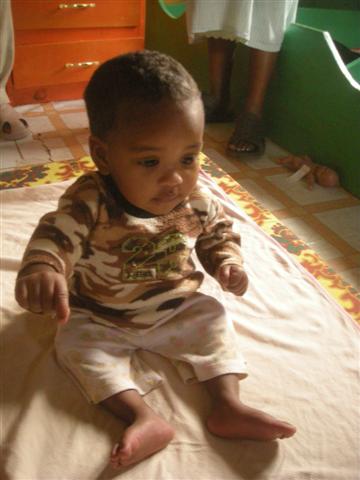 When we adopted Naomi from Africa, the orphanage had shaved her head. At two and a half, she was practically bald and more like a baby than a a toddler, weighing a mere 14 pounds.

Since then, I’ve learned much about my new daughter — she has a contagious laugh, she’s physically incapable of taking a bath without splashing the water on the floor, and her love of shoes would put Imelda Marcos to shame.  What took me a little longer to figure out was hair. At first, she rocked out her Patrick Stewart bald look.  Sometimes, I’d stick a bow on her head.  Everyone oohed and ahhed and our new addition.  But then, her hair grew, and things got more complicated:

Within months, I started getting stares from other black women in public.  If they were brave — and many  were – they’d casually mention good hair stylists I could use, tell me which websites had good information, and suggest effective products I should buy.  One lady at the store,  actually walked me to the hair style aisle and showed me exactly what I should do.  Another very kind woman sent product to school and left them in my older kids locker to help me learn how to care more effectively for her hair.  And these were not isolated incidents.  Far from it.

A very bold black cashier at the mall asked, “Why do white people go to Africa, pick up kids, throw a headband on them, and think that’s okay?”

I took a look at my cute little baby, with her little fro and her pink bow.

Another cashier took one look at Naomi and asked, “Who’s doing her hair for you?”  Her look of contempt told me that I needed to get someone to do her hair for me.  I wasn’t having a good day, and I almost burst into tears.  When she saw my face, she said, “I mean, you’re doing an okay job, you just might want to fix it.”

This never stopped.  It got to the point that I’d try to scoot through public places in order to avoid letting other people see Naomi, for fear that I wouldn’t respond to their criticism in a Christ-like manner.  (It’s not their fault. They, after all, didn’t realize they were the sixth person to come up to me at the grocery store.)

That’s when I found Chocolate Hair Vanilla Care, a fantastic website for white moms who need to learn about their black daughters’ hair.  An invaluable resource, I followed the website’s instruction to the letter.  I bought exotic lotions and oils.  I learned how to care for it.  That’s when I learned how to do things like these braids 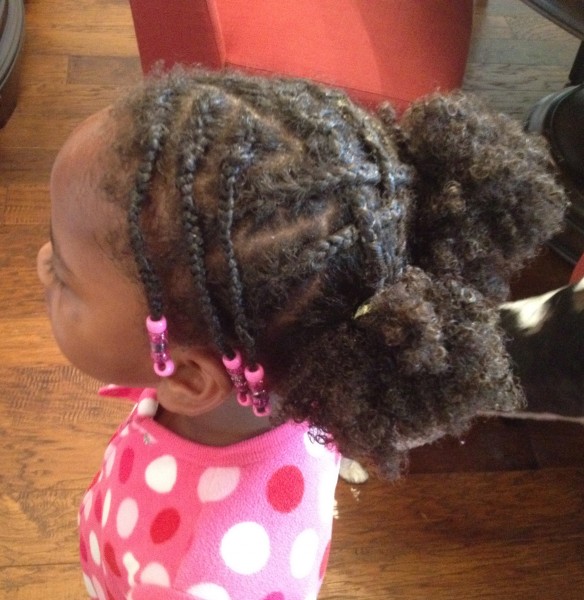 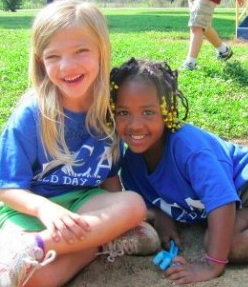 and I got better, and even experimented with larger, wooden beads: 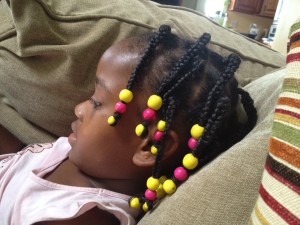 The lady at the mall was right.  One day, Naomi will be a beautiful black woman, and I want her to have pride in her hair and feel comfortable in various styles.  And if that’s going to happen, it means I have to learn a great deal about her hair… and fast!  I’ve done so many experiments on Naomi’s hair — some hits and some misses — that it’s a part of our weekly routine.  (I compare it to breastfeeding. I wasn’t able to nurse Naomi, since I missed out on her infancy.  But there’s something special about the hours time spent doing  hair — it’s our bonding time, the thing we do together that no one else in our family can do….  though her older sister Camille is getting really good at braids!) Sometimes, between hair styles, her hair looks this like this: 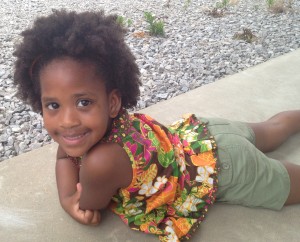 When I tell people about how much free advice we get from African American women, white people are incredulous. After all, little girls on advertisements and on television have their hair in afros.  What’s the big deal?  Well, as far as I can tell, there’s a lot going on, socially, politically, and culturally.  On Chocolate Hair, Vanilla Care website, there’s a great article called, “The Politics of Free Hair” which is well worth a read.  Rory writes about how many people give her unsolicited advice when she takes her daughter out in public with an afro.   You really wouldn’t believe how frequently it happens.  Rory says it happens every single time she takes her daughter out in public when her hair is natural.  I’d agree — sometimes several different people in one shopping excursion.

Yesterday, I was at Target in Spring Hill, Tennessee, and I braced myself.  I was in a week of “natural hair” because I was trying to avoid “part fatigue.”  The following conversation actually happened:

Cashier: You sure are pretty.

Cashier, to me: Have you ever thought of fixing her hair?

Me: Yes, I learned how to braid and I take care of it, but it’s been braided for so long I wanted to let the parts rest a bit and give her hair a chance to be natural.

Cashier: Well, I have been looking at it, and I can tell you don’t know what you are doing.  (Then, she proceeds to give me directions to a braid shop in my hometown.)

Cashier, to Naomi: How does your mom fix your hair normally?

Naomi: in twists, in beads, in braids, in an afro….

Cashier: Well, you sure are pretty, but you’d be even prettier if your mom took you to a braid shop.

If this happens every time I go out with Naomi when her hair is in an afro, it’s obvious: hair is complicated.  This was also very clear when Gabby Douglas was the first African American gymnast to win the All Around at the Olympics,  all anyone could talk about was the fact that her hair was “ugly.”  (“She lives with a white host family and they don’t know anything about taking care of her hair,” her mother explained.)

And that public outcry over a black child’s hair is not isolated.  Angelina Jolie, who adopted little Zahara from Ethiopia, was criticized in Newsweek for the way she did — or didn’t do — her child’s hair.  Read this condescending article from writer Allison Samuels:

Up until recently, Angelina Jolie seemed to be doing a pretty decent job with Zahara Jolie Pitt—providing essential and expensive medical care, purchasing land in Zahara’s native Ethiopia with the plan to build a health center, providing a life of adventure and opportunity… In recent pictures it’s clear Angelina Jolie hasn’t taken the time to learn or understand the long and painful history of African-American women and hair. If she had I can’t imagine she would continue to allow Zahara to look like she has in the past few months. Photos of  Zahara show the 4-year-old girl sporting hair that is wild and unstyled, uncombed and dry. Basically: a “hot mess.’’

I don’t know Allison Samuels.  She might be a fine person.  However, imagine if I turned this around and wrote, “Allison Samuels knows a lot about moisturizing cornrows, but how many children has she saved from poverty?  How much medical care has she given to children in need?  How much land has she purchased, how many health centers has she built? Has she adopted even one kid?”

Maybe she has.  Maybe she runs an orphanage for all I know.  However, it doesn’t change the fact that her comments undermine transracial adoption and orphan care. She suggested that one day Angelina’s daughter might grow up to resent her white adoptive mother, because of the lack of attention to her hair.  Now that’s emotional manipulation right out of the Target cashier’s playbook.

Ladies with serious opinions about hair, please listen to this adoptive mother’s plea:

Even if you’re black, it doesn’t give you the right or authority to give white parents’ rude advice by critiquing a black child’s hair.  It certainly puts us in an awkward situation, because it means many interactions we have with African Americans we casually meet in public deal with our families’ inadequacies.  The message you send to our daughters — intentionally or not — is that they would be better off if only they had black parents.

You may not mean to insinuate this.  You may simply want to help out a family you believe is in need, but it doesn’t help our daughters to overhear their mothers being constantly corrected over hair styles that it takes us several hours to create.

Or, you might actually believe that black people are better off being raised by black people.  You might look at her hair, and think, “Only a white mother would do that to her kid’s hair.  That’s why white women shouldn’t have black children.”  Believe me, I’ve heard that before too.  (If you’re in that category, please read, “I”m a White Republican Raising a Black Child: Deal with It.”)

Of course, I’m new at this.  I know my braids aren’t as tight as some would like, and I secure my twists with tiny bands even though I know you say it’s not necessary.  I do it anyway.  I’m writing this because I want you to know that it’s hurtful to constantly get advice about hair, when I’m already investing so much effort into it.  Rory, over on Chocolate Hair Vanilla Care, is very kind in her assessment of these interactions, believing the conversations to be opportunities for grace.  “How I respond to people will be etched in my daughter’s memory as she grows and learns to respond to unsolicited comments and criticism in the years to come,” she writes.

I’m trying to get there spiritually, but it’s hard not to take this criticism to heart.  The bottom line is this.  My daughter is black, and I want her to be comfortable in the black community.  However, she’s also mine.  I’ll fix her hair the way I think is best on the day, and I’ll brace myself for your criticism and disapproval.

But your words aren’t helpful, and you’re really missing the beauty and transformative love of adoptive families.

And that’s a real shame.

September 26, 2012
What Happened When I Gave My New Daughter a Doll in her Orphanage
Next Post

October 2, 2012 Jon Stewart Obliterates the Obama Administration's "Shoot First, Aim Later" Libya Response
Recent Comments
4 Comments | Leave a Comment
"and what makes this even better is that the two girls are sisters http://www.huffingtonpost.c..."
d Black activists cried "racism" over this ..."
"It's heart wrenching to hear about this. Our country is getting more vile and depraved ..."
BlackSun Syndicate Target proudly welcomes men to use ..."
"a wolf dressed as a sheep is still a wolf - if u have a ..."
Aussie In Austin Target proudly welcomes men to use ..."
"I am picturing a little turd in pajamas sipping coffee."
Cantbelieveyouthinkthis Los Angeles Craigslist ad somehow captures ..."
Browse Our Archives
Related posts from The French Revolution