Rare Glimpse of True Love: Last Season of The Office 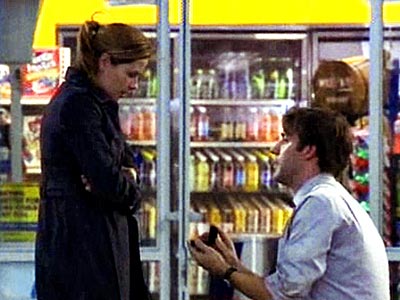 I’ve faithfully watched The Office, through thick and thin, over all the seasons of cringe-inducing silliness and fun.  The show seemed old by the time they finally decided to wrap it up, but I dutifully sat on my couch to watch it all wind down.

I’d invested too much of my life to give up now.

However, I was shocked at the emotion I felt as the characters I’d grown to love finally saw their documentary broadcast causing their lives to go in different directions.  The most poignant moment, in my opinion, was the culmination of weeks of anguish between Jim and Pam.  As you probably know, their relationship began as an office relationship, and ended with marriage and parenthood.  But when Jim took a job in Philadelphia without telling Pam, their relationship was strained.  The spark was gone.  Conversations were stilted and uncomfortable.  Under the advisement of their counselors, they began sarcastically “appreciating” each other, in awkward, forced affection.  It was uncomfortable, because it seemed so real. So terrible after “being there” when the relationship began.

Then, when it all seemed to be coming apart at the seams, Jim forgot his umbrella. This is what happened:

When the pastor’s voice over began, I was startled.  How rare is it to hear Scripture being read on television in a non-ironic fashion?

This moment was the culmination of much of what I love about the show.  And I’m glad they ended by showing viewers a glimpse of the true love that can’t be found in romance – no matter how cute the couple is!

May 24, 2013
The Adoption Audits: No Rational Justification
Next Post

May 28, 2013 Elizabeth Scalia Versus Shaquille ONeal: A Giveaway of the New Book "Strange Gods"
Recent Comments
0 | Leave a Comment
Browse Our Archives
Related posts from The French Revolution