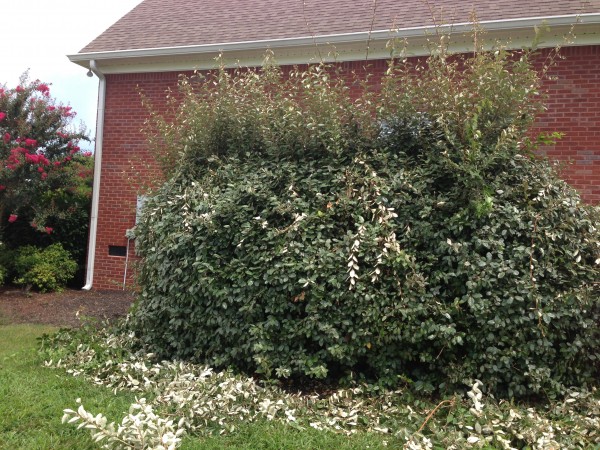 I hadn’t been attentive to my yard in Columbia until I recently realized the bush that was supposed to be nicely covering my air conditioning unit had gotten…  um…  “out of hand.”  I could no longer see out my kitchen window and the UPS man was afraid to deliver packages because he could no longer find the steps.

And so, I started trimming. And trimming.  And then, I got a ladder and trimmed some more.

Eventually, I came to an impasse.  I couldn’t reach the highest branches, and I’d run out of energy.  The only problem was that the bush was short in the front and tall in the back.

That’s when Roland — the best handyman in middle Tennessee — showed up to fix the oven.

“Sure,” he said, disappearing to his car.

In a minute, he arrived with a chain saw.

“I’ve always wanted to get rid of that thing,” he said.

Here’s to new beginnings and a handyman who knows when to plunge ahead in spite of my protests. 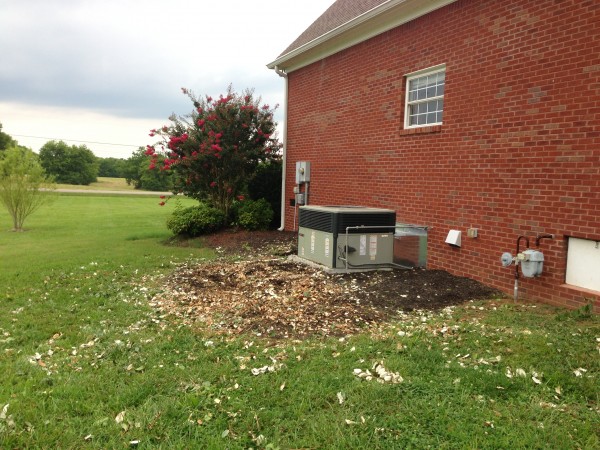 August 12, 2013
Puritanical Punctuality: When is Being Late a Sin?
Next Post

August 13, 2013 Gospel Singer Cut From MLK Event Over Gay Rights
Recent Comments
0 | Leave a Comment
"and what makes this even better is that the two girls are sisters http://www.huffingtonpost.c..."
d Black activists cried "racism" over this ..."
"It's heart wrenching to hear about this. Our country is getting more vile and depraved ..."
BlackSun Syndicate Target proudly welcomes men to use ..."
"a wolf dressed as a sheep is still a wolf - if u have a ..."
Aussie In Austin Target proudly welcomes men to use ..."
"I am picturing a little turd in pajamas sipping coffee."
Cantbelieveyouthinkthis Los Angeles Craigslist ad somehow captures ..."
Browse Our Archives
Related posts from The French Revolution