Charles Barkley : ‘We Spank Kids In The South’ [VIDEO] 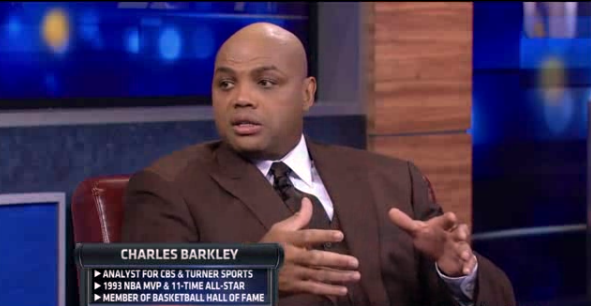 NBA analyst Charles Barkley commented on Minnesota Vikings Adrian Peterson who was indicted by a grand jury for reckless or negligent injury to a child.  Peterson spanked his son, leaving welts that a doctor reported.  Barkley admitted that Peterson had gone overboard in his discipline, but had this to say about spanking in general:

“I’m from the south. Whipping — we do that all the time. Every black parent in the south is going to be in jail under those circumstances,” he said.

The interviewer, Jim Rome corrected him.  “It doesn’t matter where you’re from: Right is right and wrong is wrong.”

“I don’t believe that because, listen, we spank kids in the south. I think the question about whether Adrian Peterson went overboard — Listen, Jim, we all grow up in different environments. Every black parent in my neighborhood in the South would be in trouble or in jail under those circumstances.”

The next day, he added, “A lot of my friends who are white and Italian sent me a last night saying, ‘I don’t know why you’re making this a black thing. Our parents spanked the hell out of us, too.”

Watch the whole interview below:

September 17, 2014 Is All Spanking Child Abuse? Why the media wants to tie reasonable parents to the Peterson case
Recent Comments
0 | Leave a Comment
Browse Our Archives
Related posts from The French Revolution