The San Bernardino Shootings and the Cost of “Clock Boy” Hysteria

A shooting in California happened suddenly and without warning.

A man who has been working in the area said he noticed a half-dozen Middle Eastern men in the area in recent weeks, but decided not to report anything since he did not wish to racially profile those people.

“We sat around lunch thinking, ‘What were they doing around the neighborhood?’” he said.  “We’d see them leave where they’re raiding the apartment.”

For a while there was an oft quoted motto from Homeland Security, “If you see something, say something.” 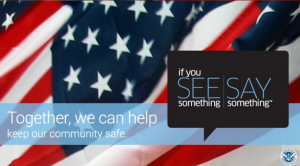 But that was before.

That was before “Clock Boy” Ahmed Mohamed, who brought what looked like a bomb to school.  You see, it wasn’t a bomb.  He was trying to make a clock.  Or something.  He didn’t really make a clock, he just stuffed the parts in a “pencil box” to show his teachers.   His English teacher “saw something and said something,” which resulted in a nationwide outcry against racism.

It looked like a bomb, after all.  (And under Texas law, it’s illegal to carry a hoax bomb.)

Yet, the teacher’s very responsible reporting of this incident almost broke social media.

The teacher — who no doubt makes a very small salary – had to sit back and watch as her student got an invitation to the White House and ultimately decided to sue the city for $15 million.

When the California workers saw a group of Middle Eastern men acting suspiciously, they were worried — even so much to discuss it over lunch.

But, they learned the lesson of Clock Boy and kept their mouths closed.

Has the President?  Has America?

The clock is ticking.

We’ve got to stop prioritizing political correctness over safety.

December 2, 2015
The Scary Stories You SHOULD Be Telling Your Kids
Next Post

December 3, 2015 Christmas Book Buying Guide: Top Ten Favorite Books I Read in 2015
Browse Our Archives
get the latest from
Politics Red
Sign up for our newsletter
POPULAR AT PATHEOS Politics Red
1