I hate the practice of saying, “Mean things were said on Twitter,” since the very social media platform seems designed to bring out the whackados.  However, the number of prominent liberal journalists tweeting out despicable statements about the death of a Supreme Court justice is worth noting.

Here are a few (Newsbusters has six more).  As Instapundit wrote, “By their tweets you shall know them.”

Dedicating the rest of this weekend’s marital sodomy to the memory of Antonin Scalia.

2. Dave Zurin, of The Nation and frequent MSNBC guest:

When political figures die, there’s a race to define their memory. That memory can have powerful repercussions. So remember Scalia’s victims — Dave Zirin (@EdgeofSports) February 13, 2016

Scalia was a monster and no one’s job entitles them to respect. https://t.co/q4v0Kk1ZFJ

when you go to harass women outside of planned parenthood tomorrow, be sure to hold your fetus poster at half-mast. out of respect. #Scalia

February 14, 2016
Before posting #Blessed on social media, know the difference between a gift and a reward
Next Post 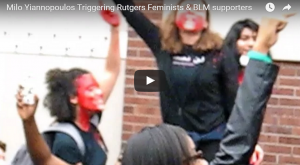