Zootopia shows dessert store refusing “certain” customers: what you need to know about its subversive politics 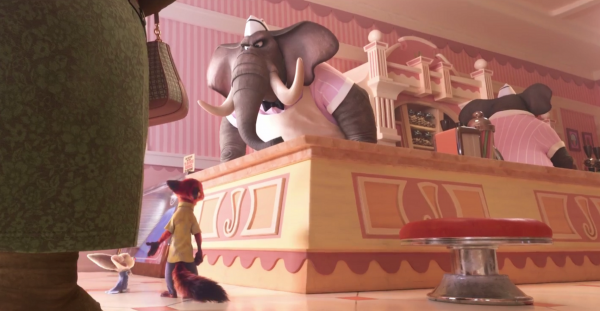 I knew Zootopia was a different type of movie when a fox and his son walk into a dessert shop and are promptly told that the owner reserves the right to refuse service to anyone.  Especially, in this case, foxes. The movie is set in “Zootopia,” a modern city where predator and prey gets along in spite of their differences, after years of evolving has enabled them to live together in spite of their obvious differences.  Pretty much.

Our protagonist, Judy, is a young bunny who wants to be a cop, even though rabbits have never been allowed on the Zootopia Police Force. Her sweet natured, carrot farming parents discourage her from this wild-eyed dream, since there’s danger there in the city.  (After all, you can’t trust certain types of animals.)

But by the time she gets old enough to apply for a job, the city has created a “Mammal Inclusion Initiative,” and she’s the first bunny to ever go successfully through the police academy.  When she gets to the big city (which has plant life like Los Angeles but otherwise seems more like New York), all kinds of animals live and work together pretty seamlessly. But an undercurrent of distrust exists amongst the species.

Which brings us to that dessert shop.  The elephants refuse to serve the predatory fox, as the idealistic young police bunny stands in line behind her.  At first, she puts her hand on the “fox mace” her dad had given her, but then she sees that the business owner is actually harassing a well-meaning fox who simply wants ice cream for his son’s birthday.    Stepping in, she announces that she is sick of that kind of prejudice and — after some threats about health code violations —  forces the store owners to serve the Fox.

Let’s pause here, because I know this scene will trip many parents up. First, the obvious.  The first character in the movie that refuses service to another also happens to be the symbol of the GOP, an elephant.  That has to be intentional, no?  Regardless, I’d argue this scene is much more evocative of a pre-Civil rights era scene than a modern day “refusal to bake gay wedding cakes” scene.  After all, bakery owners who refuse to do cakes for same sex weddings simultaneously welcome same sex customers for other occasions.  In the movie, the shop owners have a blanket statement that they refuse to serve anyone anytime.  In this instance, the dessert was for his son’s birthday.

This movie refused to offer up easy liberal platitudes.  Turns out the fox, named Nick Wilde (voiced by Jason Bateman) was actually a hustler.  He “forgot” his wallet, but the bunny paid for his son’s treat.  In her effusive praise of the fox, she actually described him as “articulate.” This — of course — echoes back to Joe Biden’s gaffe in 2008 when he described then candidate Barack Obama as, “the first mainstream African-American who is articulate and bright and clean and a nice-looking guy.” At another point, the bunny tells the fox “you’re not like them.”

So, yes.  We’ve got affirmative action, an allusion to the conflict between religious rights and same sex couples, a racial gaffe by Joe Biden, and we’re just getting started.  This movie also dealt with “microagression,” when a well meaning cheetah heaps praise on the first bunny in the police force. “Only a bunny can call another bunny cute,” she corrects him, pointing out that some interspecies chat is inappropriate.  The cheetah, who’s portrayed as gay, says something like “Who am I to stereotype you!”  (Parents, the cheetah quickly points out that he is in the oppressed minority group of “overweight predators.”)

But all is not well in Zootopia.  Several animals (who just happen to be predators) have gone savage.  They’ve gone back to their native stages of violence and aggression.  When the young bunny holds a press conference about this new development, she mentions it could have something to do with biology.  Chaos ensues.

As a movie going mom, I was electrified and a little uneasy at the heavy topics being shown on screen.  I would sometimes glance over at my daughter — who is black — and wonder what she was taking from these mature themes.  (This is a well-founded fear: I recently read her a Martin Luther King, Jr. book.  The following day she pointed to a black and white “One Way” sign and asked, “Is that one of those signs that says “whites only?”  However, I believe this movie dealt with issues cleverly enough that children won’t pick up on most topics.)

When society realizes that some predators are “going savage,” the Guardian writes, “Soon society devolves into an enormous Trump rally, with an unhelpful press corps fanning the flames of xenophobia and ignorance.”  But this description is too easy.  Okay, there might’ve been one scene that harkens Trump, when a politician explains her tactic  as “Fear always works!” But let’s face it.  If predators were suddenly and inexplicably reverting back to violent behavior, why wouldn’t the “prey population” be worried?

Director Byron Howard explained how the concept of the movie emerged:

It started with our research trips to… Africa, an experience where our first camp was thirty feet from a watering hole and we noticed lions would come in and drink right next to gazelles and Zebras which they normally eat. No one was misbehaving, no one was biting each other or attacking — it was a very interesting social dynamic. They come in, they drink, they look at each other side-by-side, and then they kind of part ways. And human cities are kind of the same thing, you have the collective of different groups who don’t always see eye to eye but they have to find a way to get along for the essentials. And that led us to a huge discovery where we talked to animal experts and they told us that, and we say this in the movie too, that 90% of animals are prey animals and the remaining 10% are predators — thats an automatic majority minority, and what an interesting thing to think, even those these animals [in Zootopia] have evolved and created this incredible civilization, what if they still held on to some of those sublimated fears and mistrust that have been around for thousands of years. Its very similar to what human beings experience. and thats where all of this came from.

This movie was subversive, clever, beautiful, and sophisticated.  We’re used to films that deal with overt racism (football teams who don’t accept the new black player or coach, for example). But this modern, funny, complicated movie tried to make us have a more nuanced reflection on the complicated state of race relations.

While some conservatives might take offense at the allusions, the movie’s themes (about a corrupt government’s influence over its citizens, the necessity of fighting and even changing one’s nature to become a better person, the undetected sin running rampant in your own heart, and taking risks even if you might fail) don’t feel liberal to me.  Relationships within the culture are complicated, and this movie did a great job at demonstrating the layers of complexity running right beneath the surface. 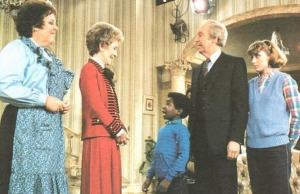 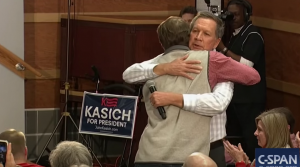