The Christmas wars throughout history 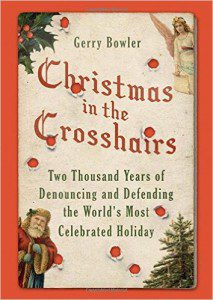 A new book by Gerry Bowler entitled Christmas in the Crosshairs:  Two Thousand Years of Denouncing and Defending the World’s Most Celebrated Holiday points out that the “Christmas wars”–the conflict between secular and religious observances of Christmas–have been going on throughout the history of Christianity.  The Bishop of Amasea complained in 400 A.D. about how Christmas presents make children greedy.  St. Augustine complained about the commercialization of Christmas.  And Christians have long complained about the conflict between the drunken revelry once Theassociated with the day and its true meaning.

Meanwhile opponents of Christianity have tried to either suppress or co-opt the birthday of Christ.  At one point in the Soviet Union, children had to be told that their presents came not from St. Nicholas but from Stalin.  And Nazi Germany sang a revised version of “Silent Night” that replaced Jesus with Hitler.

After the jump, an excerpt from a review of the book.

From Ruth Graham, Christmas in the Crosshairs by Gerry Bowler, reviewed, Slate:.

I don’t know if you’ve heard, but the real meaning of Christmas has been sadly overtaken by wanton capitalism in recent years. “This festival teaches even the little children, artless and simple, to be greedy,” as one critic put it. “The tender minds of the young begin to be impressed with that which is commercial and sordid.”

The year was 400, and the anxious writer was the Cappadocian Bishop Asterius of Amasea. Asterius’ pious fretting is quoted in Canadian historian Gerry Bowler’s Christmas in the Crosshairs: Two Thousand Years of Denouncing and Defending the World’s Most Celebrated Holiday, which makes clear that hand-wringing over the correct way to celebrate the Christ child started practically before the kid left the manger.

The refreshing takeaway of Christmas in the Crosshairs is that most contemporary agita about Christmas’ supposed decline is misplaced. The commercialization of Christmas isn’t a recent development; St. Augustine was pleading with people to give alms instead of holiday gifts in the early fifth century. The supposed erasure of Christ from Christmas isn’t new, either; devout killjoys have forever lamented the season’s secular revelry. And the “war on Christmas” has been enlisting troops for centuries; in Communist Russia, Christmas trees were banned, and children were told their gifts came from Stalin, not Santa. Despite all these obstacles, Christmas is now, Bowler announces, “the biggest single event on the planet.”