A problem with self-driving cars 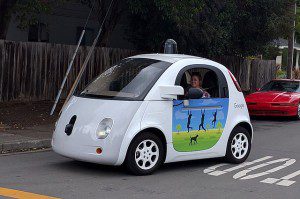 Automotive technology has advanced to the point that self-driving cars are already on our highways, though under experimental conditions.  And they may someday be feasible for the general public.

One problem, however, is that it is very difficult for the sensors on self-driving cars to detect bicycles.

Question:  Some technologies may be feasible–for example, getting all our nutrition from pills and injections–but they are not adopted because they violate other human needs and desires (for example, our love of eating).  Do you think there will really be a market for completely driverless cars?  Would you like one?  Or do you like to drive?

Robotic cars are great at monitoring other cars, and they’re getting better at noticing pedestrians, squirrels, and birds. The main challenge, though, is posed by the lightest, quietest, swerviest vehicles on the road.

Nuno Vasconcelos, a visual computing expert at the University of California, San Diego, says bikes pose a complex detection problem because they are relatively small, fast and heterogenous. “A car is basically a big block of stuff. A bicycle has much less mass and also there can be more variation in appearance — there are more shapes and colors and people hang stuff on them.”

That’s why the detection rate for cars has outstripped that for bicycles in recent years.

February 2, 2017 The anti-Trump "resistance"
Recent Comments
0 | Leave a Comment
Browse Our Archives
get the latest from
Cranach
Sign up for our newsletter
POPULAR AT PATHEOS Evangelical
1