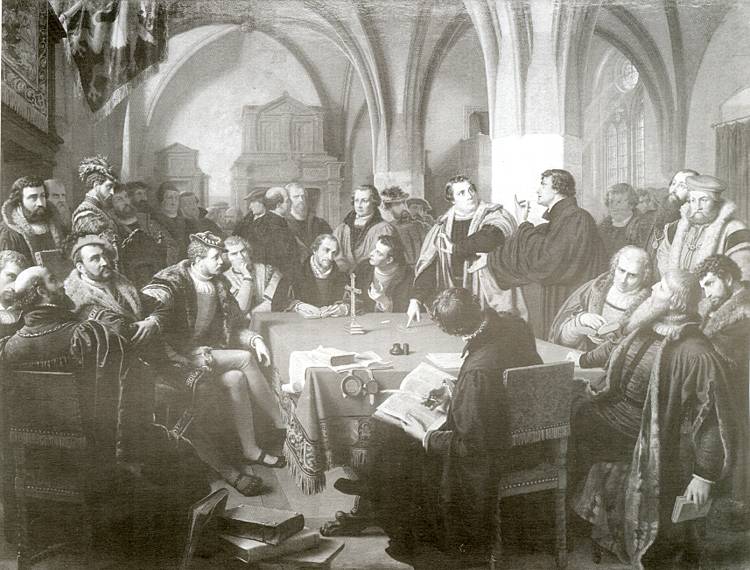 Did you know that a transcript survives of the Marburg Colloquy (1529), in which Luther and Zwingli debated the presence of Christ in the elements of Holy Communion?  Did you know that it is posted online?

This meeting, attended by virtually all of the major figures of the early Reformation, was an attempt to settle the Reformation’s sacramental teachings once and for all.  Phillip of Hesse organized the event in an attempt to unify the Reformation side in the face of imminent military threat from the Holy Roman Emperor.  But Luther would not water down his teaching for pragmatic reasons. With the Marburg Colloquy, the Lutherans and the Reformed went their separate ways, with most subsequent Protestants following, in effect, a non-sacramental approach to Christianity.

The transcript reads like a play, or a screenplay.  (Suggestion:  Somebody perform this!)  For all of its theological give and take, it has quite a few dramatic moments:  Luther writing “This is my body” in chalk on the table beneath a tablecloth, continually referring to it in the course of Zwingli’s rationalistic arguments.  Luther at more than one point saying, “I’m tired–Phillip [Melanchthon], you take over,” only to erupt at the next thing Zwingli says without letting Phillip get a word in edgewise.  The emotional moments on both sides.  The ending with its pleas for reconciliation and Luther’s devastating “we are not of the same spirit.”

Read the beginning after the jump and go to the link to read it all.  Notice the different approaches not just to the Sacrament but to the Bible and, above all, to Christology.

From AdHoc Image and Text Database on the History of Christianity (a project of Yale Divinity School):

It was six o’clock as Philip’s Chancellor Feige rose to open the colloquy.]

LUTHER: Noble prince, gracious lord! Undoubtedly the colloquy is well intentioned. Two years ago I rejected it because I knew that both sides had written enough and that no further arguments were left on either side. My mind was made up, and I wished it to remain so to the end of my days. I had no intention of writing anything further. But when my gracious prince and lord, Landgrave Philip, took up the matter at the Diet of Speyer, I then agreed: the pious wishes of the most excellent prince must be obeyed. Although I have no intention of changing my mind, which is firmly made up, I will nevertheless present the grounds of my belief and show where the others are in error.

I am happy to hold the colloquy. However, before we proceed to the Lord’s Supper, I must take notice of several things that apparently are proclaimed from the churches of Zurich, Basel, and Strassburg and that obviously are in error, assuming that they are represented correctly in their writings. In Strassburg, so I have read, several have said that Arius, if one still had his writings, was more accurate in his teaching about the Trinity than St. Augustine or other orthodox fathers. They have so differentiated between the two natures of Christ that they have nearly made two persons out of one. Yet they say [with Christ, in Jn 5:56]: “He who eats my flesh”

February 2, 2017 A problem with self-driving cars
Recent Comments
0 | Leave a Comment
"BTW, this link clarifies that the $600 figure is not quite the way you described ..."
reg An Unexamined Revolution
"I see what Jeremiah means. You don't have any reading comprehension abilities. I said "people", ..."
Rev_Aggie_98 Where We Are with COVID
"Suddenly you are a medical epidemiologist professional now. Wow."
Elind Where We Are with COVID
"You need to be more specific and list the vaccines that you have not taken ..."
Elind Where We Are with COVID
Browse Our Archives
get the latest updates from
Cranach
and the Patheos
Evangelical
Channel
POPULAR AT PATHEOS Evangelical
1