How Gorsuch’s nomination hearing is going 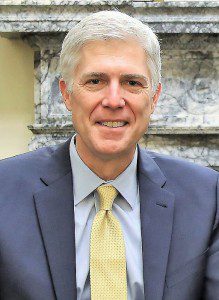 Neil Gorsuch is reportedly doing well in Senate hearings for his nomination to the Supreme Court.

In three days of marathon sessions lasting up to 10 hours,  Judge Gorsuch has been handling the hostile Democratic interrogations with aplomb.  He distanced himself from comments about him from the president, saying that he made no promises to repeal Roe v. Wade or any other rulings.  He sidestepped commentary on issues that he may have to rule on.

Republicans have 52 votes in the Senate.  Gorsuch needs 60 votes to shut off a potential filibuster.  Unless at least eight Democrats vote for the nominee, the Republican leadership is threatening “the nuclear option.”  That is, to change the Senate rules to eliminate the filibuster option.

One development that Democrats will jump on:  The Supreme Court just overturned one of Judge Gorsuch’s decisions.

There will be another day of testimony on Thursday.  The Senate Judiciary Committee will vote on April 3.  The goal is for the whole Senate to vote on the confirmation before the mid-April recess.  See this for more background.  (The Senate has the “advise and consent” responsibility for confirming Supreme Court justices, cabinet members, and other high government office.  The House of Representatives is not part of the picture.)

Neil Gorsuch fended off Democratic attacks, ducked specifics on hot-button topics and gently — yet unmistakably — distanced himself from President Donald Trump on Tuesday during his first round of questioning before the Senate Judiciary Committee.

Most notably, he didn’t seem to harm his prospects of getting confirmed, as he earned gushing praise from Republicans and Democrats didn’t draw much blood beyond Gorsuch’s repeated refusal to answer the stream of questions posed during the marathon, 10-plus hours of grilling.

As Supreme Court nominee Neil Gorsuch enters his second day of confirmation hearings in the Senate, his fate is dependent upon the support of Democratic senators who are embroiled in partisan fighting over the politics of the high court and a controversial president.

Democrats’ concerns could lead to an explosive fight on the Senate floor that would hold up his nomination and potentially force Republicans to enact the so-called “nuclear option,” a procedural move that would blow up Senate rules to pass President Donald Trump’s nominee.

Operating in a hyper-partisan era with an unpopular new president, Gorsuch’s judicial leanings will be one area of focus for Democrats, but hard feelings felt by Democrats over Republicans blocking the last Supreme Court nominee and Gorsuch’s independence from President Donald Trump are other areas of concern.

March 23, 2017 Trump and team WERE under government surveillance
Recent Comments
0 | Leave a Comment
Browse Our Archives
get the latest from
Cranach
Sign up for our newsletter
POPULAR AT PATHEOS Evangelical
1