The social implications of the Second Law of Thermodynamics 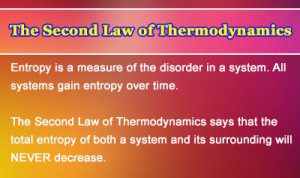 In discussing the debacle at the Oscars, government incompetence, political surprises, and unintended cultural consequences, Jonah Goldberg invokes the Second Law of Thermodynamics.  This is the principle in physics that closed systems will increase in entropy (become less ordered) unless energy is introduced to maintain the order.  (A lay definition by me, a layman.  Feel free to explain it better.)

Goldberg applies this to social systems as well.  I suspect this is more of a figure of speech than an actual application of physics.  (Again, those of you who know, weigh in.)

But his point seems to hold true:  Our political system needs our continual input of energy to keep it going, otherwise, it will degenerate.  Societies, cultures, and institutions need the continual effort of their members to keep them from descending into chaos.  By extension, we could observe that marriages need continual work to keep them strong.  So do churches.

What other applications do you see?

From Jonah Goldberg, Can a Scientific Law Explain the Oscar-night Debacle?:

Steven Pinker recently wrote a wonderful little essay (for edge.org) on how people need to better appreciate the second law. Specifically, they need to understand that if we don’t actively work to keep chaos at bay, entropy wins. “Closed systems inexorably become less structured, less organized, less able to accomplish interesting and useful outcomes, until they slide into an equilibrium of gray, tepid, homogeneous monotony and stay there,” Pinker writes.

“The Second Law of Thermodynamics,” he adds, “is acknowledged in everyday life” whenever we say things like “Ashes to ashes,” “Things fall apart” or “Rust never sleeps.”

Complicated things are … complicated. If you don’t work hard at keeping them running, the natural order of the universe is for them to break down. Planes don’t “want” to fly, bikes don’t “want” to stay upright, and people, markets and institutions don’t always “want” to behave the way experts in Washington want or expect them to.

Pinker’s essay is here.  He applies the Second Law to things like psychology, poverty, and the alleged meaninglessness of life.

Is he taking this too far?  Note that he doesn’t apply it to the credibility of evolution or to the liberal notion of progress.

March 13, 2017
The difference between Mike Pence's e-mails and Hillary Clinton's
Next Post

March 13, 2017 LCMS judge is censured for following her church
Recent Comments
0 | Leave a Comment
Browse Our Archives
Follow Us!