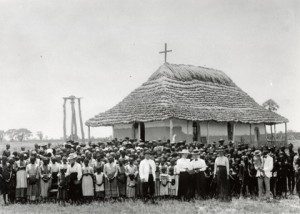 Imagine that the Lutheran Church Missouri Synod suddenly went liberal.  Pastors of every gender and sexual identity, seminaries that ignored the Bible, the gospel replaced by leftwing politics–the whole way.  Also imagine that there were no other church bodies that you could go to instead–no Wisconsin Synod, no Evangelical Lutheran Synod, and, even though this might not be an option for you, hardly any Catholics, Orthodox, Reformed, or Baptists.

There were still some faithful pastors and congregations, carrying on with great courage despite an often hostile church bureaucracy.  But there aren’t any of these near where you live.

The Synod’s Recognized Service Organizations (RSOs), however, are still faithful and confessional.  These RSOs have been officially authorized by the church body to carry out specialized ministries.  They have the right to call pastors.

So these RSOs start holding worship services.  The pastors preside at the Divine Service and offer the Sacraments.  Though you keep your membership in your old congregation with its feminist pastor, you stop attending there on Sunday mornings and instead drive thirty miles each Sunday afternoon to worship with your fellow area conservatives at the offices of the Lutheran Heritage Foundation.

This is basically the situation of confessional Lutherans in Finland.

The state church in Finland has undergone five distinct “revivals” over the last two hundred years, including one in the 1960’s.  These originally were sparked by various Pietist movements, but they involved individual Christians cultivating a personal faith in Christ, accompanied by a new zeal to live out their faith.  In Finland, the national church supported these Christian renewal movements and, for all of their Pietism, they kept their Lutheran theology and identity.

But in Finland and also in the other Scandinavian countries, these groups formed their own organizations, emphasizing mostly evangelism and world missions.  The national churches subsequently turned over mission work to these “Mission” organizations.  Some were devoted to “outer missions” and sent hundreds of missionaries throughout the world.  The Scandinavian missionaries were very effective.  That there are so many Lutherans in Africa, for example, is largely due to their efforts.  Some were devoted to “inner missions.”  The state churches turned over to these organizations the responsibility for youth work, Sunday School-type teaching of young children, elderly care, and social ministries such as service to the poor.  Finland doesn’t seem to have the “inner/outer” mission distinction that I saw in Denmark, but instead there are five distinctly Lutheran mission groups that carry on these kinds of work.

And now they are also providing Word and Sacrament ministry.

But can that be valid?  This is outside the church!  Don’t you need a church hierarchy to authorize this sort of thing?  Aren’t they competing with the parish churches?  Doesn’t the church need real congregations?

Well, they have called and ordained pastors.  They are, in effect, Recognized Service Organizations.  They have an authorization from the parent church body.

Their situation is much like that of the original immigrants who founded the Lutheran Church Missouri Synod.  They no longer had bishops.  They were cut off from the German church.

But Walther and the others determined, on the basis of Scripture and the Lutheran confessions, that the church was where the Word of God is preached in its purity and the Sacraments administered according to Christ’s institution.

So though their worship services were, by some standards, unofficial, they were still valid.  And those who attend these services form a de facto congregation.  And they co-operate with other confessional congregations and pastors where they find them, including in the state church.

It gets even more complicated.  The leader of the “Lutheran Mission Diocese,” a network of confessional congregations, as opposed to an organization of individuals, was recently expelled from the ministry of the national church.  He refused to commune his bishop.  (See, even these loosely organized entities can practiced closed communion.)  So now these congregations have broken away from the national church and have become an independent church body.  (They are starting negotiations with the Lutheran Church of Canada and pursuing membership in the conservative International Lutheran Council.  Eventually, they hope to form pulpit and altar fellowship with the LCMS.)

That kind of entity we American Lutherans can understand.  In the meantime, there are lots of extremely devout, committed, and theologically zealous Christians in this supposedly secularist society.  And they are working for a sixth revival.