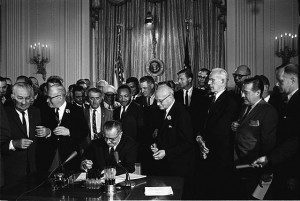 Title VII of the 1964 Civil Rights law bans discrimination on the basis of race, color, national origin, religion, and sex.  The 7th Circuit federal appeals court ruled that the category of “sex” includes sexual orientation.  This would mean that any kind of discrimination against LGBT folks is illegal.

The ruling only applied to the 7th Circuit Court’s jurisdiction:  Illinois, Indiana, and Wisconsin.  That restriction isn’t made clear in all of the news reports I have read. But it sets up the issue for resolution by the Supreme Court.

Traditional thinking considers homosexuality in moral terms, rather than as an “identity.”  This ruling, if upheld, would bring the law down on the side of “identity,” something the culture has seemingly already done.

Where does that leave the moral traditionalists, including most conservative Christians?  (My discussion continues, with a report on the ruling, after the jump.)

The Civil Rights Law also forbids discrimination against “religion.”  So how will that play out?

Already acting on religious convictions about sexual orientation–as with Christian wedding photographers and cake-bakers–are running afoul of both the new cultural norms and existing anti-discrimination laws.  Bringing LGBT folks under the Civil Rights Law would strengthen and extend their protection and make it apply nation-wide.

Will churches be allowed to refuse to hire a gay organist?  Churches, maybe, but what about other religious institutions?  Will a Christian school be able to fire a gay teacher?  What about Christian individuals?  I suspect Christian bakers and photographers will have to take part in gay weddings.  Where else might this become an issue?

And yet, there are probably many cases that Christians could agree on that gay people should be protected against discrimination.  LGBT people shouldn’t lose their jobs, should they?  All Americans, including LGBTs,  have their inalienable rights under the Constitution.  Isn’t that what the Civil Rights law is all about, or does it do something different?
From Richard Wolf, Federal appeals court: Civil rights law covers LGBT workplace bias, USA Today:

The 8-3 decision by the full U.S. Court of Appeals for the 7th Circuit, which overturned a three-judge panel’s ruling, represents another step in the effort by gay rights groups to extend their 2015 nationwide victory on same-sex marriage to other areas, including employment.

While the 7th Circuit has jurisdiction only over Illinois, Indiana and Wisconsin, the court’s ruling is sure to be hailed by gay rights groups as an important step in the national effort to protect the LGBT community from discrimination in employment, housing and public accommodations.

April 6, 2017
The Trump campaign surveillance and unmasking
Next Post