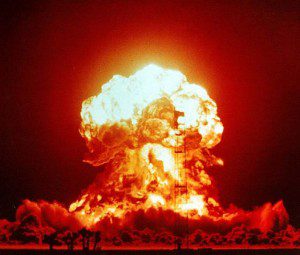 Now the Senate cannot block any presidential appointments.  But the Democrats can feel good about themselves.  (“Take that, Republicans!  I guess we showed you, Donald Trump!”)  Even though the gesture significantly weakens their power in the Senate.

UPDATE:  The Senate has confirmed Judge Gorsuch for the Supreme Court.

Senators voted on Thursday to advance Judge Neil Gorsuch’s nomination to serve on the U.S. Supreme Court, setting up a final confirmation vote on Friday.

By a vote of to 55 to 45, all Republicans and three Democrats voted to proceed to final debate on the nomination of Gorsuch, 49, a Denver-based judge on the U.S. Court of Appeals for the 10th Circuit. If confirmed, Gorsuch would replace the late Supreme Court justice Antonin Scalia, who died unexpectedly last year, sparking a more than year-long feud among senators about the future makeup of the high court.

Gorsuch’s nomination advanced shortly after Republicans successfully voted to approve what is known as the “nuclear option,” changing Senate rules to allow the confirmation of Gorsuch and all other Supreme Court nominees by a simple-majority vote.

The long-anticipated change came after Democrats earlier blocked attempts to advance Gorsuch’s nomination. The change now means that all presidential nominees for executive branch positions and federal courts need only a simple-majority vote to be confirmed by senators.