Eating, sacrifice, and the Gospel 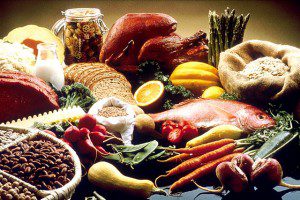 When a thale cress plant is being eaten by a caterpillar, it responds by sending out mustard oil, which is toxic to caterpillars.  Other stimuli doesn’t trigger this reaction.  Somehow the plant knows when it is being eaten.

Read about the research and watch a video about it after the jump.  One of the scientists who discovered this effect observes that plants have “behavior” just like animals do.  And they must have, in some sense, a kind of awareness.

Which speaks to us about the Gospel.  And Maundy Thursday.  As I have pointed out before, there can be no life without sacrifice of another life.  Another living being must die in order for us to live.  We call this eating.

We cannot be nourished by inorganic chemicals, minerals, rocks, or other objects.  We have to eat other living things.  It doesn’t matter whether we eat an animal or a plant.  A plant is just as alive as an animal is.  Even “fruititarians,” who will not destroy whole plants, are eating the living cells of their fruit.  No one can escape the reality that our life is sustained by death.  Or, rather, that death allows us to live.  And that life comes from death.

What is true in nature is a sign of what is supremely true spiritually.  Our spiritual life depends on God the Son’s self-sacrifice for us.  If we refuse His death for us, we die spiritually.  But His death gives us life and continues to nourish us.  Eventually, we will die physically, but, as with another natural sign that we see in plants, life comes from death.  We will be raised, just as Christ was raised.

And to sustain us with His sacrifice, on the night that He was betrayed,

Jesus took bread, and after blessing it broke it and gave it to the disciples, and said, “Take, eat; this is my body.”  And he took a cup, and when he had given thanks he gave it to them, saying, “Drink of it, all of you, for this is my blood of the  covenant, which is poured out for many for the forgiveness of sins. (Matthew 26:26-28)

From Colin Payne, Plants Know They Are Being Eaten – Business Insider:

Vegetarians and vegans pay heed: New research shows plants know when they’re being eaten. And they don’t like it.

That plants possess an intelligence is not new knowledge, but according to Modern Farmer, a new study from the University of Missouri shows plants can sense when they are being eaten and send out defense mechanisms to try to stop it from happening.

The study was carried out on thale cress, or Arabidopsis as it’s known scientifically, which is closely related to broccoli, kale, mustard greens, and other siblings of the brassica family and is popular for science experiments. It is commonly used in experiments because it was the first plant to have its genome sequenced, and scientists are intimately familiar with how it works.

Going forward with the question of whether a plant knows it’s being eaten, the University of Missouri researchers first took a precise audio recording of the vibrations a caterpillar makes as it eats the thale cress leaves, with the working theory that plants could feel or hear the vibrations in some way.

The researchers controlled the experiment by coming up with other vibrations that simulated other natural vibrations like wind noise that the plant might encounter.

The results? According to Modern Farmer, the thale cress produces mustard oils that are mildly toxic when eaten and sends them throughout its leaves to try to keep the predators away. The research also revealed that when the plants felt or heard “munching vibrations” from the caterpillar, they sent out extra mustard oils. But the plants didn’t react when other vibrations were present.

April 14, 2017 States can now stop funding Planned Parenthood
Recent Comments
0 | Leave a Comment
"If you're unfamiliar with the meme of calling (white) women "Karen", you clearly have not ..."
tODD Memory
"Motive-judging will always, ultimately, bite you in your own tuckus. FWIW."
tODD Memory
"I'm clearly late to this conversation, and missing at least some context at this point, ..."
tODD Memory
"God does not give the Holy Spirit to “those who ask Him.” He gives the ..."
Santiago Matamoros A New Bible Translation (by Lutherans)
Browse Our Archives
Follow Us!

Keep Your Eyes on the Prize: Discipline, Endurance,...
I’ve been reflecting on 2 Timothy 2:3–7: Join with me in suffering, like a...
view all Evangelical blogs
What Are Your Thoughts?leave a comment
Copyright 2008-2020, Patheos. All rights reserved.