Why the Russians are backing Assad 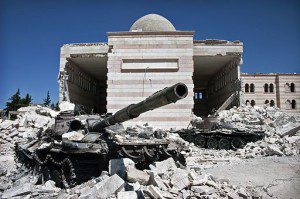 Secretary of State Rex Tillerson, who is in Moscow for negotiations, has said that Russia needs to choose between Syrian dictator Bashar Al-Assad and the United States.
One would think that Vladimir Putin would rather have good relations with the United States than Syria.  And what’s in it for Russia to help with the bombing of hospitals and other atrocities?John Hopkins International Affairs expert Vali Nasr explains Russia’s ties to Syria and to Assad, after the jump.
From Vali Nasr,  Why the Russians Aren’t Likely to Break With Assad – The Atlantic:

Russia’s interests in Syria predate even the Soviet Union. The Russian Orthodox Church has close ties to its sister Syrian Orthodox Church; some of the czars’ crowns were said to have been made of Damascene steel. Strategic ties forged during the Soviet era persist to this day. Russia continues to enjoy access to the eastern Mediterranean using the Syrian naval base in Tartus.

Strengthening Putin’s ties to Assad is their shared concern with containing Islamic extremism in the Arab world and Afghanistan, lest it spread to Russia’s Muslim regions and periphery. Syria has become ground zero for Putin’s containment strategy, and Russians are quick to point to the large number of Chechen jihadis fighting there to make their case. Putin, however, sees the Assad regime as a bulwark against extremism, and has embraced a strategy for defeating extremism that starts with keeping Assad in power. Hence, Putin sees Assad’s opposition, and the Islamic State, as the immediate obstacles to his containment strategy. And, further: As long as the largely Sunni jihadis are waging war on Assad, the threat they pose to the Russian homeland is diminished.This common cause against the Sunnis has allowed Iran and Russia to forge deep military and intelligence ties. Over the past five years, Iran has, in turn, created a formidable integrated force, consisting of Shia militias and fighters, from Lebanon’s Hezbollah, to volunteers from across the Arab world, to Pakistan and Afghanistan, all trained and under the command and control of Iran’s Revolutionary Guards. This is a regional strategic asset of material value to Putin.

Defending Assad is about more than just the future of Syria: It is also about using this Shia force to serve Russia’s broader interests in the Middle East. It is for this reason that Turkey or the Arab states supporting the opposition have found it so difficult to wean Moscow off Tehran.

April 12, 2017 The connection between Martin Luther and Martin Luther King
Recent Comments
0 | Leave a Comment
Browse Our Archives
Follow Us!