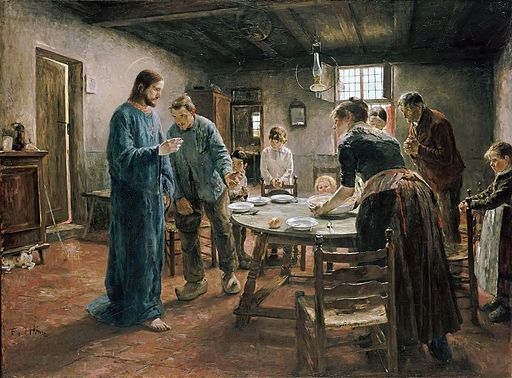 In researching yesterday’s post on Saying Grace, I came across this painting.  I said to myself, that’s the Lutheran table prayer!

Come, Lord Jesus, be our guest

And let these gifts to us be blest.  Amen

I used to look down on this prayer, when I first became a Lutheran, because it sounded just like a children’s prayer.  I do prefer Luther’s Table Prayer given in the Catechism:

The eyes of all look to you, O Lord, and you give them their food at the proper time

Lord God, Heavenly Father, bless us and these your gifts,

Which we receive from your bountiful goodness.

Through Jesus Christ, our Lord, Amen.

But I’ve come to appreciate the Common Table Prayer.  It draws on a powerful Lutheran teaching:  Christ’s presence.

Lutheranism is a theology of presence, and this is at the heart of Lutheran Christology:  Christ’s real presence in the Sacrament, yes; but also His omnipresence thanks to the communication of attributes with the Father, so that He is present in the Divine Service, in the world, in vocation, and, yes, with families when they sit down together in His name for a meal.

I had never heard of the artist, Fritz von Uhde (1848-1911).  It turns out that he was a well-regarded German artist and a devout Lutheran.  A pioneer of the realistic style, von Uhde did many works with Christian themes, rendering Biblical scenes with realistic contemporary characters and picturing Christ appearing to common, ordinary folks, including the lower classes and the poor.

This painting, at the Berlin National Gallery, is called “Come, Lord Jesus, Be Our Guest.”  This and his other works in this vein (which I think I’ll also blog about)  was criticized by Roman Catholic critics for lacking reverence.  But he is simply portraying the Lutheran theology of Christ’s presence!

After the jump, read what his Wikipedia article says about him.From “Fritz von Uhde,” Wikipedia:

His early work consisted of landscapes and battle pieces, but Uhde’s inclination was later almost solely directed towards genre art and religious subjects. His father had been the President of the Lutheran Church Council in Wolkenburg, Saxony, and Uhde shared his father’s Christian commitment.[13][14]

Although the social realism of Uhde’s work was often criticized as vulgar or ugly, his paintings also attracted the admiration of others. His work was well known by the French public.[15]Vincent van Gogh mentioned Uhde in personal correspondence.[16] The critic Otto Julius Bierbaum, who prepared a biographical writing of him, said “as a painter of children … Uhde is extraordinarily distinguished. He does not depict them … as amusing or charming dolls, but with extreme, very strict naturalness.”[8] Revivalist of the practice of treating Biblical episodes realistically by transferring them to modern days, Uhde’s work was also appreciated by others who praised his symbolic message and sense of evangelical morality.[17]

In his work, Uhde often depicted the ordinary lives of families of peasants, fishermen, and sewers; children and youngsters, as well as young and old women. He chose both indoor and outdoor settings, with detailed and ordinary surroundings, and often natural colorful landscapes. In addition, he frequently depicted Jesus Christ as visiting common people, poor people and working class or proletarian families in settings of his country.[14] Like Adolf Hölzel and Ludwig Dill, he painted rural life and his work has been described as “rustic naturalism“.[18]

One of his well-known paintings was Come, Lord Jesus, be our Guest (Komm, Herr Jesus, sei unser Gast), of the Berlin National Gallery, where Christ appears among the peasant family assembled for their meal in a modern German farmhouse “parlor”. This work was especially criticized by some Catholics who saw it as a “desecration” of Christ,[19] whereas R. A. Cram wrote that by painting “Christ among the common people here and now” Uhde had “built up a most significant art.”[20] The religious content has been seen as “a vehicle for his quest to endow his work with deeper meaning”.[21] According to the art historian Bettina Brand, Uhde’s work was controversial partly because “setting episodes from the Gospels in the context of contemporary poverty … suggested that the Christian demand of equality for all men had not been met politically or socially.”[2] Besides this, his religious paintings “seemed to document the cultural and ethical progressiveness of Protestantism against the clericalism of the Catholic Church.”[22] 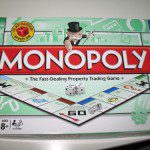 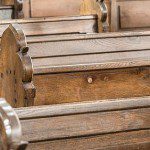 How Will the Pro-Life Movement Address Women’s Rights...
One of the reasons that the conversation about abortion is so polarizing...
view all Evangelical blogs
What Are Your Thoughts?leave a comment
Copyright 2008-2021, Patheos. All rights reserved.