An orthodox Jewish school for girls in London may be closed down for refusing to teach its students about homosexuality and gender reassignment.

The private school has pupils ranging from 3 years old to 8.

In the UK, all schools, including private religious institutions, must adhere to the Equality Act of 2010, or they can be closed.

The Vishnitz Girls School has defied the agency enforcing the requirement three times.  The agency says that the school’s insistence on abiding by the teachings of the Torah (and presumably its position that its students are too young for such topics) place the school in violation of “fundamental British values.”  Refusing to teach the young children about homosexuality and transgenderism “restricts pupils’ spiritual, moral, social and cultural development.”

This is happening in a “free country.”  Could it someday happen in ours?

I wonder how Christian schools in the UK are responding to this requirement.  Does anyone know?From Jewish Elementary School Faces Closure for Not Teaching Kids About Gender Reassignment | Heat Street:

A private school for Orthodox Jewish girls aged three to eight faces closure because pupils are not taught about homosexuality or gender reassignment.

The Vishnitz Girls School, in north London, does not give pupils “a full understanding of fundamental British values” according to a report by the Office for Standards in Education, Children’s Services and Schools (Ofsted).

The report claimed girls “are not taught explicitly about issues such as sexual orientation. This restricts pupils’ spiritual, moral, social and cultural development and does not promote equality of opportunity in ways that take account of differing lifestyles.”

As a result of its defiant stance in refusing to bow to state pressure, the school failed its Ofsted inspection for the third time since February 2016.

The report added that school leaders “recognise the requirement to teach about the protected characteristics as set out in the Equality Act 2010. However, they acknowledge that they do not teach pupils about all the protected characteristics, particularly those relating to gender re-assignment and sexual orientation. This means that pupils have a limited understanding of the different lifestyles and partnerships that individuals may choose in present-day society.” 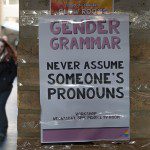 July 10, 2017 "What are your preferred pronouns?"
Recent Comments
0 | Leave a Comment
Browse Our Archives
get the latest from
Cranach
Sign up for our newsletter
POPULAR AT PATHEOS Evangelical
1

How I Tried on Liberal Christianity...
Roger E. Olson
Books by This Author Books by Gene Veith