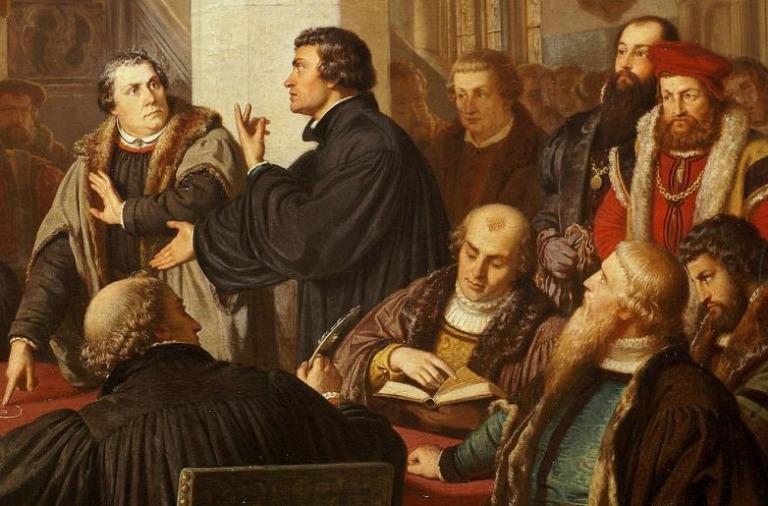 Phillip Cary, a theology professor at Eastern University, an American Baptist institution, has written a Reformation anniversary piece in First Things that makes those points.  Cary, who describes himself as a “high-church Anglican” goes so far as to say that Luther challenges Protestantism more than he does Catholicism.

Most non-Lutherans writing about Luther, in my experience, don’t quite “get” him. Cary, on the other hand, understands Luther quite well, though not perfectly.  I was struck by Cary’s explanations of Luther’s teachings about the sacraments.  He sees the connection Lutherans make between Baptism and the Lord’s Supper with justification by faith in Christ and the theology of the Word of God.

From  Luther at 500 by Phillip Cary | Articles | First Things:

Protestants love to talk about “accepting Christ by faith,” which certainly owes a great deal to this fundamental teaching of Luther’s. Usually, however, it is presented as a decision we must make, as if it were by our own free will. Luther, by contrast, hates the very idea of free will when it is applied to matters of salvation, for our confidence in our own free will lies at the core of our efforts to be justified by good works rather than faith alone. The great pastoral aim of Luther’s doctrine of justification is to free us from the kind of performance anxiety that arises whenever our salvation depends in any way on us, our hearts, our will, or our doings. For anything we do is something about which we can ask, “Am I doing it well enough?” And for Luther the answer is always “not well enough to save you from damnation.” No act of our free will, and hence no decision of ours, is an exception to this rule. . . .

God has already promised these things to us in his word, and he has bestowed them on everyone who is baptized by addressing each one of us in the second person singular, saying “I baptize you in the name of the Father, the Son, and the Holy Spirit.” Here “I” really means Christ, who speaks through the mouth of the minister, and “you” means me in particular—whoever is addressed in the particular utterance of this sacramental word at a particular time and place. So to think I must make a decision about whether I belong to God, Father, Son, and Holy Spirit, is to doubt God’s word given to me in baptism, and in effect to call God a liar. . . .

Unbelief thus remains a perpetual problem in the Christian life, and it is important for us to feel our helplessness as we are assaulted by a host of temptations not to believe, which Luther famously calls Anfechtungen or “assaults,” and regards as an essential experience of the Christian life. We would be fools to fight these assaults by trusting in our own free will or ability to believe. For Luther, we must believe that we are Christians because Christ said so in our baptism, not because we have made a decision or had a conversion experience or done something to make ourselves into believers. If asked whether we are truly Christians, the answer Luther teaches us to give is simply “Yes, I am baptized.”. . .

When Luther teaches justification by faith alone, he is not requiring us to put faith in faith. On the contrary, he wants us putting faith in the Gospel alone. Any account of faith that focuses on the experience of faith—any theological turn to subjectivity, such as in liberal theology—has missed Luther’s point. What we experience, for the most part, is our own sin and unbelief. Faith means turning away from our experience to take hold of Christ alone by believing, against all doubt and temptation, that what the Gospel tells us about Christ given for us is really true.

Justification by faith alone is thus justification by Christ alone. This has everything to do with hearing the Gospel spoken aloud in external words, through which Christ claims each of us by saying “you” in a way that includes me. When I hear “This is my body, given for you,” spoken in the proper liturgical setting, it is sheer unbelief to deny that Christ is mine. Conversely, it is only by believing in such a word addressed to me that I know that I am a Christian, that I have a savior, that I am an heir of eternal life—not because I know I believe (frankly, this is not something I know) but because I know Christ does not lie.

Read Cary’s whole essay, which also discusses what Catholics need to learn from Luther.  If Protestants need to recover the Sacraments and an understanding of faith that excludes our works, he says, Catholics need to move from their metaphysical approach to God to a reliance on God’s Word.

But there are a few things that, I think, Cary gets wrong, as does the “Catholic” approach to Luther that he exemplifies.  I don’t agree that the Joint Declaration on Justification made by the Vatican and liberal Lutherans shows a fundamental agreement on justification by faith.  It is not an agreement just because two sides can use the same words, when each side means something different by them.  Nor am I convinced by the “Finnish school” of Luther research, which shows similarities between Lutheranism and Eastern Orthodoxy.  Cary is right to emphasize Luther’s notions of “the righteousness of God” and “union with Christ”–the Christian’s connection to Christ through faith, the Word, and the Sacraments is real–but I don’t think this is the same as theosis.

Still, I appreciate Cary’s insight that both the Catholic and the Protestant camps would do well to learn from Luther, who offers a theology wide and rich enough to encompass and to challenge them both.  (This, by the way, is something we develop in our new book.)

As Cary says, “Half a millennium after the ninety-five theses, Christians outside Protestantism [as well as inside Protestantism] may begin to receive Luther’s challenges as a gift, presenting a piety of the Word of God that enriches the whole Christian tradition. ”

Illustration:  Luther at the Marburg Colloquy (Debating Zwingi over the Presence of Christ in the Lord’s Supper) by Christian Karl August Noack [Public domain or CC BY-SA 2.0 (https://creativecommons.org/licenses/by-sa/2.0)], via Wikimedia Commons 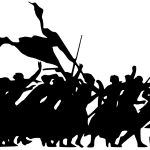 October 16, 2017
Why Leftists Are Now Silencing Liberals
Next Post 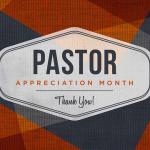