Communal Reading in the Ancient World & the Early Church

Communal Reading in the Ancient World & the Early Church May 31, 2018 Gene Veith 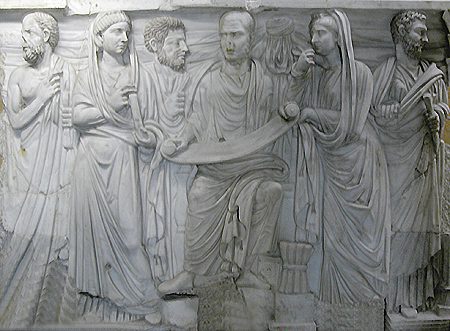 In the ancient world, people read out loud, even when they were by themselves.  Thus, Stephen could overhear the Ethiopian eunuch reading The Book of Isaiah as he drove by in his chariot.  Not only that, as new research shows, people also read out loud to each other.

In his book Communal Reading in the Time of Jesus: A Window into Early Christian Reading Practices, Brian J. Wright shows that people were reading to each other all the time–at home, in the marketplace, in the taverns, in the public baths, whenever friends got together, whenever strangers got together.  Prof. Wright quotes bystanders complaining about the racket!

Not everyone could read–though perhaps more than has been realized–but even those who were illiterate had access to books, which had been read to them.  And they internalized what they had heard.  Prof. Wright cites examples of individuals catching mistakes, noting differences with what the listeners had heard before.

Communal reading was thus the television, the movies, and the internet of the time!

The communal reading would have included the works of Homer, the speeches of Cicero, the satirical poets, the Greek and Roman historians, the accounts of Caesar’s conquests.  And it would have also included the epistles of St. Paul and the Gospels of Matthew, Mark, Luke, and John.

This must have been a key factor in the spread of Christianity.  People were likely evangelized not so much by “witnessing,” as we think of it today, but by actually hearing texts of Scripture being read aloud.  And, as we are told in those Scriptures, “faith comes from hearing, and hearing through the word of Christ” (Romans 10:17).

Hearing.  The Word of God is an oral communication, meant to be heard.

Such communal reading, of course, is also the context for the public, oral reading of the Bible as a central part of Christian worship.  This liturgical reading of Scripture is accompanied by preaching, in which the pastor explains, discusses, and applies what was read.

I suspect something similar happened informally in the communal readings, with the reader reflecting upon the text and the group talking about what had been read.

Read the interview with Brian Wright in Christianity Today.

Not until around 400 A.D. do we find the first mention of someone reading silently, with St. Augustine marveling in his Confessions that his mentor St. Ambrose had this power.  (“When he read, his eyes travelled across the page and his heart sought out the sense, but voice and tongue were silent.” [Book VI. Chapter 3])  But always reading out loud persisted for most people as late as the 10th century.  (See this history of reading.)

Do you think something was lost–or at least changed–once reading became primarily a private, interior activity?

Do you think we might bring back communal reading?  Some families read books out loud, primarily for the benefit of young children, but everyone seems to enjoy it.  I remember in primary school having teachers who read books to the class–particularly, the whole Little House on the Prairie saga–and I still remember how vivid the story became, even more so than when I later read the books to myself.  Many good Bible studies consist of just taking turns reading the text aloud, then talking about it.

What about reading out loud to yourself?  I have heard that this can be a powerful way to read the Bible, preventing getting lost and distracted in the interior musings of one’s mind. 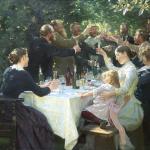 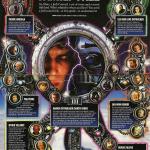 June 1, 2018 Star Wars Sex
Recent Comments
0 | Leave a Comment
Browse Our Archives
get the latest from
Cranach
Sign up for our newsletter
POPULAR AT PATHEOS Evangelical
1