Marxists on Bernie Sanders and the Revolution

Marxists on Bernie Sanders and the Revolution February 27, 2020 Gene Veith 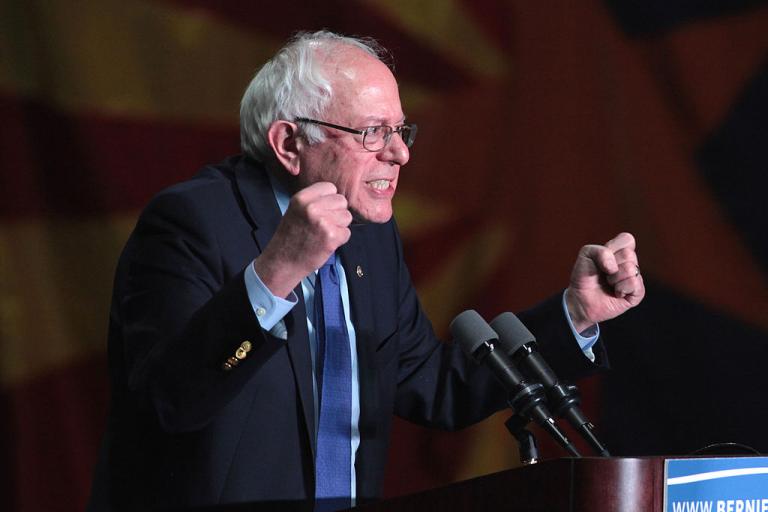 Since Bernie Sanders is now the undisputed front-runner for the Democratic presidential nomination, we need to take his ideology seriously.  A good place to start would be an article by  two American Marxists who  explain how the election of Sanders to the presidency would help lead to the overthrow of the capitalist order and its replacement with a socialist society.

Understanding their argument requires some background and review:  Marxists call for the working class (people who get paid a salary) to overthrow the middle class (the owners of the companies). Capitalism, which previously overthrew the upper class (the hereditary nobility of feudalism), is the economic system that creates this modern class distinction. But Capitalism is accompanied by ideas and institutions, which make the worker-exploiting  economic system possible and which must also be overthrown.  These include private property, individualism, personal rights, and religion.  The new post-revolutionary socialist order, on the other hand, will feature communal ownership, collectivism, social obligations, and materialism.

Both Soviet-style Communists and Democratic Socialists are Marxists who share these revolutionary goals.  But they differ on how to achieve them.  Communists believe the middle class can only be overthrown and the Capitalist order destroyed by violence and bloodshed.  Democratic Socialists believe the revolution can be brought on by political means–voting, passing laws, electing leaders.

Jacobin Magazine is named after the Jacobins of the French Revolution, the party that initiated the Reign of Terror.  Editor Micah Uetricht and writer Meagan Day are both Democratic Socialists, as is Bernie Sanders.  They have written a book, to be released on April 28, entitled Bigger Than Bernie: How We Go from the Sanders Campaign to Democratic Socialism.

An article drawn from that book has been published by Salon, the progressive mainstream online magazine, entitled Why Bernie Sanders is just the beginning of an American turn to the left.

Uetricht and Day make the case for what they call the “democratic road to socialism,” while also arguing that the political and the revolutionary tactics are not necessarily incompatible.

The Jacobins point out that Americans, however exploited they may be, have a residual respect for the legal and political system and share its values, which makes it unlikely that they would take part in a Soviet-style violence-in-the-streets kind of revolution.  (I would add that the success of American Capitalism has given most “workers” the prosperity associated with the middle class–to the point that most salaried folks consider themselves middle class.  Furthermore, members of America’s actual working class tend to own property–homes, cars, etc.–and even, through Wall Street and their retirement programs, a share in the “means of production” of major companies.)

But the election of Bernie Sanders is helping to create a constituency for Democratic Socialism.  And when as President he starts to implement his reforms of the American economy, government, and society, this will create an even bigger constituency.

Whereupon the Capitalists will strike back.  The ruling class will attempt to block and roll back the reforms, using force to do so.

At that point, the masses will rise up to defend themselves, taking to the streets in a genuine revolution to overthrow Capitalism once and for all and building on its rubble the new Socialist order, the utopian society of all Marxists’ dreams.

Don’t believe me?  Read Uetricht and Day’s article for yourselves.  Here are some excerpts:

A country like the United States has both a well-developed capitalist state, beholden to the capitalist class and armed to the teeth, and mechanisms for democratic participation in that state that allow people to exercise some measure of control over their representatives. Even though their choices are limited, their representatives are bought off by the rich, and the capitalist class holds the entire system hostage with the threat of devastating economic retaliation if things don’t go their way, the system does have some basic democratic elements that its citizens largely affirm and occasionally participate in.

This is a tricky situation to navigate. If the democratic capitalist state were less developed, it might be possible to convince people to simply storm the gates, tear up the old rules, and start fresh in a socialist society. This is what socialists tried to do in Russia in 1917: the state was weak and after centuries of autocratic rule it didn’t have much legitimacy in the eyes of most Russians, so revolutionaries could get popular support for scrapping it and starting over. . . .

We achieve success in the electoral sphere when we’ve won over masses of people to our political agenda. Elections can be used to build mass working-class movements, and the project of wielding state power can be used to clear the path for those movements as they confront their class enemies. . . .

Eventually, after the Left has won significant gains at the ballot box and in civil society, the capitalist class will take the gloves off against socialists and do whatever it takes to destroy our movement. We’ll need to fight back. The democratic road to socialism seeks not to elide this confrontation, but to make it possible. To replace capitalism with socialism, writes [Eric] Blanc, “(a) socialists should fight to win a socialist universal suffrage electoral majority in government/parliament and (b) socialists must expect that serious anti-capitalist change will necessarily require extra-parliamentary mass action like a general strike and a revolution to defeat the inevitable sabotage and resistance of the ruling class.”

One might say that this is all a radical revolutionary pipe-dream, that Sanders could be a progressive president without all of this actually happening.  But these fellow Democratic Socialists demonstrate the ideological atmosphere that Sanders has been breathing in for decades.  At the very least, an awareness of Marxism can help us to understand what Sanders means and the ultimate aims of his policies.  Otherwise, we will interpret them in conventional terms.

For example, the other Democratic candidates are attacking Sanders for his past support of gun ownership and Second Amendment rights.  Those candidates do not perhaps realize that those attacks might make Sanders more attractive to many Americans.

But why would a Marxist–as opposed to a conservative–be in favor of gun ownership?  If you look forward to a time when the masses will rise up in a revolution, of course you will want them to have firearms.  Read, for example, the article in Jacobin Magazine, What a Socialist Approach to Gun Control Should Look Like,  which argues for restrictions on gun-related businesses while appreciating “that oppressed and colonized people need the right to arm themselves.”

Sanders, now that he is running as a Democrat, now draws back from his earlier support for gun rights.  The point is, in assessing a candidate, voters need to attend not just to what the candidate promises, but also to the larger constellation of what the candidate means by those promises and how they fit together into a larger worldview.

February 26, 2020
Escaping the World vs. Escaping Yourself
Next Post

February 28, 2020 Why the West Lost Its Nerve
Recent Comments
0 | Leave a Comment
Browse Our Archives
get the latest from
Cranach
Sign up for our newsletter
POPULAR AT PATHEOS Evangelical
1

Can You Be a Baptist and...
Roger E. Olson
Books by This Author Books by Gene Veith