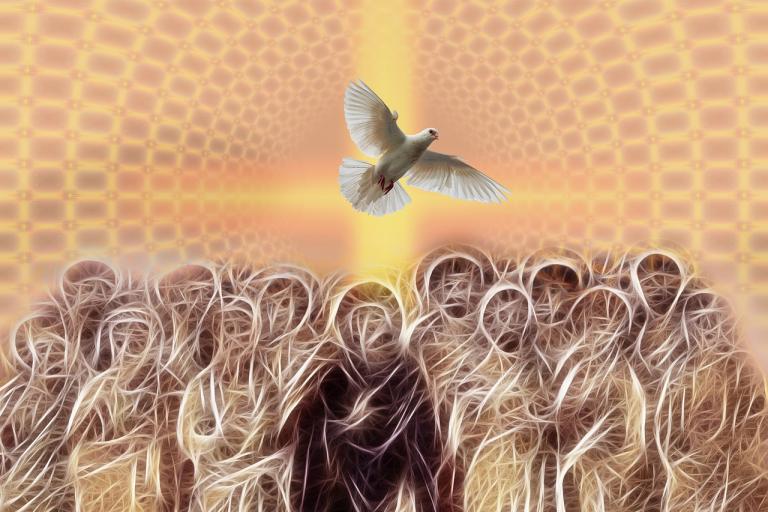 The epidemic has forced churches to resort to online services.  But now some church growth experts are hailing that problem as a new paradigm for “doing church.”

A The COVID-19 pandemic has “propelled the Church into the contemporary world,” according to a report from an evangelical Anglican organization in the UK.  “Last month we were the Odeon, today we are Netflix.”  An “Odeon” is a building designed to feature musical performances; that is, a concert hall.

In the 1950s, the Odeon was okay, but then along came consumer choice, individualism and crowded complex lifestyles. Then came TV film channels, and now Netflix, Prime and others, where you can watch whatever you want, whenever you want, wherever you are on whatever you’ve got. . . .The Government has shut our ‘Odeons’ down, so in response we have stumbled into ‘Homespun Netflix’ and it’s looking promising.

Indeed, churches that want to be contemporary have adopted the concert hall model.  Sanctuaries are dominated by a stage, complete with overhead spot lights, microphones, a drum set, and guitar amps.  The service is modeled after a concert performance, with the band and the preacher putting on a carefully-orchestrated show.  Today, most people turn to the internet and streaming TV, rather than concerts, so why shouldn’t churches adapt accordingly?

Notice that both the concert hall and Netflix models assume that worship should be analogous to entertainment.  Both approaches are very different from the historical approach to church, in which members of a Christian community gather together to receive God’s gifts in the Word and Sacraments in front of a pulpit and an altar.

The study, from the Church Pastoral Aid Society (CPAS), does find some good results from online church services.  According to the authors  Bob Jackson and George Fisher, “Most churches going online have discovered that far more people are accessing their services than ever came to the building. What seemed initially to be a devastating blow to churches may actually generate growth.”

One church reported, “We’ve had a huge number of hits, many more than the number of people in church on a Sunday, connecting with people who would not come to a regular service.”

People are finding it easier to access church online because they can join in the services without feeling concerned about ‘doing the wrong thing’ – like standing or sitting at the ‘wrong’ time,  they don’t have to enter a strange building and meet new people, and they can access the services at a time that suits them.

One church reported: “One previously non-churchgoer said that online she felt comfortable, fully part of the service and so more welcomed than if she had been in the building unsure of how to behave.”

Now this is tremendous for Great Britain, where church attendance has dropped to nearly imperceptible levels.  The internet is indeed a great tool for outreach.  If services posted on YouTube or Facebook can show unchurched people what church is like, convey the Word of God to them, and encourage them to actually come to church, so much the better.  American churches too might want to consider continuing and enhancing their internet presence.

That doesn’t mean that churches should reinvent themselves according to the “Netflix” model.  Watching the Food Network can inform viewers about food they might want to try.  But it is no substitute for eating.

Another church growth expert, Carey Nieuwhof, also advocates “digital” church, but he also complicates the picture.  In his post The Original 2020 Is History, he gives some important data about online services during the pandemic.

Yes, 29% of congregations showed an increase in online visitors over their regular in-person attendance.  But that means 71% did not.

Of Americans who regularly attend worship services, 48% did not tune in to their congregation’s online services; 40% did; and 23% tuned in to another church’s online service.  (The total is more than 100%, since some, over the four weeks being studied, attended their own congregation’s service some times and attended a different one other times.)

That does not strike me as an overwhelming success.  Nevertheless, Rev. Nieuwhof sees “digital church,” rather than just “physical church” as the wave of the future.

Digital technology, he says, will accelerate the trend we are already seeing in the “consolidation” of the church, as smaller congregations close in favor of fewer but bigger megachurches.  And yet, Rev. Nieuwhof says, the physical churches will not disappear.  Here are some of his observations:

The difference in this trend is as stark as JC Penny and Amazon.

JC Penny (which recently filed for Chapter 11), like Sears and ToysRUs, were physical retailers that slowly adapted an online presence, behaving like most people still wanted an in-person experience.

Amazon, of course, started as a digital retailer that gradually moved into physical stores.

What’s surprising is that sometimes the digital connections have been as or more meaningful than the in-person connections. . . .

To put digital church back on the shelf in the new normal is to ignore the greatest opportunity the church today has to reach people.

Seeing digital as optional really does mean your church will end up like malls in the age of Amazon, just hoping for people to show up again.

And it also ignores the fact that many will want digital to be at least an option, if not a preferred method of engagement where geography and other barriers prevent access. . . .

Further, digital scales in a way that analog doesn’t.

Will we still have in-person, physical gatherings and services? Absolutely. But in the future church, if you care about people, you’ll care about digital church.

Notice the other metaphor being used to think about church:  businesses.  Mom ‘n’ pop retailers vs. the big box stores vs. Amazon.com.  Big corporations swallow up the little guys, and digital corporations swallow up the physical shopping malls.  And so it will be with churches.  Again, historically and Biblically, churches were always different kinds of things than business ventures.

Consider the other implications of digital church.  Certainly, the technology can engage more people, with the need for fewer pastors, at a smaller expense, without even the need for large megachurch facilities and campuses.  Since a digital church “transcends geographic, physical and time barriers,” we won’t need as many of them.  We will need few, if any, pastors.  It won’t even be necessary to plan a new service or a new sermon every week.  A library of different sermon topics and musical performances can be put together, and viewers can just click which ever one they are in the mood for at any given time.  As with Netflix.

From the beginning, churches were situated; that is, they existed in a specific place.  Thus, St. Paul writes his epistles to the churches in Rome, Corinth, Galatia, Ephesus.  Today, we have the Roman Catholic Church, the Lutheran Church Missouri Synod, and local congregations of every affiliation in cities, suburbs, small towns, and countrysides.

A community, whether secular or sacred, needs a sense of place.  The church is the body of Christ, so it needs to be embodied.  The Sacraments ensure that it is.  Churches have to do with body, blood, and real presences–of Christ and also of Christians.  Churches exist in time–in redemption history from creation through incarnation and atonement and resurrection to the last judgment, as part of the historical church, in the cycles of life from birth through death, in the church year, in the present, in eternity.

A fully digitized church will bear the same relationship to the actual church–against which the Gates of Hell will not prevail–that virtual reality bears to actual reality.

June 3, 2020
Not Just Teaching but Living Western Civilization
Next Post